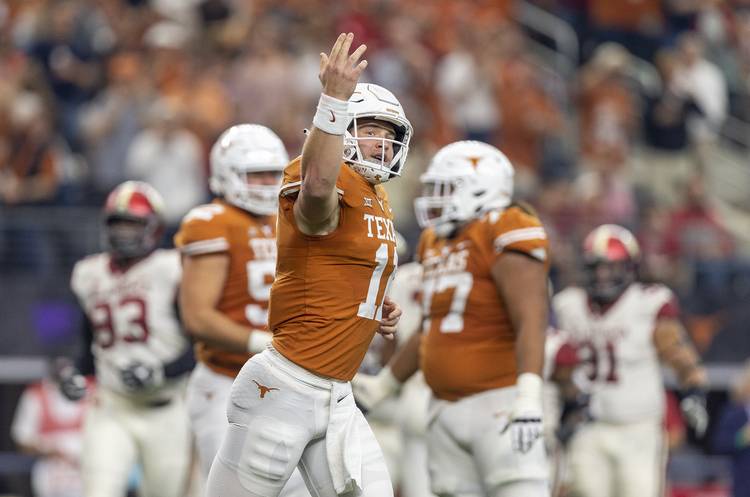 Texas quarterback Sam Ehlinger (11) celebrates a touchdown against Oklahoma in the first half of the Big 12 Conference Championship NCAA football game at AT&T Stadium in Arlington, Texas, Saturday, Dec. 1, 2018. [Stephen Spillman for Statesman]

It comes naturally for some players— not so easy for others — but in most cases, a leader comes through tough times before emerging as such.

In the case of Texas’ Sam Ehlinger, we’ve all heard the story of him losing his dad at a young age before becoming a superb high school quarterback and currently the unquestioned leader of a football team that took a mammoth step forward in coach Tom Herman’s second year.

Ehlinger fits the bill with ease. He has this unshakable confidence and an attitude that’s one part moxie, one part toughness and with just a dash of arrogance — that’s a good thing — to complete his quarterback makeup.

He confidently welcomes the truckload of expectations that are on his shoulders after leading his team to a 10-4 season and a statement Sugar Bowl win over the Georgia Bulldogs.

But he can’t do it alone.

Leadership has to come from other areas, from running back, where Keaontay Ingram takes over the lead role, to wideout, where Devin Duvernay steps up to No. 2 behind Collin Johnson with Lil’Jordan Humphrey now in the pros. And don’t forget the defense, where Jeffrey McCulloch and Malcolm Roach will have to rise in impact on that front seven to complement a deep secondary.

“(Ehlinger) is a leader,” said offensive lineman Sam Cosmi. “When he speaks, we all listen. What he has to say is really important, so as a leadership, I would say one he’s one of our, if not the biggest, leader we have on this team that everybody looks up to.”

The Ehlinger that played as a freshman was out to hit a home run on every play and on several occasions, his desire to be great outweighed the need to make smarter, higher-percentage decisions. Ehlinger the sophomore played much cleaner and fans experienced an improvement level that was reminiscent of Vince Young from his own freshman to sophomore year.

After throwing for 11 touchdowns with seven interceptions in 275 attempts while sharing time with Shane Buechele his freshman year, Ehlinger took flight last season with improvement in every major category. He threw 25 touchdowns with only five interceptions in 425 attempts. That 146.8 passing efficiency rating ranked No. 32 nationally and was 24 points better than his freshman year.

Unlike Young, Ehlinger took over a team that was in a deep losing depression. Now in his second full year as a starter, he is a product of a ton of practice reps and some on-field tough times that helped strengthen his resolve to return Texas to the national elite.

Yes, the Sugar Bowl win was great, but the obstacles he overcame just to get this team to that game cannot be overlooked. The Ehlinger who greeted reporters at Big 12 media days and following the first weekend of fall practice is a player on the rise. And he knows it. His approach, while simple, is the right one.

“What I’ve really learned is to compartmentalize each and every play,” Ehlinger said. “It’s every easy to let the momentum or the crowd or the previous play — because you had a missed assignment — influence what you do on the next play, but it shouldn’t. What I’ve learned is moving forward and focusing on the things you can control … it really helps you play better.”

Funny thing about the quarterback position. It’s the most important job in all of team sports because the quarterback not only touches the ball on nearly every offensive play, but also takes the heat in critical circles, fair or unfair. He has to lead. Very few teams have won a championship with the quarterback playing a subservient role to the other players. Texas went 35 years without a national title, but when Young showed up, things changed, not only on the field but in the locker room.

Young was the Pied Piper of the UT program for two glorious full seasons as the starter, giving defensive coordinators fits while keeping everybody loose in the locker room before games. And guess what, when he  ascended, the others around him, including the coaches, followed his lead.

Texas could be experiencing something similar in the Ehlinger era. While not nearly as dynamic as Young athletically — few could touch VY in that department — Ehlinger has become a tank of a quarterback, embodying the physical toughness of an offensive lineman and the understated brashness of a shutdown corner.

The combination has worked well so far, and with the previous program struggles quickly fading from view, people on the Forty Acres are daring to dream big, reason being they have a leader who exudes total belief in the locker room and in the coaching office.

Should be a fun season.

“The difference from last year to this time is we believe in ourselves and we have the confidence to go out and win,” Ehlinger said. “And we know that we can do it if we stick to what we know.”

The leader has spoken.