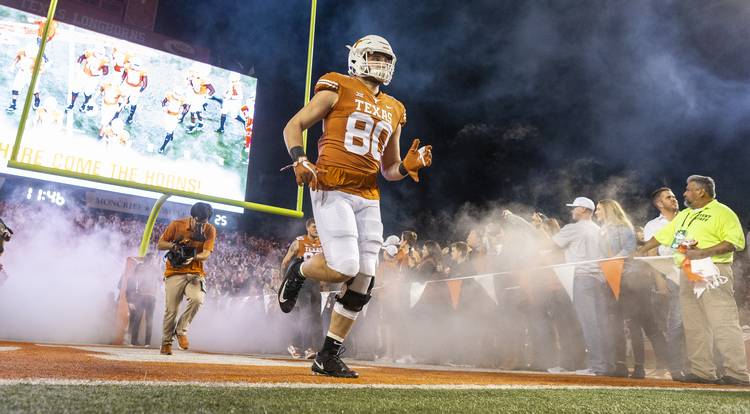 If we get do-overs in another life, you’d be just fine reincarnated as Andrew Beck.

Few Texas athletes got as much joy out of the college experience as the tight end from Tampa, Fla. The football gods rewarded him last year with a career senior season: 28 catches, 281 yards and two touchdowns.

Then Bill Belichick rewarded Beck with $115,000, the highest amount paid to any of the New England Patriots’ undrafted free agents. The website Pats Pulpit noted that someone with “limited contributions in the passing game and comparatively average athleticism” led to Beck going undrafted in the first place.

What’s funny is that if you knew Beck, he’d probably read that and say, “I know, right?”

Belichick loves players who were team captains. Now that Rob Gronkowski is retired, Beck, 22, will get every opportunity imaginable to make the team’s 53-man roster as a run blocker in two tight end formations.

Most Texas fans probably never thought you’d say this, but what will the Longhorns do without Andrew Beck?

“Beck was a big-time player,” senior receiver Collin Johnson said. “He was smart. He’d been in the program for a long time. He’s an old vet, so replacing any vet would be tough.”

Brewer, you remember him, right?

He’s the 6-4 target from Lake Travis who got a scholarship offer from making an eye-popping, one-handed catch in a high school game with Texas coach Tom Herman in attendance. He’s the one that impressed UT coaches as a freshman with his run blocking. And he made that critical touchdown catch in overtime at USC.

But Brewer went into witness protection last year, mostly because of Beck. He played in 13 games, primarily on special teams, and finished with two catches for 19 yards.

That one-handed catching ability was on display again during Sunday’s closed scrimmage. Video clips later surfaced of quarterback Sam Ehlinger rolling to his right, firing a bullet and Brewer making an outstretched grab with his right arm.

“It was a little bit behind me, stuck my hand out and caught the ball,” Brewer said. Asked if he could do that repeatedly this season, he said, “I can’t predict the future, but hopefully a lot.”

Herman is convinced. “We’re going to miss Andrew Beck for a lot of reasons,” the coach said about the two-time team captain and All-Big 12 player. “Those aren’t easy shoes to fill. But you love what Cade is doing.”

In college football, the term “tight end” can have rather liberal interpretations. Some coaches have tight ends that never put their hand on the ground. OK, maybe that’s just Mike Leach. Others just use tight ends as sixth blockers with absolutely no intention of turning them into receiving threats.

Herman has shown he wants to use the tight end position in spots. But that trust must be earned. Last season, Ehlinger hit Beck for a critical 7-yard gain against Oklahoma to help set up the game-winning field goal at the Cotton Bowl. Ehlinger went back to Beck for a pop pass touchdown against Oklahoma State.

Brewer said he had to learn various intricacies when he arrived. “Just little stuff like footwork, hand placement and pass protection, too, I didn’t do that in high school a lot,” Brewer said. “And, you know, that was new to me when I came here.”

So much has been made about offensive weapons like Johnson, Devin Duvernay, Keaontay Ingram and Jordan Whittington, it’s hard to gauge what impact the tight ends will make.

Don’t think the tight end matters? It was a tight end that stopped Herman dead in his tracks while talking with reporters in July at Big 12 media days.

During his afternoon Q&A session, Herman was talking about one topic but kept glancing upward. On the giant AT&T Stadium video screen, there was a photo of Oklahoma’s Grant Calcaterra making the game-winning catch from the Big 12 championship game.

Calcaterra actually had two touchdowns that day against Texas.

“It’s hard for me to watch that catch on the Jumbotron,” Herman said.

Brewer doesn’t have the size that other headline-grabbing tight ends do. Stanford’s Colby Parkinson is 6-7. Missouri’s Albert Okwuegbunam is 6-5, as are Wisconsin’s Jake Ferguson and Penn State’s Patrick Freiermuth.

In many respects, Brewer has a clean slate. Nobody expects him to be Beck. Same as nobody is expecting Leitao to be something he’s not, either. Both players are expected to contribute in some way, though. It’s just not clear at the moment.

“Yeah, I think I love Cade,” offensive coordinator Tim Beck said. “Steady guy. He had a great spring. He’s having a really good fall camp for us right now. Veteran player, understands the game, got a great feel of being a tight end.

“Our young guys are all good players,” Beck added. “Their head spins a little bit from the whole offense-defense, adjust to this route in terms of this or that. But in terms of their athleticism, their toughness and their ability, they’re all going to be great players for us.”

Beck noted the Horns will likely need someone to step forward “because there’s not a lot of depth in that room.”

Golden: Cedric Benson pulled no punches in his short time with us