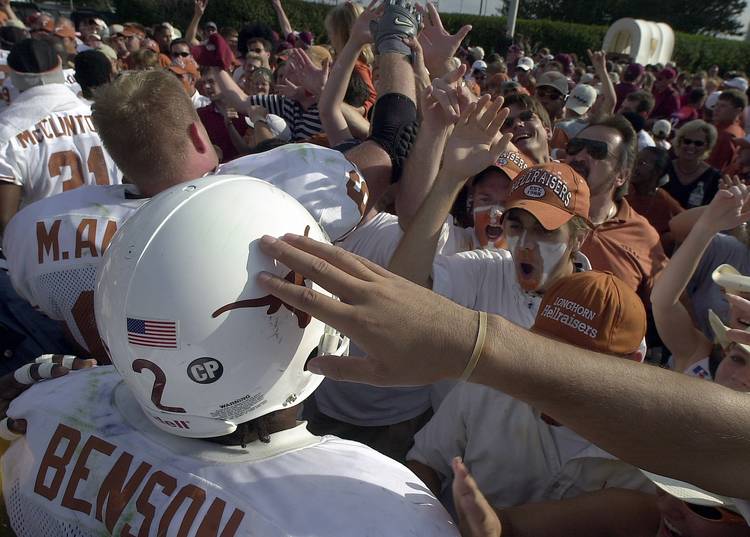 A fan reaches over and touches the helmet of Texas running back Cedric Benson as he and the team walk to the locker room following their 21-7 victory over Texas A&M at Kyle Field in College Station in 2001. Benson scored two touchdowns that day. (Rodolfo Gonzalez/American-Statesman file)

I slept in Sunday. Turned the ringer off on my phone. It was one of the last free weekends before the season starts.

There were so many messages when I woke up. That’s how I heard the news after everyone else. Cedric Benson, whom I covered for four years when he was a star running back at Texas, had died. He’d been riding the same motorcycle that showed up on my Facebook story feed the night before. I thought then that Benson had switched from loving BMW cars to BMW motos. Was going to ask him about it the next time I talked to him.

I’ll be honest. When you cover teams and athletes as a beat writer, you’re not supposed to pick a favorite player or coach. But Benson, truly, was one of my all-time favorites.

He’d reached near mythical status playing for Midland Lee during an era when the term “Friday Night Lights” was first entering our football glossary. Think about it, he led the best high school team in the country to three straight state championships. He embraced expectations, then escalated them. The best ever do that.

He seemed to already be an old soul when he arrived in Austin. That was back in 2001. College football fans knew him around the country. I think the Washington Post wrote a story when he’d committed to UT. There was no social media to build up a player to unrealistic expectations. Benson already had them. They weren’t inflated.

The last time he and I had a conversation that wasn’t via text message was in January. I was writing a story on past No. 1 players on the American-Statesman’s Fab 55. He was our top guy in 2001. We quickly caught up beyond what any of us would post on Facebook. He told me he was looking into getting into the wine business. He had been a mortgage broker. He sounded like he was enjoying himself. We talked about our dogs and families. Normal sort of stuff.

I asked him about the first time someone recognized him. He said that was in seventh grade. Fans in Midland already were touting him as the next great running back when Benson was just 13.

He admitted he started growing dreadlocks in high school because he wanted to be like Ricky Williams. Even budding legends have role models. He told me he never really wanted to go anywhere else but Texas and said he didn’t want to drag out the recruiting process.

He didn’t quite reach Williams’ status at UT. That was OK. Williams set the NCAA rushing record and won the Heisman. Benson finished his career as second best in UT history, ahead of Earl Campbell. I remember writing about him breaking Williams’ freshman rushing record. I received a fax from Campbell’s office with a copy of the article and a hand-written “Don’t forget about me.”

We won’t. Benson always will be connected with Campbell and Williams, UT’s two Heisman winners.

It did bother Benson that he wasn’t being considered for the Heisman in 2004. We were in Orlando, Fla., for the ESPN College Football Awards after the regular season ended. Benson won the Doak Walker as the country’s best running back. He told me as an aside he was going to be honored as ABC’s national player of the year. He liked that, but I wasn’t supposed to tell anybody till it was announced.

He thrived as Texas switched offensive styles, evolving from an I-formation team to the newfangled zone read, which would better suit the style of quarterback Vince Young. Benson gained 5,540 yards in his career. It still ranks ninth-best all-time in the NCAA.

RELATED: Cedric Golden — Benson was one of the most honest UT athletes ever

Go back and look at Benson’s highlights on YouTube. His biggest talent was how effortlessly he could pick a weakness in a defense. It’s like his mind could instantly calculate a physics problem — how much power was needed to open a hole and how quickly he needed to accelerate through it before it closed.

Benson never won a national title or a Big 12 championship at Texas. He had to settle for victories in the Holiday, Cotton and Rose Bowls.

He never beat Oklahoma. But, oh, how he did love to pound UT’s other rival, Texas A&M. He rushed for 283 yards with four touchdowns in 2003 at Kyle Field. It was the most yards ever allowed by an Aggies defense. The record stood until 2016.

In Benson’s career finale against A&M, he gained 165 with a touchdown. That was also his last game at Royal-Memorial Stadium.

His efforts against Oklahoma State in 2004 also were amazing. The Longhorns were down 35-7 at home to the Cowboys. By night’s end, UT had surged to a 56-35 victory. Benson ran for 141 and scored five times.

Off the field, Benson always loved expensive cars and Rottweilers. I liked cars I could afford and fuzzy, smaller dogs.

Back in 2003, right before Easter, I picked out a blonde puppy. It was my present from the Easter Bunny. Silly, right? I wanted to give him an iconic football name, and it had to start with a B. Tom Brady? Brett Favre?

How about Benson? The name stuck. Benson always was a football dog.

As a high schooler: Won three Class 5A state championships as the star running back for Midland Lee, finishing his prep career with 8423 yards. He holds the distinction of being the first high school player to grace the cover of Dave Campbell’s Texas Football magazine.

As a pro (2005-12): The fourth overall pick of the 2005 NFL draft, Benson played for the Chicago Bears and Cincinnati Bengals in his eight-year career. He finished with 6,017 career rushing yards and 32 TDs.

Bohls: Cedric Benson did things his way and met his problems head-on