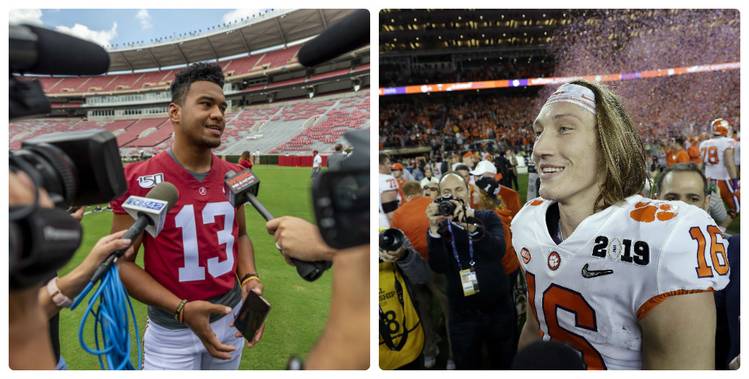 Who's the safest best to win this year's Heisman Trophy? Alabama's Tua Tagovailoa (left) and Clemson's Trevor Lawrence (right) are the odds-on favorites, but a lot can happen between now and December.

Welcome to Craven’s Corner. The goal of this column is summed up by the great American philosopher Tupac Shakur: “We’re trying to make a dollar out of 15 cents.”

Sports gambling is no longer taboo. The days of the corner bookie are dwindling as more states legalize sports betting and more online sites become available.

Before we begin making money, let’s go over gambling verbiage.

There are different bets we’ll use throughout the season. We’ll bet on game lines, which is self-explanatory, over/under, futures and prop bets. The over/under concentrates solely on the total points, while futures and prop bets deal with future winners like the Super Bowl. Props tend to be player-centric, like whether Sam Ehlinger will rush for more than 100 yards against Louisiana Tech, for example.

Betting looks difficult, but it is easy to grasp. A negative number denotes the favorite. The number after the negative represents how much money you’d need to bet to win $100. For example, a -265 favorite would require a $265 bet to win $100. Conversely, a positive number is the underdog. The number following the positive represents how much money you’d make on a $100 For example, a +265 bet means $100 earns you $265.

Got it? OK, let’s make some money.

A shortage of real games this week means we’ll focus mostly on futures. We’ll use Bovada.lv as our general sports book.

Saints +850 to win Super Bowl: The point of a future is value. The two favorites are New England and Kansas City, which are both AFC teams. The Saints provide great value at +850 and deal with an easier conference with the NFC. It’s hard to go back to a Super Bowl, so I’m discounting the Rams. And the Bears aren’t quite ready. That leaves the Saints as the conference favorites. Maybe they wouldn’t be favored in the Super Bowl, but +850 is more value than you’d get in a one-game setting against any AFC champion.

Ravens +300 to win AFC North: Color me skeptical of the Browns’ ability to keep it all together and win the conference with too many personalities jockeying for control in the locker room. Cleveland is undoubtedly talented, but there isn’t much value to bet them at +115. With the Steelers in a spiral, the Ravens could be a sneaky pick to win the AFC North with a team built around running the ball and a strong defense.

Seahawks +285 to win NFC West: It’s statistically unlikely that the Rams repeat their success from 2019. Young teams tend to take a step backward after coming so close to a championship. Seattle is still home to the division’s best quarterback in Russell Wilson. I expect the Seahawks to challenge for the title and the value is there at +285.

Cowboys +140 to win NFC East: Dallas would be the division favorite if Zeke Elliott was in camp. The holdout has the bookies worried, and that’s propelled the Eagles to become a -110 favorite. The NFC East is always a dogfight and I expect Elliott to be back on the field sooner rather than later. A solid defense and an improved Dak Prescott is all the Cowboys need to outlast Philadelphia.

Ohio State +175 to win Big Ten: It’s rare to get a conference favorite with + odds. The Buckeyes lost a starting quarterback and Urban Meyer, though Ryan Day recently named former five-star recruit Justin Fields the starter. I simply don’t believe in Michigan or the ability to integrate a whole new offense in one year under Jim Harbaugh. Ohio State is the safe bet and it even offers you solid value.

Georgia +250 to win SEC: Alabama is -155 to win the conference. That isn’t a ton of value for a future bet. The real value is with Georgia because it should skate through the SEC East, giving the Bulldogs a one game shot to knock off Alabama. Those odds aren’t great, but +250 now is more than you’d get if the two played for the SEC championship in December.

Memphis +265 to win AAC: This is one of my favorite bets of the preseason for the NFL or NCAA. UCF is the dominant force in the AAC, but it is Memphis with a better chance of winning its division with a -130 in the West compared to -125 for UCF in the East. Yet it’s UCF considered the conference favorite. I don’t buy it. Give me Memphis in the AAC championship.

The Heisman: Some bets simply don’t produce much value, and that’s how I feel about the Heisman race right now. The two clear favorites are Clemson quarterback Trevor Lawrence and Alabama quarterback Tua Tagovailoa, both at +265. The best bet is probably picking your favorite between the two and going for it. Fields is good value at +900 in case Ohio State runs the table, as is Ehlinger at +1500 if the Longhorns truly are back.

NCAA champion: Same as the Heisman race for me. I consider Alabama and Clemson the runaway favorites and both are offered at +225, which isn’t a ton of value for a season-long wager with a ton of variables between now and January. Ohio State at +1000 is my favorite bet here, but I’ll personally stay away from this one due to the odds.

There is only one major football game this weekend — Florida vs. Miami. Week 1 is the hardest week to bet in any sport, but especially in college football because of the roster changes that take place after every season. I like to bet low for the first few weeks and slowly build toward larger, more confident bets as more clear evidence about a team is available.

Miami +7.5, and the Over at 47: The over/under looks juicy. Forty-seven is an insanely low number for a college game. My general rule is to pounce on any prime-time game under 50 because those games tend to be more exciting than it would suggest on paper. Florida is a good team and a contender in the SEC East, but 7.5 points is too much for me to give in an opener against an in-state rival. I’ll take the Hurricanes with reluctance, but I’ll risk more on the over.

Halliburton: For those who covered Cedric Benson, No. 32 left a long, lasting legacy