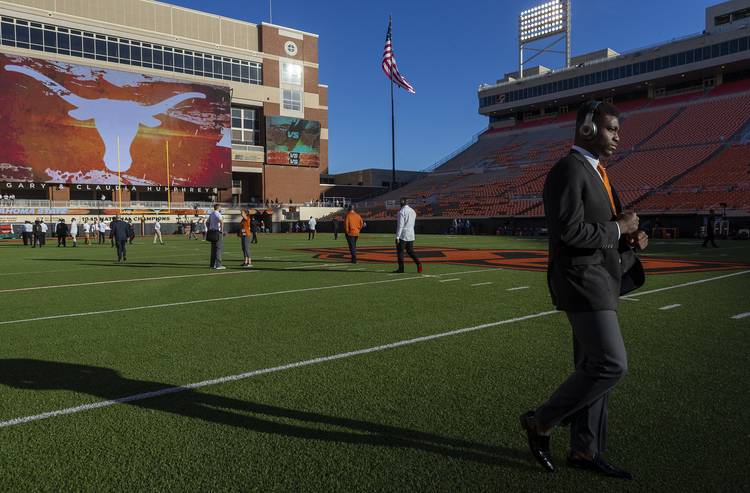 Your trusted scribe visited Texas men’s basketball practice earlier this month. Chatting with coach Shaka Smart, it was interesting to hear him reflect on the players’ emotions after winning the NIT.

As nice as that was, winning the NIT isn’t the goal.

“You know, they didn’t like that feeling when we sat and watched the (NCAA Tournament) selection show last year,” Smart said. “They came here to do big things. They know what Texas means.”

Big things at Texas means winning Big 12 titles and competing for national championships. To do that, you need big players. You need athletes who revel in the pressure and love the big stage.

At Texas, like it or not, there is always pressure. You are always on a big stage.

This year, we’re tweaking the criteria to make the American-Statesman’s third annual Texas Ten, our annual preseason list of top UT athletes to watch during the coming athletic year.

The first two years, we selected athletes that needed to play big for their teams to have big success. This year, we’ve added in another factor: Breakout star potential.

Let’s be honest, if we’re putting together a list of the top 10 most important athletes at UT, we’d name Sam Ehlinger 10 times and call it a day. No, this is about who’s trending up, maybe someone you haven’t heard of, but definitely someone who can breakthrough and shine.

The football team has a lot of good candidates for this list, including defensive tackle Keondre Coburn and running back Jordan Whittington. Ossai played in all 14 games last season, started two and ended up with 20 tackles and one sack. He’s moving into a starting role this season for defensive coordinator Todd Orlando, who has been cross-training the sophomore at multiple spots. With his speed, Ossai should be all over the place.

Outside hitters can be highlight-reel machines with their massive arm swings. Or they can be rendered powerless if there’s one or two good blockers on the other side of the net. Eggleston had 312 kills last season, including a season-high 18 against Kansas State. Longtime outside hitter Micaya White is the Sam Ehlinger of UT’s volleyball team. Both White and Eggleston will need excellent setters, to be sure. Both will get the Gregory Gym crowd on its feet.

One of Liddell’s most excitable moments last year came in the NIT championship win over Lipscomb. He drained a 3-pointer from the left wing, dropped his right hand and did a three sign while running the other way. The look on his face was pure joy. Smart needs a lot more of that this year from the 6-8 sophomore. Jaxson Hayes left for the NBA and Dylan Osetkowski graduated. The frontcourt is open, which means Liddell’s time is now.

The 6-5 sophomore played in 31 games last season, but started only one. Still, she had a team-high 20 blocks and showed double-digit scoring potential. Coach Karen Aston gave Collier and Joyner Holmes a boost by hiring Terry Nooner, who was the player development coach with the Cleveland Cavaliers. Nooner will work almost exclusively with UT’s forwards. Collier came to UT with a staggering résumé. Time to build on it.

This 6-2 freshman from La Mesa, Calif., picked a perfect time to join the Longhorns, which just won the national championship. Woldeab was the third-ranked recruit in the country, and UT’s class was pegged second overall. Woldeab will find he’s walking into a veteran team. But they shouldn’t dismiss him, either. He tore up the junior circuit, and he’s just the right kind of player to help keep UT’s momentum going.

Cooper made somewhat of a splash year last season, winning Big 12 freshman of the year honors. She averaged a team-low 72.28 score, had 19 rounds at par or better and won or shared first place at two events. Cooper helped the Longhorns have the best women’s season in school history by reaching the NCAA quarterfinals. The UT men’s team found ways to build on NCAA success. Cooper and Co. should keep it going.

The last few years, all the UT swimming headlines have been dominated by Olympians and NCAA championships. Time for some new blood. Krueger, a sophomore, has quite the friendly battle going with teammate Drew Kibler in the 50- and 100-yard freestyle events. Krueger won Big 12 titles in both events and finished fourth in the 100-yard freestyle at the NCAAs. Healthy competition is good, especially coming off a year where UT finished second at the NCAA championships in its own pool.

Flannel likely ran straight through her hometown of Alvin and left a vapor trail. Her freshman year at UT was rather sensational. Flannel was a first-team indoor All-American in the 200 meters. Then, she finished second in the 200 meters in 22.71 seconds at the Big 12 championships and was part of the winning 400-meter relay team. Flannel made it to the NCAA championships, finishing 12th in the 200 and participating in the 400- and 1,600-meter relay teams.

Once the postseason arrived, it was the Miranda Elish show. But O’Leary was the one carving out her niche in the spotlight beforehand. She blew it past No. 8 Tennessee, threw a perfect game against Baylor and had the nation’s lowest ERA before an ankle injury in April threw her off kilter. She finished the season by taking four losses in her last five appearances, something that likely fueled her entire offseason.

If the scooters don’t get the Texas infielders, age or the major league draft sure will. Ford made 40 starts last season at second base, drove in 19 runs and hit four doubles. He’s got pop, as a 3-for-5 day with six RBIs against West Virginia showed.

Heading into the 2020 season, Ford becomes a team veteran that must be a key contributor. Every Longhorn should want to prove the snake-bit 2019 season was either a fluke or some cosmic joke. Being strong up the middle is a strong way to get the Horns out of the Big 12 basement.

Bohls: If you’re worried about Texas’ running backs depth, there’s a reason — you should be