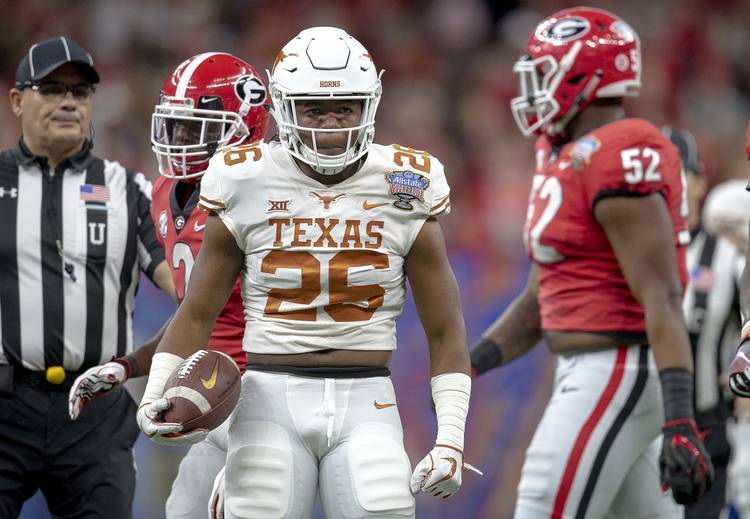 So Texas is a week away from its season opener against Louisiana Tech, and Tom Herman has to be holding his breath about his running backs, outstanding though they might be.

His top rusher, Keaontay Ingram, has missed a lot of work in practice with a knee bone bruise.

His No. 2 running back, Jordan Whittington, is a freshman who was moved from receiver to the position, but has never taken a college snap and has been dealing with a minor groin injury as well.

His No. 3 running back, Daniel Young, is regarded as a rugged, third-down back, best used in the fourth quarter against exhausted defenses, but it was revealed Friday he has a high ankle sprain and will be out “several weeks.”

The fourth, Kirk Johnson, unfortunately is an injury to be named later, now sidelined by an injured clavicle.

After them, Herman has walk-ons. Very good walk-ons but still walk-ons.

Everybody else transferred. Kyle Porter? He’s at Houston. Toneil Carter? Now playing for Sam Houston State. Tristian Houston? No idea where he landed.

Tryouts, anyone? Where’s the waiver wire when you need it? It should give a lot of these players pause when they rush into the transfer portal, looking for greener pastures and more carries.

Is this any way for a team ranked 10th in the Associated Press preseason poll to start a year when it’s a legitimate dark horse for a College Football Playoff berth?

It’s not really Herman’s fault. He was counting on freshman Derrian Brown out of Georgia to get in the mix, but Brown suffered a brain aneurysm and had surgery before he ever arrived on campus and may never play again.

You’d be correct if you’re thinking running back is an area of concern. It is. Without question, the biggest concern. The talent is there, but are they healthy enough to be on the field Aug. 31? Insiders say yes, but we’ll see.

“You need to have at least three guys ready to play every Saturday,” running backs coach Stan Drayton said Thursday.

Texas has divulged little substantive information on their health, but running back may be the thinnest position on the team outside of quarterback, where only the starter has played a single down of college football and the two backups are freshmen, and that sets off new anxiety pangs.

If this all appears to be a little fragile, you may be on to something.

Guess we’d better start doing our research on walk-on running backs Jarrett Smith and Mason Ramirez, who had been a safety and on Monday was placed on scholarship. The 5-10, 210-pound Ramirez, a senior from Round Rock, was the player of the game last scrimmage with 127 yards rushing, and Drayton raves about Smith.

“He’s a scholarship guy,” Drayton said of Smith. “He’s sawed off, but he’s patient. And Jaren Watkins is 5-4 and 145 pounds but these guys are some tough nuts. They don’t make a mistake.”

Herman has to be nervous.

“And if we get another one dinged up, we’re going to be in trouble from a depth standpoint,” Herman understated.

Herman said the health of the running back position remains his biggest concern, going into the final week of practice before game week prep.

If Ingram and Whittington both go down, the season just might blow up. It wouldn’t be the worst idea to have Smith ready.

Texas will not have a great year if Sam Ehlinger is the team’s leading rusher, as he was two years ago. Not sure the junior quarterback can survive that kind of workload.

He’s already got enough on his plate to manage the offense, to spread the ball around, to score in the red zone and be the team’s heart and soul.

Herman hasn’t really said how many designed runs will be called for Ehlinger this fall, but probably fewer than the public might think. That said, a coach would be remiss if he didn’t play to his strengths, and Ehlinger’s surprisingly elusive style, combined with an undeniable power, are one of Texas’ major assets. And Herman has to rely on them, maybe more than ever, given the shallow running back depth.

But Sam will need help. Lots of it.

The hope remains that Ingram will be the workhorse and Whittington will spell him, and both will be part of the passing game as receivers as well. They could be as good a tandem as Ingram and Tre Watson were last year, not that a 91st national ranking scared anybody.

“Keaontay can draw up every play on the board,” Drayton said. “He understands where the reads are, and he’s light years ahead of where he was. I expect him to have a breakout year.”

If he doesn’t break down. Drayton said he has been practicing this week.

That duo could be a solid threat, but Ingram missed two games last season and had a reduced workload because of a balky knee and is hurt again. While the media and public clamored for more touches for Ingram — the one real breakaway threat on the 2018 team — the coaching staff was keeping close tabs on his carries and his health.

So when he suffered a knee bone bruise a week ago to halt his full-scale workouts, you could sense the hush fall over Longhorn Nation.

Ingram’s supposed to be the bellcow, not an injury-prone back who can’t play to his potential. It’s far too early to sound any serious alarms, but it’s also concerning.

Texas won’t go anywhere if he’s out for any meaningful time, because this team is not equipped to put a band-aid on the tailback position. It’s doubtful Texas has a 1,000-yard back.

Whittington looks the part, and Ehlinger said he “looks like he’s 24 and on ‘roids.” He’s that ripped.

But no one sees him getting the ball 25 times a game. Not yet, anyway.

Heck, no one saw Ingram get that many touches in his freshman season. Thanks in part to injury, he never had more than 19 carries in a game, that coming against Baylor when he also went over 100 yards for the only time. In six games, he had 12 carries or fewer.

For his part, Ehlinger said he has no real anxiety about the injuries piling up at running back. In fact, he said he had to tell Ingram to stop jogging the other day.

But if the quarterback is scared to see Ingram even jogging in late August, that can’t be a good sign.

Do Alabama and Clemson operate this way? Surely they have running backs stacked on top of running backs at those places. Heck, Nick Saban lost two running backs to the NFL — Josh Jacobs to Oakland in the first round, and Damien Harris to New England in the third.

Alabama has had 14 running backs drafted in the last 13 years, with 10 going in the first three rounds and three making Pro Bowls.

Texas, on the other hand, has had three running backs drafted over that same span. And the latest, D’Onta Foreman, taken in the third round by the Texans, has already been cut and picked up by the Colts; he tore his biceps Monday, putting his career on hold.

The Longhorns have had four Big 12 rushing champions, but only Foreman since Jamaal Charles in 2007.

That doesn’t seem possible considering the rich legacy at a school that has produced Earl Campbell and Ricky Williams and Cedric Benson. Herman’s out to restore that tradition and has a commitment from five-star recruit Bijan Robinson, who was offered by Alabama, Oklahoma, Ohio State and others and who will be here next year.

But that seems a long way from now.

Eyes on Texas: This year’s Texas Ten has some not-so-obvious picks on our list of 10 Horns to watch