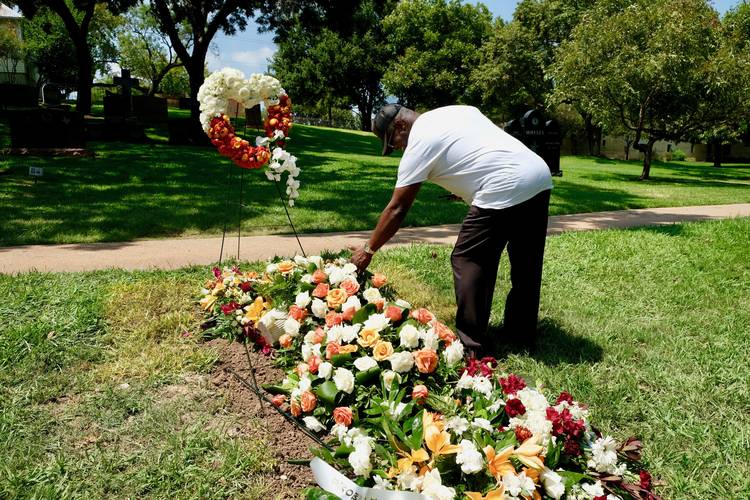 How you feel about Cedric Benson being buried at the Texas State Cemetery with Stephen F. Austin, 14 Texas governors and four Medal of Honor recipients probably is directly related to how you feel about sports.

I’m going to shirk my constitutional duty as a columnist to tell you what to think about this. I’ll offer some data and encourage you to think about it.

Let’s be clear that I categorize myself as a big sports fan who sometimes has twinges and pangs about how big sports has become in our society. Things and people spark those twinges and pangs. Things like point spreads on NFL preseason games. People like Indianapolis Colts fans who booed Colts quarterback Andrew Luck as he left the field Saturday night after word spread that he was retiring.

So do sports figures belong in the Texas State Cemetery? It’s a hallowed ground that proudly and properly bills itself as “the final resting place of governors, senators, legislators, congressmen, judges and other legendary Texans who have made the state what it is today.”

Here’s what one reader asked: “So, how does being a football star qualify someone to be buried in the Texas State Cemetery?”

The reader asked for anonymity because “Football is the No. 1 religion in Texas and the U.S. and, as a retired minister, I wouldn’t want to appear to be anti-religious. I do wonder, however, why being a football star entitles someone to burial with former governors and other state big-wigs?”

The rules for qualifying for the honor of State Cemetery burial are simple, though not without a subjective component. Automatic eligibility goes to legislators, elected state officials and appointed state officials who won Senate confirmation and served at least 10 years in office. People also can get in via gubernatorial proclamation or legislative resolution OK’d by the three-member, gubernatorially appointed cemetery committee, now chaired by Benjamin Hanson of Austin.

It’s a statement broad enough to allow for consideration of a variety of worthy Texans. Benson’s significant contribution to Texas history and culture? He was the star running back on a Midland Lee High School team that won three state titles, he had four years at the University of Texas that made him the school’s second-leading, all-time ground gainer, and he spent eight years in the NFL.

Again, I’ll let you decide if you think his too-short life of 36 years qualified him for the State Cemetery. There’s no need to delve here into his brushes with the law. Benson was buried Monday near other sports figures and the small temporary marker where former UT President Bill Powers recently was interred.

Sports-related, there’s also Wally Pryor, whose headstone calls him “The Voice of the University of Texas Longhorns.” The cemetery has a monument for Dallas Cowboys Coach Tom Landry but he’s buried in Dallas.

(Lundquist is among those who’ve had a headstone placed while still alive to enjoy it. His includes some of his memorable calls, including “Yes sir!” when Jack Nicklaus won the 1986 Masters.)

A few other names you might recognize on the State Cemetery’s precleared list: Larry Gatlin, Ken Starr, Karl Rove, Jerry Jeff Walker and Dan Rather.

Rather’s not the only journalist who’s passed cemetery committee muster. Already interred in the State Cemetery are longtime Capitol correspondents Bo Byers of the Houston Chronicle and Jack Keever of the Associated Press.

Living journalists on the precleared list include Dave Montgomery of Austin and former American-Statesman cartoonist Ben Sargent and his wife Diane Holloway, this paper’s former TV-beat reporter. Both, appropriately, have reservations in the cemetery Statesman’s Meadow section, which probably is not named for my favorite local daily newspaper.

Sargent is a Pulitzer Prize winner, as is local author Lawrence Wright, who’s on the cemetery’s precleared list. Ken Towery, who won a 1956 Pulitzer for the Cuero Daily Record, was buried in the State Cemetery in 2016.

Sargent told me he didn’t inquire about it “until I retired from the active-journalist ranks.” He said state Sen. Kirk Watson, D-Austin, “helped me through the process, which at one point stalled for several years because the people on the pertinent committee were not fans of my work.”

Many of you will recall that Sargent made a habit and career out of drawing pointed little pictures about politicians. When opposition to allowing him in came up, Sargent recalls asking Watson, “Really? About a quarter of the guys out there were engaged in an illegal, unconstitutional armed insurrection against the United States, and I’m not good enough to get in?”

“But patience prevailed, and this is one thing we can check off the list,” Sargent told me.

There are 1,816 Confederate veterans buried in the State Cemetery.

Montgomery, who now freelances for The New York Times and other publications, told me he and wife Linda applied so they can be buried near her parents, Kyle and Vivian Thompson. Kyle Thompson was a longtime Texas journalist and press secretary. More significantly, during World War II he was part of the “Lost Batallion” captured by the Japanese and held for 42 months.

The Cemetery Committee also has approved former Texas Monthly Publisher Mike Levy, who I watched laid to rest in the State Cemetery in 2016. Oh, he’s still quite alive. But, because he’s Levy, he graciously (and enthusiastically) agreed to pose, prone, in front of his headstone so I could shoot a photo. He looked good there.

Do football players deserve the honor of burial in the Texas State Cemetery? It’s a judgment call. I haven’t been able to connect with any of the committee members this week to get their thoughts on the judgment they made about Benson, but they clearly believed he had earned State Cemetery burial.

Larvin Jefferson agrees. I ran into the Huston-Tillotson University worker Monday at the State Cemetery a few hours after the private burial service for Benson.

“He was a good example to many people,” Jefferson, 56, told me as we stood at the flower-covered grave. “Sad that he had to go, yeah. But we all have to accept that, that sacrifice. Part of the sacrifice is giving up the earthly life and going back where we came from.”

And Jefferson wondered aloud about the high points in Benson’s life. Jefferson is a sports fan. “If I could just come out of that tunnel wearing an orange and white jersey,” he said. “That would make my day.”

“Unfortunately,” Jefferson said, “on that Saturday night when he went out, he didn’t know what was around the corner.”

We both agreed none of us ever do.