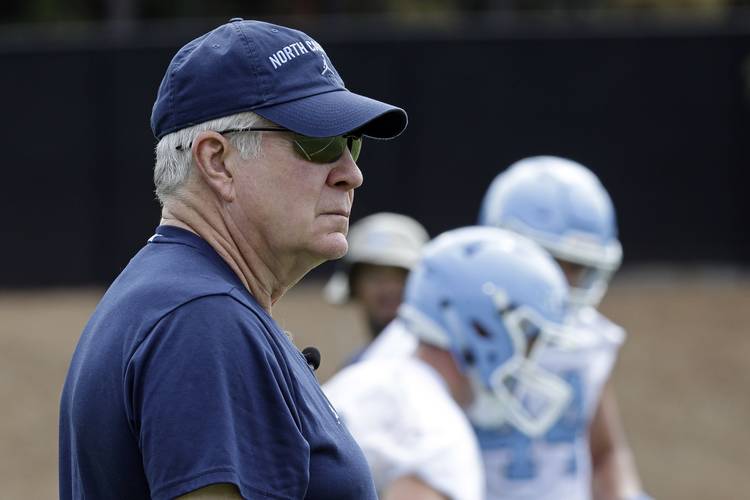 So he was five years removed from his last coaching job, comfortably ensconced in a less stressful but also less rewarding television analyst’s position and already secure with an induction into the prestigious College Football Hall of Fame.

But North Carolina athletic director Bubba Cunningham called him out of the blue as he was fresh off the ESPN set one afternoon last November and posed an intriguing question.

“We’ve made a change,” said Cunningham, who had just fired Larry Fedora. “Would you take the job as head coach?”

Mack immediately called his wife, Sally, who was in Austin at the time, and asked her if she was at all interested. She quickly gave it her blessing.

Five years after leaving Texas in a messy parting following a decorated tenure second only to that of Darrell Royal, the 68-year-old Brown is back in coaching as the new man in his old job. And it happened fast.

“It was a matter of hours,” Brown said of the whirlwind pace.

Just like that, he was returning to the sidelines where he won 238 games and a national championship. He’d been contacted by other jobs, SMU among them, but none had the appeal of the Tar Heels, so he decided to come home.

This is Mack’s second act. And if it’s half as successful as the first, he’ll do quite well.

Brown is retracing his steps, coming back to the place that truly launched his career as a Hall of Fame coach with a mission of re-energizing both himself and a languishing program that he had built from scratch more than two decades earlier.

He’ll have to do so again.

Curiously enough, the Red Bull-swilling, iron-pumping Fedora is now in Austin, one of Tom Herman’s slew of analysts, while Brown is picking up the pieces at a very respectable but slumping Power Five program that has won just five games over the last two seasons and is picked near the bottom of the Atlantic Coast Conference.

But Brown couldn’t be happier.

He’d missed the buzz of game day and the adrenaline rush of decision-making. He could watch up to 20 games a day on the six big television screens. He preferred being in the booth over the studio and found himself thinking what he would do on third-and-8. The thrill never left.

He’s still the charismatic, charming Brown who never forgets a name or a face and may have been born for politics. He wooed talent-rich recruiting classes to Austin and won a pair of Rose Bowls, a national title in 2005 and a berth in a second national championship game that turned sour with Colt McCoy’s injury to his neck and shoulder on Texas’ fifth offensive play against Alabama.

He would not return, and Nick Saban took advantage of a shell-shocked Longhorns sideline and a raw but gifted Garrett Gilbert at quarterback and rode Texas turnovers to the title in Pasadena. That well could qualify as the biggest injury in the history of Texas football.

Brown embraces that notion and goes even further.

“I think it was one of the biggest injuries in college football history,” he said in a half-hour phone interview. “That changed where Texas went, but also where Alabama went.”

He may have accurately described the aftermath of that title game in January 2010 because the Longhorns slipped to a stunning 5-7 record the following season and didn’t post double-digit wins again until 2018. Meanwhile, the Crimson Tide parlayed that win into the most dynastic run in the game’s annals with five championships in 10 years.

Neither Texas nor Alabama has ever been the same.

Mack admitted he moped during that 2010 season, and Saban rode the victory to unprecedented heights.

During the decade since that Rose Bowl nightmare, Brown has watched as others have taken their teams to the mountaintop. Urban Meyer did it in Columbus before burning out. Bob Stoops grew weary at Oklahoma. Dabo Swinney has ushered in his own era of dominance with two titles in the last three years, and is doing it in the same conference where Brown now competes.

Whereas Florida State at one time muddied the waters for Brown’s Tar Heels and Oklahoma held the upper hand against his Longhorns, Mack finds himself back in treacherous waters against the Clemson machine and a coach he once mentored early on.

Small steps for this North Carolina team that has won just two of its last 16 ACC games.

“We’re still undefeated, so I’ve got at least another week,” Brown joked.

Did friends and colleagues suggest he was nuts for getting back into the perpetual grind of coaching?

The 28,400 season tickets sold are the most since 2008. Brown has 23 recruiting commitments already. The buzz is palpable as the opener with South Carolina and his former UT defensive coordinator Will Muschamp grows near. Brown’s even started a new tradition of lighting the campus Bell Tower blue after Tar Heels victories, which reminds of his very first win at Texas at home over New Mexico State. Still remember Mack and Sally driving on campus hours after the victory, Fritos and Dr Peppers in hand, just to see the orange glow of the UT Tower.

His current situation reminds him of his first two years in Chapel Hill when he had to survive consecutive 1-10 seasons.

“It’s funny,” Brown said. “It’s like a 30-year time lapse. Sally said nothing changes here but us. But the facilities here are so much better than when I left. Our talent’s better, too.”

But it’s young talent, especially at quarterback although the team’s strengths lie in the offensive and defensive backfields. He announced he’s starting a true freshman, Sam Howell, a native North Carolinian who broke the state’s all-time passing marks and will start his first college game Saturday.

“No. 1, I know Texas fans like a good quarterback controversy, so I’ve got to keep that up,” Brown cracked. “But he was here in the spring, so it’s almost more like he’s a redshirt freshman. He’s been very accurate, he’s mature and we think he has a chance to be really good.”

Most Texas fans want to see a revival of fortunes for Brown, who resurrected a Longhorns program and delivered the school’s first national championship in 35 years, but don’t look for Texas on any future Carolina schedules.

“I doubt Texas would want us. And I don’t know if we’d want them,” he said. “I’m going to fix things that are broken. When we lost at Texas, we thought it was the end of the world. Now we’re going to celebrate any ugly wins.”

He might not be as fortunate this go-around in his career because he’s not coaching in a state flush with as much talent as the Lone Star state, and he has a deadly, front-loaded schedule that could foretell a tough first season.

Just don’t tell that to the ever-optimistic Mack.

Herman: Does a Texas football player belong in the Texas State Cemetery?