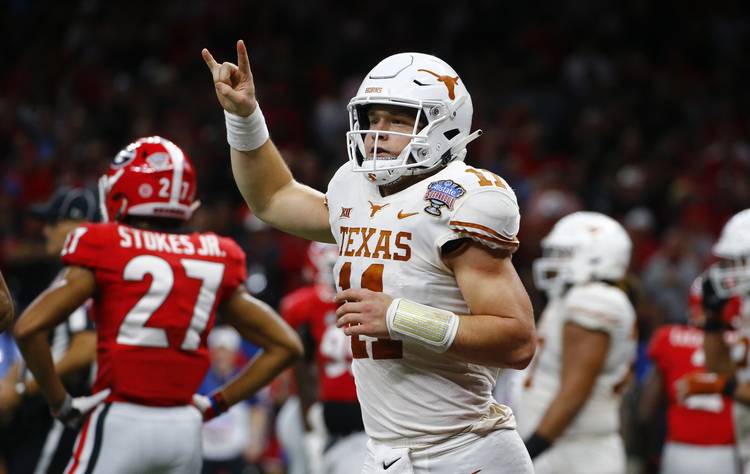 Has this August been extra long or is it just my imagination? Tom Herman probably feels that way, given the state of his football team, so please hurry, Louisiana Tech.

The third-year head coach of the 10th-ranked Longhorns can’t be overly happy insomuch as they failed to achieve the top priority of any preseason football camp.

Get out of preseason with a healthy team.

Texas flunked that category, or maybe we’ll give ’em a D. At least no player suffered a season-ending injury.

That said, the Longhorns limp into the regular season somewhat because they have banged-up running backs, with two of them out for maybe the first month of the season, severely depleting the depth in that room. The starting center was out with a foot injury until this week. The first-string tight end just returned from concussion protocol.

Even Herman said his level of concern was “high” about his running backs at his Monday press conference.

So the lack of perfect health slightly tempers any enthusiasm for a championship season for Texas and strengthens the notion that the Longhorns may be a year away.

Still, the promise is great as are the expectations since a certain bowl victory, but, of course, Georgia didn’t care, right? (If that’s true, it doesn’t speak well for Kirby Smart or his players. Pride, anyone?)

Here are my annual predictions for Texas’ season:

Sam Ehlinger will start every game at quarterback.

Really. But he will barely miss out on a trip to New York City alongside the Heisman Trophy finalists because of the team’s record. He will be hard-pressed to duplicate, much less top, last year’s numbers of 41 total touchdowns, but he will. He’ll wind up with 3,148 passing yards and 28 touchdowns. He will run about the same and with the same reckless abandon that makes him Sam — uh, oh — and produce 14 rushing touchdowns and 595 yards. Please slide, Sam.

His physical, rambunctious style will come with a price, and an injury will cost him parts of two games. Sam the Ram ain’t the best idea.

Backup Casey Thompson will struggle in his first year of action.

But he’ll still throw for 169 yards and two scores and run for 89 yards. He’ll play in four games.

Doesn’t that statistic just make you want to cringe? The program that gave us Earl Campbell, Steve Worster, Ricky Williams and Cedric Benson has no 1,000-yard rusher that many times? Between 1995 and 2005, Texas produced a dozen 1,000-yard rushers, and Vince Young fell 2 yards shy of making that 13. And Williams ran for 990 yards in 1995 or it’d be 14.

Injuries and a lack of proven stars, coupled with average offensive lines since 2008, are the culprit. But freshman Jordan Whittington will become a star and be the leading rusher with a bruising style, stepping off 793 yards and getting into the end zone eight times. Keaontay Ingram, who can be explosive, will battle a knee injury all year but remain healthy enough to share the load with Whittington and top out at 624 yards and seven touchdowns. Those two running backs will make 22 catches for 312 yards between them.

Devin Duvernay and uber-gifted freshman Jake Smith will each run for more than 100 yards on jet sweeps.

The Longhorns will not have a 1,000-yard receiver.

They’re loaded at the position. Collin Johnson is a huge target with great hands and terrific routes, but lacks breakaway speed. He’ll grab 76 balls for 927 yards and nine touchdowns, then get drafted in the third round.

Duvernay will get the ball much more often and better utilized this fall.

He didn’t have a single drop all last season. Playing in the slot, he’ll catch 61 balls for 868 yards and seven touchdowns. He could be the next Marquise Goodwin in the NFL.

Jake Smith will tear it up.

He’ll be everywhere, maybe the next Wes Welker or Julian Edelman at the next level. He’ll remind Longhorns fans of Jordan Shipley, the best receiver in school history. Look for him to get his hands on 42 receptions for 439 yards and four scores.

Duvernay and Smith will each return a kickoff or a punt for a touchdown.

Malcolm Epps will turn in 18 catches for 232 yards and a score. Brennan Eagles will have 13 receptions for 135 yards.

He’ll make 56 catches for 341 yards and five touchdowns. True freshman Jared Wiley, the 6-7 quarterback from Temple, will make his debut and have five receptions for 31 yards.

Left tackle Sam Cosmi will make the biggest splash on the offensive line.

Parker Braun, the grad transfer from Georgia Tech, will not redshirt. Four offensive linemen were on the field for more than 1,000 snaps. Only two will do so this fall.

Oscar Giles will continue to be a stud coach and recruiter.

He’ll get the most out of a raw, inexperienced defensive line even though Malcolm Roach is the only real returning mainstay. Giles has plenty of talent up front, but none of them has truly distinguished himself yet. Collectively, the defense will blitz from all angles and positions and finish with 38 sacks.

Roach will lead the team in quarterback sacks with eight.

He’s this year’s Charles Omenihu. Redshirt freshman Keondre Coburn will explode at nose tackle. He got into three games last year and had two solo tackles but kept his redshirt. He’ll have a huge impact up front. So will Ta’Quon Graham and Moro Ojomo.

Linebacker Joseph Ossai will have his breakout year and lead the team in tackles with 88 stops.

He had eight tackles in the Sugar Bowl and is ready to take his game to the next level.

Texas will have the best secondary in the Big 12 and one of the most athletic and versatile in college football.

Pick a star. Any one of them. I love nickel back B.J. Foster. He’s a physical, hitting machine and will have the hit of the year although we’re not supposed to celebrate those any more. Safety Caden Sterns will top the team with six picks, and Brandon Jones will have four. The team will total 15 interceptions with two run back for touchdowns.

Two Longhorns will get flagged for targeting.

Cameron Dicker will be more accurate after hitting 18 of his 25 field goals.

The sophomore kicker will boot 21 of 26 field goal tries, will make two from beyond 50 yards and will have one game-winner. Don’t forget to mug for the camera, Cameron.

Punter Ryan Bujcevski will be much improved.

He will have one blocked, however.

Others like Coburn, Whittington, Foster and cornerback Jalen Green will make the second team.

Whittington will win league Big 12 freshman of the year.

But Smith will get several votes.

That’s a leap of faith. I’m torn between that and 9-3 out of fear Ehlinger will miss big chunks of a game or two and the running back depth. If Ehlinger misses two entire games or more, all bets are off.

I’ve flipped on my earlier guess about Week Two. I now think the Longhorns will beat LSU because Herman has some of Bob Stoops’ Big-Game moxie and DKR will be rockin’. They will lose to Oklahoma and on the road at Iowa State, but circle those games at TCU and West Virginia. They will see the Sooners in a rematch in Arlington and wind up in the Cotton Bowl against Memphis.

The overall perception is Texas is a stout team capable of winning them all but is probably a year away from truly standing out nationally. As ESPN analyst and former Longhorns linebacker Emanuel Acho told us in our “On Second Thought” podcast, “Texas isn’t back until it’s back to its former self.” And that means consistent, double-digit win seasons.

He’s right because Texas has to sustain last year’s momentum. Then Sam can really say it on any stage he wants.

Golden: The season opener behind us, it’s time to start the Texas-LSU hype machine