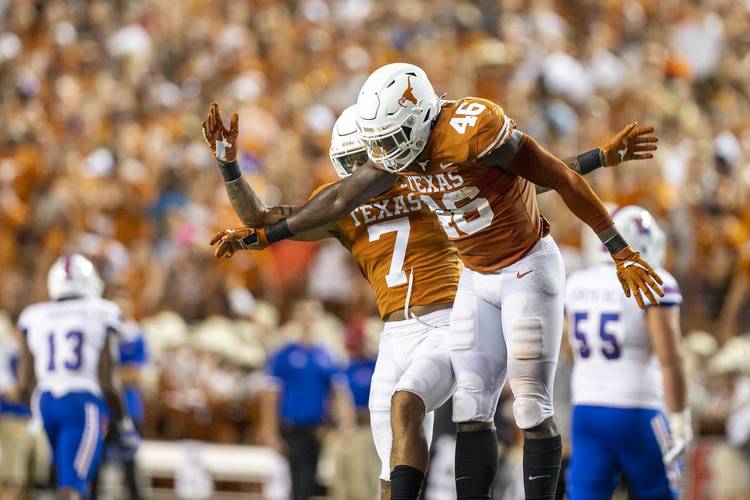 Texas linebacker Joseph Ossai (46) celebrates his Louisiana Tech interception with defensive back Caden Sterns (7) in the first half of an NCAA college football game at Royal-Memorial Stadium, Saturday, Aug. 31, 2019. [Stephen Spillman for Statesman]

The notion that the Texas offense would have to carry the defense for the first month or so of the new season was so prevalent that one might have thought those on the offensive side of the ball would be outfitted in backpacks.

And on this August evening, Sam Ehlinger & Co. did indeed dominate, scoring on six of their first nine possessions to more than carry their weight.

But the defense did plenty of the heavy lifting itself Saturday night.

In fact, it didn’t need carrying whatsoever. Yeah, pitching a shutout for three quarters pretty much speaks for itself.

Louisiana Tech, kept out of the end zone until a pair of touchdowns in the final 14 minutes, finally scored on its ninth series of the game. Otherwise, one of the better Conference USA teams met a brick wall.

In its final report card, the Longhorns defense forced three turnovers, stuffed the visitors’ running game to the tune of 73 yards and had just a single sack by De’Marvion Overshown but so much pressure on Bulldogs quarterback J’Mar Smith that he must have wondered how UT got away with using what seemed like 15 players on defense.

“Those cats were flying around,” an appreciative offensive tackle Sam Cosmi said.

Cats with a dog mentality. They dogged Louisiana Tech all night long and provided Tom Herman a rare blowout in his 18-10 start here.

“We definitely got exposed in some areas with the execution of a couple of coverages,” Tech coach Skip Holtz said. “And their defensive line controlled the line of scrimmage. We were not able to run the ball, and that made a game like this very, very difficult.”

Texas longed to blank a pretty good Bulldogs team that has won 42 games over the last five years, but settled for a convincing 45-14 blowout to give Herman his first Longhorns win in a season opener.

The win sets up an epic showdown with an even better team from the state of Louisiana next Saturday in a game that could go a long way toward determining the CFP bracket if not the fate of Western civilization. It’s likely the biggest intersectional game in Austin since Ohio State showed up in 2006.

Yeah, powerhouse LSU comes calling with its No. 5 ranking and vaunted SEC pedigree and a snarling defense of its own. Those Tigers came close to pinning a big fat zero on their first opponent of the season, but Georgia Southern managed a field goal in a 55-3 Tigers mauling.

Don’t expect an offensive showcase next Saturday at Royal-Memorial Stadium even though LSU’s Joe Burrow and Texas’ Ehlinger combined to throw nine touchdowns Saturday. Burrow’s five came before halftime. We assume he knitted a letterman’s jacket in the second half.

Uh, these defenses will no doubt be burning the midnight oil. Later oil, too.

It’s pretty much a given that Ehlinger is going to put up a bunch of points this season. He showed tremendous chemistry with his receivers right out of the gate, chunking four touchdown passes to three different wideouts. Those were just two shy of the school single-game record of six set by Colt McCoy in 2006.

But Ehlinger sat the entire fourth quarter, content to let the defense do its thing. And it did it well.

Todd Orlando has just three defensive starters back from last year’s 10-4 team — and in truth that unit wasn’t all that good last season, especially in some frantic fourth quarters. We all remember those wild finishes against Oklahoma, Baylor, Texas Tech and, yes, even Kansas.

For one game, the Longhorns looked in command all four quarters.

“We had some big fourth-down stops by our defense. Two of them and three turnovers, so five times our defense got us the ball back,” Herman said before listing linebacker Joseph Ossai, defensive end Malcolm Roach and safety Chris Brown as standouts.

Better yet, playmakers showed up all night long.

Ossai, a budding star, picked up where he left off in his hyperactive Sugar Bowl and had a nifty interception on a ball that starting cornerback Jalen Green deflected. He actually had two picks and returned one 82 yards for a touchdown, but it was negated by a roughing the passer call against Brandon Jones. He hadn’t run one back that far since he returned a fumble against Klein Oak as a high school junior.

“I ran it back high and tight,” he said.

He finished with five solo tackles, one for a loss.

Green also excelled in his first start — joining nose tackle Keondre Coburn and linebacker Ayodele Adeoye in their starting debuts — despite facing the biggest challenge. The sophomore blanketed star wide receiver Adrian Hardy most of the night, holding him to three catches for 38 irrelevant yards although Herman said they often rolled a free safety in his direction.

Brown wowed the audience of 93,418 with a punishing tackle of a Bulldogs receiver Bobby Holly for a fourth-and-1 stop, denying Louisiana Tech a first down on its first possession of the second half. The play turned over the ball to Ehlinger and kept the visitors from mounting any momentum at all.

Orlando played a three-man front much of the game, but sent blitzers from all angles. The ploy threw J’Mar Smith off his game and kept the Bulldogs in check. How much did they blitz?

That’s pretty much Orlando’s methodology and won’t change for LSU. That includes Texas’ unorthodox Cowboy package of eight defensive backs, which Orlando called twice in the first half, resulting in a sack and a Tech penalty.

As safety Brandon Jones said, “I can’t imagine what a quarterback is thinking. We feel pretty confident that we can cover up anything on the back end.”

So much for the defense being a liability.

“I never doubted us once,” Ossai said. “I had 100-percent confidence. We didn’t pay any attention to the media saying we’re the weak link, and we’ve separated ourselves from social media.”

They may be separating themselves from being ordinary as well. It’s a start.

Golden: The season opener behind us, it’s time to start the Texas-LSU hype machine

Bohls: The Big 12 vs. the SEC? As Texas-LSU nears, there really is no argument