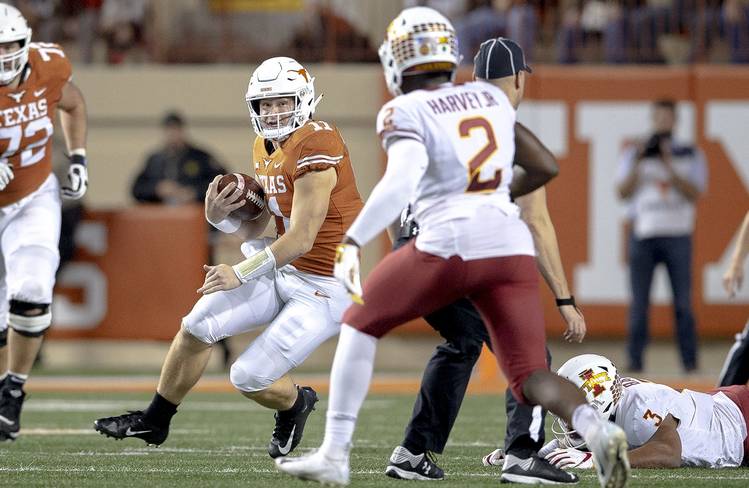 Louisiana Tech did a great job of playing the role of speed bump in Texas’ season opener.

Now the Horns are on to bigger game.

The last time these two conferences met, Bevo XV nearly had bulldog for dinner and the team from Texas put a physical wire-to-wire whupping over the favored Georgia Bulldogs, who went from saying they wanted to make a statement for being dissed by the College Football Playoff selection committee to claiming disinterest in a Sugar Bowl beatdown.

Now here’s another test for Texas, and a season-altering question the Longhorns will soon answer: Can they follow up a program-changer in New Orleans with another national statement at home against the Tigers with the college football world watching.

If they do, then I will co-sign Sam Ehlinger’s announcement that the Texas program is indeed back.

On Saturday night, that other team from Louisiana looked overmatched, overwhelmed and overrun by a Horns team that played very well in all three areas at Royal-Memorial Stadium. Quarterback Ehlinger threw four touchdowns — that’s one for every finger on his right hand but the thumb, Terry Bradshaw — while the defense blanked Louisiana Tech for 47 minutes and Devin Duvernay showed some big-play ability in the return game in addition to catching nine passes.

The 45-14 win was Tom Herman’s first opening night win of his Texas tenure, but all eyes have turned to Week 2, the first big test of the young season.

LSU destroyed Georgia Southern 55-3 in Death Valley behind five first-half touchdown passes from quarterback Joe Burrow. The Tigers did their part to hold up SEC’s claim of being the biggest and baddest conference in college football.

It’s time to rev up the hype machine, and that monolith of sports coverage up in Bristol, Conn. is adding its own fuel to the fire with an ESPN “College GameDay” appearance in Austin for the first time since the 2009 Texas-Texas Tech game. That was the night Jordan Shipley took a punt to the house as the Horns gained a small measure of revenge for the nightmare that was Graham Harrell to Michael Crabtree one season earlier.

It took nine years for Texas to notch double-digit wins again. Now expectations are starting to take on a life of their own, especially with a chance to land a giant blow against SEC royalty.

So, Tom, now that your Horns are 1-0 for the first time since you took the job, please tell us: How much LSU talk went on during the offseason?

“I don’t know that the letters ‘LSU’ ever came out of anybody’s mouth these entire nine months since we left New Orleans,” Herman said.

OK, well then how much LSU game-planning did you install during the offseason?

“Zero,” he said, adding that the graduate assistants and analysts will be handing the coaching staff their breakdown of the Tigers on Sunday.

That’s Texas. Station to station, even though there was some evidence that we may see more big plays this season than we have in awhile.

“Obviously one of the pillars of our program is going 1-0 each week,” safety Brandon Jones said. “So we really pride ourselves in that. In football you never know. Anything can happen. So you really can’t look too far ahead because literally you could lose at any point of time.”

Now about that conference rivalry deal. It may be hyperbole, but the Big 12 should have a healthy dose of momentum going into this showdown since the league of 10 went 9-0 on Friday and Saturday, including nailbiters involving Iowa State and Kansas. Meanwhile, Alabama, LSU and Texas A&M dominated in Week 1, but the SEC was a pedestrian 7-5 in non-conference games. Ole Miss mustered only 10 points in a five-point loss to Memphis. Tennessee somehow lost to Georgia State.

Shoot, even former Big 12 coach Mack Brown took his pound of flesh in his return to the sideline by dancing a jig after his North Carolina Tar Heels topped his former UT defensive coordinator Will Muschamp and South Carolina. Had Auburn not scored with 10 seconds to go against Oregon, the most dominant league in the game would have turned in a 6-6 clunker to open the season.

There’s such a thing as bragging rights but there’s more on the line Saturday. The Texas-LSU winner will make a major move, not only in the rankings, but in the minds the CFP folks who will have a keen eye on this one.

Yes, friends, that hype machine is already starting a steady roll. By Saturday, it will be in full red-line mode in our fair city.

The Bayou Bengals are coming to town.

Bohls: My 2019 Texas predictions? Horns are a year away, but still pretty darn good

Bohls: Texas’ defense was anything but a liability, looks liable to be really good