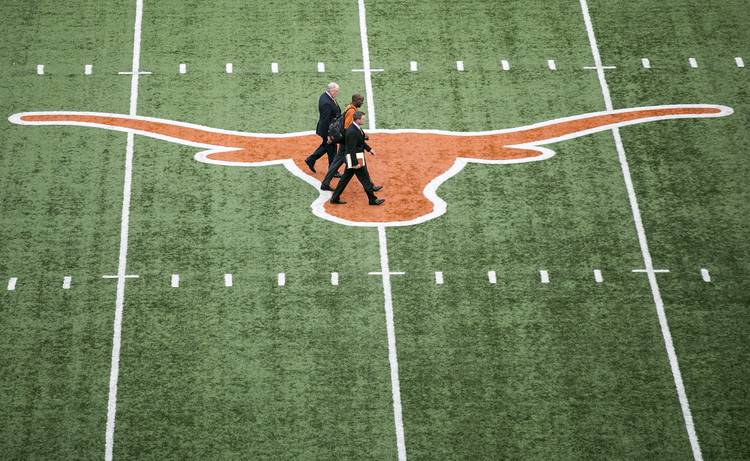 Tom Herman walks to the right of Arthur Johnson, executive senior athletic director for UT, and UT athletic director Mike Perrin as they make their way across the field at Royal-Memorial Stadium before the press conference on Sunday, November 27, 2016. RICARDO B. BRAZZIELL/AMERICAN-STATESMAN

Tom Herman wasn’t pleased to get the question last Saturday night, just a few minutes after he had finally won a season opener at Texas in his third try. Nor was he thrilled with having to address it on Monday, either.

“LSU is a great place, a tremendous football program,” Herman said on the Big 12 conference call. “I’m really fortunate and grateful to be the head coach at Texas. This is my dream job. I’m talking about Texas this week.”

The subject that intrigued others, of course, was Herman’s dalliance with LSU almost three years ago just before he said yes to Texas, his first love. And make no mistake about that. Herman called the tale “water under the bridge,” but those events led to a bridge that connects the Longhorns to their glorious past.

Herman was driven to become head coach of the Longhorns almost since the days he did gofer work as Mack Brown’s graduate assistant in the 1999 and 2000 seasons. In some ways, he’d always been Texas’ head coach in waiting. In desire, if not in title.

That all came to fruition in November 2016 after Charlie Strong was shown the door. A head coach who can’t beat Kansas, a doormat of college football, has no chance to remain at Texas. When one college head coach was told there was the slightest chance Strong could survive, he told me, “Don’t they know they’re the University of freakin’ Texas?”

The narrative is just too juicy to ignore, especially since the most anticipated football game since Ohio State won here in 2006 looms Saturday when No. 6 LSU comes to town.

In that light, here’s a view of those landscape-shaping events that sent two of college football’s proudest programs down paths that quite frankly appear pretty rosy.

Ultimately, it proved to be a win-win situation for both schools.

Texas ended up with a sharp, edgy, confident coach bordering on cocky, with a keen sense of offense and a strong grasp of what’s necessary to take this program to the next level and redirect a brand that was in the dumps after three consecutive losing seasons.

LSU wound up with a gravel-voiced, growling, ever-positive Cajun native, and while his verbiage might be hard to decipher at times, he seems a natural fit in Baton Rouge, as does Herman in Austin at the school that invented arrogance.

So both schools got what they wanted. Or needed.

Their records are remarkably similar. Herman has an 18-10 record at Texas. Coach O is 26-9. Herman has six wins over ranked opponents, Orgeron 11. Neither has reached a CFP foursome. Orgeron inherited a much warmer bed. LSU hasn’t had a single losing season since 1999.

To be truthful, Herman did use LSU. That may sound harsh, but that’s what coaches and athletes do to get what they want. Herman had all the leverage. He was the No. 1 choice of both places. He won big in Houston, and he’s in the process of turning Texas back into the power.

He’s told me often enough he wanted to be in Austin. It was obvious to everyone who really read the handwriting on the wall, if not in the contract full of big numbers that LSU actually put in front of Herman’s face. The drama ratcheted up when a HornsDigest report on the same Friday night that Strong coached his last UT game said Herman was close to taking the LSU job.

Herman wasn’t, but he and Armstrong grew weary of Texas’ slow pace and primed the pump. It was a fait accompli that Strong would be let go after the unspeakable loss to Kansas the week before.

“That brought clarity,” one school official said. “It was not just heartbreaking. It angered everyone.”

UT President Greg Fenves, who once flew with Strong to Tulsa to wrangle an offensive coordinator in a very unpresidential move, desperately wanted Strong to succeed here. But hope died in Lawrence.

If Texas had dallied too long, Herman would have accepted the LSU offer and Texas would have looked elsewhere for its next coach.

Had Strong beaten Kansas and made a bowl game in 2016, maybe Texas could have clung to blind hope and given him more time. But Strong is looking more and more ill-equipped to handle head coaching duties, given his seven-game losing streak at South Florida. Maybe, then, Texas would have ultimately landed retired Ohio State coach Urban Meyer, instead of his former offensive coordinator. Not likely, but college athletics is a strange, unpredictable world.

“We got Urban Meyer Jr.,” a top Texas administrator said of Herman.

Kyle Whittingham at Utah. The Horns would have been lucky to have gotten him.

SMU’s Chad Morris, the pride of Lake Travis and now at Arkansas. Too unproven.

Dabo Swinney? Why in the world would he ever leave Clemson?

Nick Saban? Hey, Texas kicked his tires before and could have landed him, except that athletic director Steve Patterson and then-President Bill Powers didn’t want him.

Mack Brown wasn’t ready to go when he was pushed out the door. A second act in Austin? Improbable.

Bryan Harsin? He would have been high on the list.

“There was no Plan B,” a big-time Texas power broker told me Thursday. “We will never know.”

God only knows whom Texas might have focused on if Herman had gone to LSU because Fenves and athletic director Mike Perrin did no exhaustive search before centering on Herman.

“We’re still Texas. We get our man,” the school official mused. “Hey, Ed Orgeron would have been free.”

Interesting. Maybe Herman and Coach O still would have been on opposite sidelines Saturday, but highly doubtful.

This column endorsed Herman because he seemed a no-brainer choice. He’s got the Longhorns train on the right track. He’s won 11 of his last 14 games with five victories over Top 25 teams and three losses by only 16 total points.

Asked if all the scuttlebutt about Herman going to LSU unnerved him, Perrin said this week, “That never entered into my thinking.”

As for a second choice if Herman had gone Cajun, Perrin said, “I don’t really have an answer for it. Traumatic? It could have been.”

But it never came to that.

Fenves and Perrin met with Herman at the Hampton Inn in Bastrop — “See, Tom met us more than halfway,” the official said — until almost 5 a.m. Saturday, not long after the season-ending loss to TCU. Everything fell into place in the only face-to-face meeting between the Houston coach and the two Texas administrators.

“It was a whirlwind,” Perrin said.

They discussed everything from Herman’s thoughts on special teams to recruiting.

LSU settled for its No. 2 choice in the affable, if rough-edged, Oregon. Houston interviewed Riley, Oklahoma’s genius offensive coordinator and was “blown away,” then-Cougars AD Hunter Yurachek told me. Houston was prepared to offer him the job, but OU athletic director Joe Castiglione beat UH to the punch and instructed Riley not to make any rash decisions without first consulting him. Riley stayed and has kept OU as a college football heavyweight with a pair of playoff berths and Heisman Trophy winners.

Texas did get its man, and it all worked out, save for some hard feelings in Baton Rouge. One team will use Saturday’s game as a launching pad for even better days ahead, but both are well-positioned.

Who knows, maybe these two titans could meet again in New Orleans four months from now to decide even weightier matters.