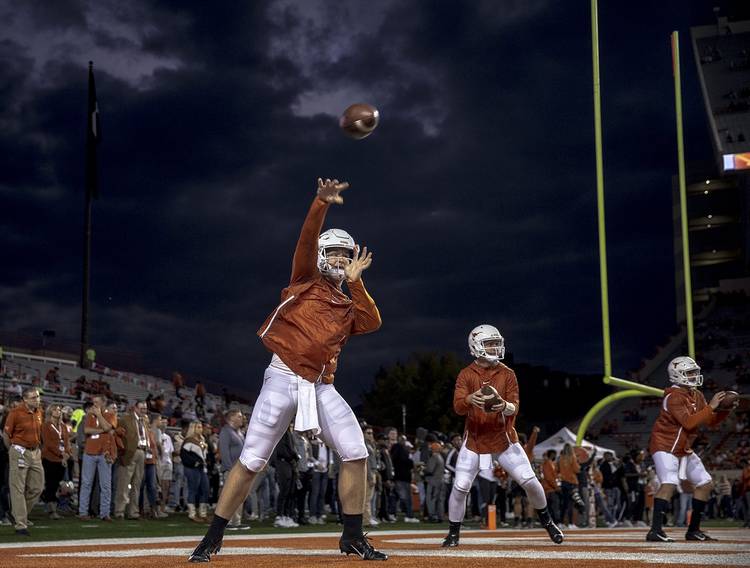 Can he raise the level of a running-depleted offense and deliver the biggest nonconference win of the Tom Herman era not with those tree-trunk thighs but with his arm?

It might come to that before a prime-time national television audience and 90,000-plus very interested spectators Saturday at Royal-Memorial Stadium.

Throw it, Sammy. Forty, fifty times. Chunk that rock as if you will never get another chance to hold a football. Embrace a shootout. It’s Texas’ best chance to win.

LSU is full of confidence and entered the season as a dark horse to win the SEC. The Tigers have put up only one 10-win season since 2013. Coach Ed Orgeron views Ehlinger as the head of the snake, and stopping No. 11 is tantamount to stopping Texas.

When asked Tuesday how he would feel if the game plan called for 50 passes or more, Ehlinger said, “I would love that. That would be a great challenge, but that would be great.”

Wideout Collin Johnson and colleague Devin Duvernay combined to catch 13 passes for 114 yards and a pair of touchdowns in the opener, so I asked Johnson how he felt about the duo getting 20 targets each.

“Man, you know how it goes,” Johnson said. “Receivers want the ball a lot, but at the end of day, I understand my role, and if that’s 20 targets or two targets, that’s all I can control.”

Herman and offensive coordinator Tim Beck have added bit by bit to Ehlinger’s mental playbook over the past couple of years. The junior is a tank of a quarterback, similar to a particular college football legend, LSU head coach Ed Orgeron said.

To that end, I asked Beck if he would be comfortable with Ehlinger putting it up 50 times against the Tigers.

“Whatever we’ve got to do to win,” he said. “You know, that’s one thing we talk about each and every week.”

Sounds like an honest answer, unlike one I received back in 2008 when the then-fifth ranked Horns were preparing for a battle of unbeatens against Oklahoma, a game that was also a shootout of sorts between Heisman candidates Colt McCoy and Sam Bradford.

Texas wasn’t exactly lighting it up in the run game that year, so I pulled offensive coordinator Greg Davis aside for a question.

“Greg, have you thought about just turning Colt loose and throw 40 or 50 times against that secondary and make them stop Jordan (Shipley) and Quan (Cosby) for four quarters?”

Davis shook his head and gave a mild shrug.

“I sure hope it doesn’t come to that,” he said.

McCoy put it up 35 times that Saturday, and while his 277 yards and one touchdown weren’t as bountiful as Bradford’s 387 yards and five scores, they were enough to get the Horns a huge win. McCoy hooked up with Shipley and Cosby to the tune of 20 passes for 234 yards and a touchdown. It was arguably the most gratifying win of his college career.

When Davis saw me in the interview room after the game, he stuck out his hand and said, “Ced, I owe you an apology. I lied to you Monday. It was our plan to throw it all along. The coaches thought you had sneaked into one of our meetings.”

Long story short, Davis understood that Texas had to play to its strengths. He had learned a hard lesson four years earlier when he and Mack Brown devised a woefully conservative game plan against Oklahoma that didn’t take advantage of Vince Young’s immense gifts, a 12-0 loss that might have cost the Horns a chance to play for a national title.

Herman and Beck are well aware that their alpha dogs are the quarterback and wideouts in this offense. Ehlinger has the ability to put up huge numbers in the biggest home game of his career.

Bohls: Texas and Tom Herman — a match made in … Bastrop?