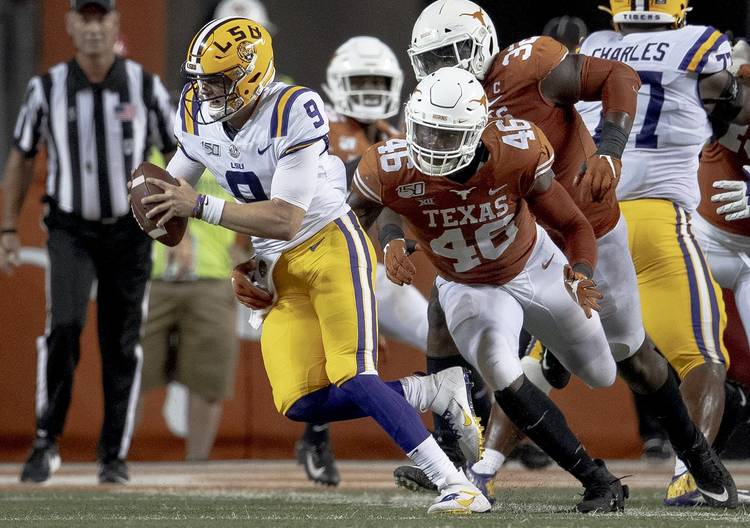 Saturday’s frenzied affair at Royal-Memorial Stadium confirmed more than a few notions that were subject to debate going into this second week of the season.

Texas is a year away.

That’s how close the sixth-ranked Tigers could be from a championship. They are, without question, already at that level.

Don’t be mistaken. The Longhorns (1-1) are very good in their own right and can close the gap between now and December, just not quite as good as LSU. These Tigers play a punishing style of football and stuck a riveting 45-38 loss on Texas in this classic battle of top 10 teams.

And maybe the Longhorns, too, will get there if they can find a nastier defensive front and a pass rush without blitzing, get their young secondary to grow hair and develop a rushing attack that can produce more than 121 yards and a run from a tailback that’s longer than 7 yards. The Tigers offered what Texas safety Brandon Jones called “a shot of reality.”

It really came down to this:

SEC offense, meet a Big 12 defense. LSU liked what it saw, scoring on eight of its 11 possessions and punting just twice.

This was an uphill battle all night long. Almost from the moment running back Keaontay Ingram was all butterfingers in the end zone and dropped an easy touchdown pass and Ehlinger was denied the end zone shortly after, the Tigers grabbed the momentum and never truly gave it up.

Even though the learning-on-the-job Longhorns battled back from a 20-7 hole and on several occasions came within two points, the hardened Tigers would just shrug and drive down the field for yet another score.

Ehlinger, for his part, cranked out another Ehlinger-style game. He threw for a career-high 401 yards and four touchdowns. He didn’t commit a turnover. He passed the ball 47 times. He even caught a pass. And he carried the ball 19 times for 60 yards and a score.

And he was the second-best quarterback on the field.

Which tells you a lot.

Traditionally, LSU plays a ferocious brand of defense with hard-hitting linebackers and speedy defensive backs and runs the ball like crazy. But now it’s found a stud passer as well in Joe Burrow, which hardly seems fair to the rest of college football.

This ain’t the same ol’ LSU and a cloud of passing game distrust.

Burrow, the transfer from Ohio State and the one player that then-Buckeyes offensive coordinator Tom Herman saw something in when no one else did, dissected a shell-shocked Longhorns secondary that might want to stay under the covers Sunday. Shame on Herman for being such a good judge of talent.

Burrow, too, threw for four scores with 471 yards and consistently hit some fantastic receivers on the numbers. The Big 12 has its fair share of great talent at wideout, but Justin Jefferson and Ja’Marr Chase would shine bright in that league.

Herman accurately called Burrow the difference in the game, but it could just as easily be pinned on the leaky Texas defense. That particularly showed up on the crucial third-and-17 when defensive coordinator Todd Orlando curiously called up a max blitz with six rushers, only to see Justin Jefferson streak 61 yards for the game-sealing touchdown catch. The Cowboy package of eight DBs strangely stayed in Orlando’s pocket on that play.

There clearly was some mad respect from both sides. From Coach O and — given what Herman will see on the defensive tape — Coach Oh No.

Ehlinger labeled LSU’s defense “extremely physical” and called its secondary “incredible” for good reason. He came away suitably impressed with All-American safety Grant Delpit and his sure-handed teammates like cornerback Kristian Fulton, who shadowed Texas’ Collin Johnson most of the game and blanked him in the first half.

With a crowd of 98,763 at a fever pitch on a day when ESPN’s “College GameDay” showed up and celebs like Terrell Owens and Mo Bamba hung around the sideline, these two teams put on a showcase worthy of their rankings.

There’ll be no shame in this loss because resilient Texas fought back from a 20-7 hole to trail by two points twice in the final 18 minutes, only to fall victim to the Burrow onslaught.

Longhorn Nation would greatly love to speed along the maturity of its team, which has 11 underclassmen in its starting 22. Texas certainly has made strides. Big ones. Positive ones. Undeniable ones.

But Orgeron’s Tigers have made bigger ones.

They were ranked higher for a reason. They’re further along. They are on track to press Alabama and Georgia for an SEC title.

They could win it all.

Texas is really good, too. Just not as good.

Golden: It’s time to put the DBU talk on the shelf; Texas just needs to get better on the back end