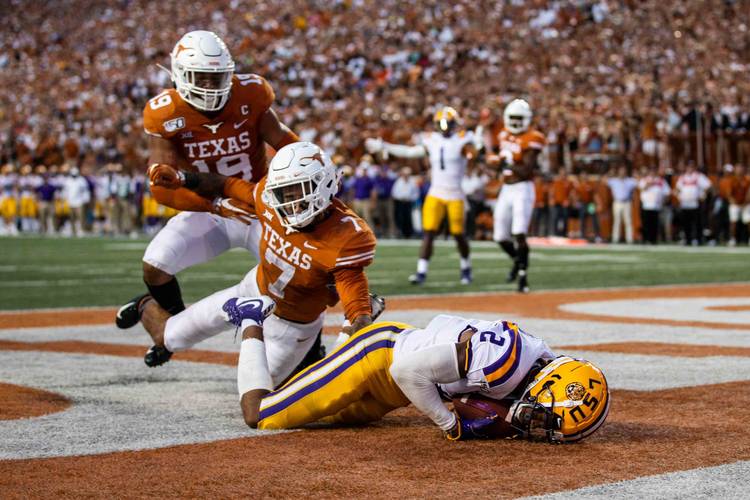 Enough with the DBU talk.

The Texas Longorns have more important matters to handle.

Sixth-ranked LSU exposed some glaring weaknesses in the Texas secondary Saturday night, and it had nothing to do with tradition.

One hour before kickoff, players from each side were jawing at one another on the sideline and several Texas players wearing T-shirts with the words “The Real DBU” were right in the middle of it.

No backing down from either team. Just some friendly pre-game trash talk between top-10 teams, and that’s fine.

The DBU argument is fun for fan bases to toss back forth, but on this night it was the Bayou Bengals walking out with the win while the young Texas defensive backs were sent to the showers on the receiving end of a tough football lesson.

Neither unit did much to remind us of Johnnie Johnson, Jerry Gray, Tommy Casanova or the Honey Badger, but the Tigers showed more on the back end because of their overall edge in experience. As for the Horns, Nathan Vasher, Michael Griffin and Michael Huff all were there at Royal-Memorial Stadium, but those ball-hawking former All-Americans ran out of eligibility a long time ago.

Meanwhile, the youngsters wearing burnt orange ran headlong into one of the best passing offenses in the country. LSU is no longer the type of ground-and-pound offense that typified the SEC earlier in the decade. Passing game coordinator Joe Brady, 29, has turned the Tigers into an up-tempo, pass-heavy attack behind the play of former Ohio State quarterback Joe Burrow, who will get some early Heisman Trophy love after two terrific games to start the season.

Burrow outdueled Sam Ehlinger in a real classic before 98,763 at DKR and millions more on national television who tuned in to see if the Horns were indeed back like Ehlinger proclaimed after the Sugar Bowl win over Georgia or still a year away from real national title contention.

There’s plenty of football left in 2019, but this defense feels like it’s still a year away from being really good. A pass rusher is still needed, someone who can rattle a quarterback’s cage, disturb his rhythm and ease the pressure on the defensive backs.

Burrow was magnificent. He missed on only eight of his 39 attempts and threw for 471 yards and four touchdowns, conjuring up the spirits of former Louisiana legends Terry Bradshaw and Bert Jones. He may be from Ohio, but Burrow has brought a new kind of swagger to the Tigers’ offense.

The guy can spin it. He shrugged off some lava-like pressure from Texas in the first quarter — Joseph Ossai intercepted a pass near the goal line — and settled into a nice groove that proved unshakable by the time the dealing was done. It was obvious that Brady had devised a plan to test Texas’ least experienced cornerbacks, and Burrow was downright merciless, exposing sophomores Jalen Green and Kobe Boyce time and time again.

“Burrow playing 7-on-7 at this point,” tweeted former UT corner Quandre Diggs at one point during the third quarter.

He saved his best for last. With the game hanging in the balance and Texas one more stop from giving Ehlinger a shot at what have been a Cinderella finish, Burrow hit a streaking Justin Jefferson, who outran Texas safety Caden Sterns to the end zone for a 61-yard dagger.

“It was a shot of reality,” safety Brandon Jones said. He understands how much growth must happen for this team to return to special places.

Defensive coordinator Todd Orlando surprised many of us by dialing up a blitz on the that fateful third-and-17 play, a sure sign that he just didn’t trust his secondary to hold its water with the game on the line. Worse yet, the Horns were in their Lightning package of six defensive backs and not the Cowboy package, which employs eight DBs and hence more speed on the field.

“Our whole mantra in this game was to empty the chamber and play to win,” Herman said when asked about the final alignment. “We weren’t going to back away from that.”

To be fair, the Tigers had their share of problems with Ehlinger and his trio of wideouts, but they had scoreboard so the flight back to Baton Rouge felt much shorter than Texas’ walk to the locker room. While Devin Duvernay is starting to play like the best skill player on the team, LSU’s defensive backs made more plays on the back end when it mattered and we’re not even talking about the two touchdown opportunities Texas blew in the first quarter.

Safety Grant Delpit was as good as advertised and his cohorts did just enough to get out of here with a win.

“They were incredible,” Ehlinger said of the LSU secondary. “We knew that going in.”

The corners are talented and will get better, but let’s retire those T-shirts with thinking caps.

Let the legends brag about the tradition while you figure out a way to get better.