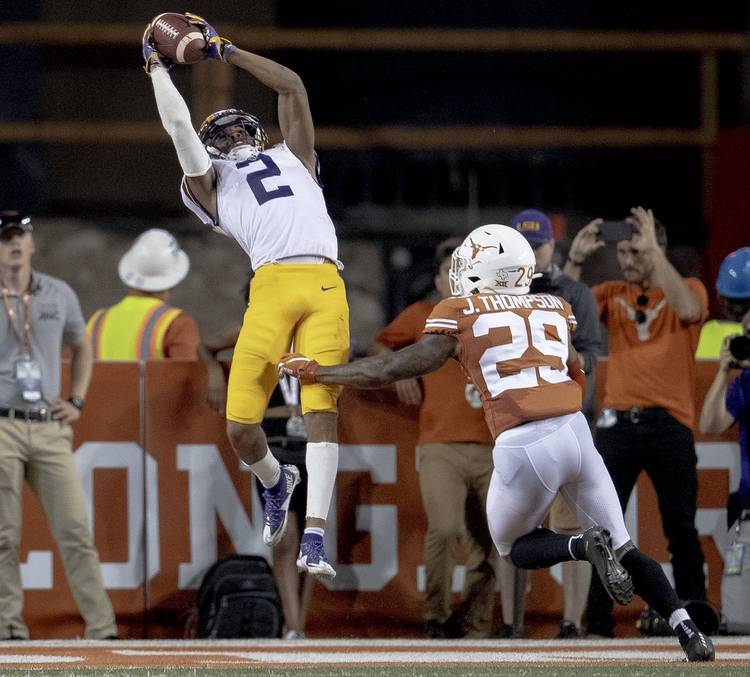 ESPN’s Kirk Herbstreit went out on a limb in late August and predicted Texas would not only win the Big 12 but also reach the College Football Playoff quartet in December.

He’s still kind of out there, hoping it doesn’t break off.

But it’s a really long and unstable limb.

After watching a powerful LSU hold off Texas 45-38 on a national stage at Royal-Memorial Stadium on Saturday night, the voice of college football sees no reason that can’t still happen. Of course, the 1-1 Longhorns would have to run the table their next 10 games, starting with Rice on the road Saturday, maybe beat Oklahoma twice and win the Big 12 championship to punch their first CFP ticket.

And that could be an excessively tall order unless Tom Herman and his staff rapidly improve the secondary, the pass rush from the defensive front and a running game that looked no better than decent.

“Some people were saying after the game that Texas is out of the playoff mix,” Herbstreit told our “On Second Thought” podcast that comes out on Thursday. “I predicted Texas would get in the playoffs. But I ask, what did Texas do to hurt its image after they played LSU on a national stage? I don’t think they did anything to hurt themselves.”

They did in the loss column, however.

But if anything, Texas probably enhanced its image by playing LSU largely on even terms and had a good chance to win, perhaps if Keaontay Ingram had not been butterfingers in the end zone or if the offensive line had created more room for Sam Ehlinger from the LSU 1 and maybe if Collin Johnson had hung onto the ball on the onside kick and given his offense one more crack.

Texas was in it, but LSU was the superior team. And the Tigers would have that head-to-head advantage for any unofficial tie-breaker in the event both are later up for a CFP berth with one loss each.

Herbstreit came away totally impressed with the “very, very different” new-look LSU offense coached by Joe Brady and Steve Ensminger that was throwing the ball on a third-and-17 late in the game while leading with a tremendously improved Joe Burrow. Herbstreit said he never expected to see that type of aggressiveness.

The senior quarterback inserted himself into the Heisman conversation — maybe even as the early favorite, with all due respect to Trevor Lawrence, Tua Tagovailoa and Jalen Hurts — and Herbstreit said Ehlinger did nothing to hurt his standing either.

“It’s like Joe Burrow has a new toy and is throwing the ball all over,” Herbstreit said. “And Sam helped his cause, too.”

The loss certainly wasn’t Ehlinger’s fault, by any stretch of the imagination. The junior has now thrown eight touchdown passes without an interception and looks to be every bit as good, if not better, than last season.

Herbstreit saw two teams that were a physical draw. Did he think the Longhorns were every bit as physical as the Tigers?

“Absolutely,” he said. “They were somewhat of a mirror (image). They look faster on defense, and they look more physical this year.”

He does, however, see the desperate need for a big upgrade in the Texas secondary after Burrow torched it for 471 yards and four touchdowns.

“As much as Todd Orlando likes to be aggressive and come up with negative plays, they have to shore up that secondary,” Herbstreit said. “Those young cornerbacks, that’s the one area they’ve got to get better at. I don’t think Texas wants to be one of those teams that tries to outscore everybody.”

Orlando is stuck between a rocky start and a hard place. He’s working with an extremely talented set of defensive backs but a very green group that is learning on the job. Brandon Jones has looked terrific for the most part, but Caden Sterns has been victimized at times as he was on that third-and-long play that turned into a 61-yard, back-breaking LSU touchdown when he missed the tackle on Justin Jefferson.

Herman declined to say how many missed tackles his team had Saturday. And now nickel back B.J. Foster is out for a couple of weeks with a “significant” hamstring pull to further test that embattled secondary.

Some wonder if Orlando is trying to compensate for the youth by taking necessary risks, especially with so many blitzes. But he lacks impact playmakers up front and may have to take chances with extra rushers. It’s a Catch-22.

“I think Jalen Green will be a superstar down the road,” Herbstreit said of the sophomore cornerback. “Because of their youth, there’s only one way for this defense to go, which is up.”

Golden: It’s time to put the DBU talk on the shelf; Texas just needs to get better on the back end