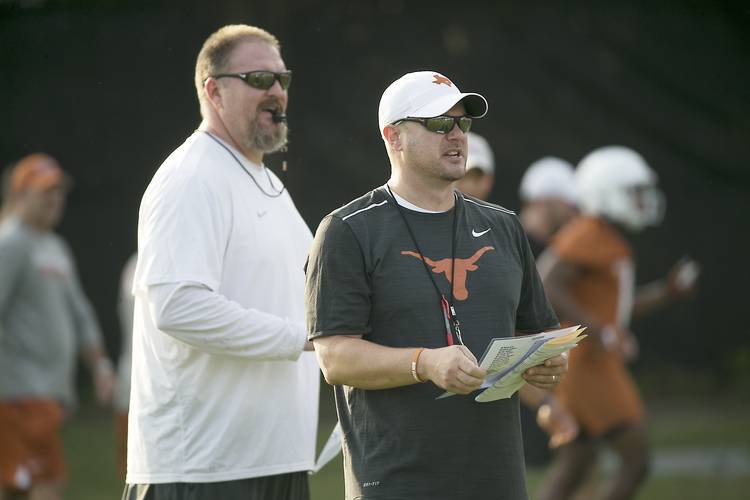 It’s rather murky how Tom Herman’s career would have turned out had Yancy McKnight stayed longer than 10 days in Tulsa.

McKnight was 33 when coach Todd Graham hired him as the Rice strength coach. That 2006 season was rather special based on current standards. The Owls had gone 1-10 the previous year. Going 7-6 and reaching the New Orleans Bowl was a raving success.

Graham bolted for Tulsa after that season, and McKnight went along for the ride. Back in Houston, then-Rice athletic director Chris Del Conte made the rare decision to let athletes give input on the search committee. The overwhelming message? Get McKnight back ASAP.

“He’s a guy that you just respect the hell out of,” former Rice quarterback Chase Clement told the American-Statesman in 2017. “I just feel like there’s nobody in our program that had more respect than Yancy. He was very fair. He just knows how to push you.”

Del Conte, never one to let finances stand in the way, offered McKnight a salary he couldn’t refuse. New Owls coach David Bailiff re-hired the Rice strength coach along with a slew of other new assistants — including Herman, his 31-year-old offensive coordinator from Texas State.

Asked what his tenure at Rice meant to him, Herman said Monday, “That’s where I first found Yancy McKnight, so I think that’s pretty significant.”

During that 2007 season, McKnight worked with Herman, safeties coach Craig Naivar, cornerbacks coach Jason Washington and graduate assistant Derek Warehime. At the time, none of them could even dream of coaching together at Texas more than a decade later.

That same group is headed back to Houston wearing burnt orange this weekend to face Rice (0-2) on the opposing sideline at NRG Stadium.

“It was kind of one of those things, you watch the coordinators and you see them interact with their unit, their players and that side of the ball,” McKnight said this week. The Owls’ offensive coordinator was one to watch.

McKnight knew what he was looking for, too. The Joplin, Mo., native with ZZ Top-like scruff was an All-American offensive lineman at Division II Missouri Southern. McKnight was inducted into the school’s hall of fame in 2013.

“There’s some things that you saw,” McKnight said of Herman, “he’s got some special talents and things like that.”

Herman spent two years at Rice and left for Iowa State in 2009. McKnight followed him to Ames and had a three-hour interview with coach Paul Rhoades.

The Cyclones’ offensive coordinator and strength coach were both pivotal to Iowa State’s monumental 28-21 upset win in Austin in 2010. Like anyone rising in their profession, McKnight had been around long enough to see who were rising stars and who weren’t. McKnight knew Herman was going places.

McKnight truly didn’t care where they ended up. Herman interviewed for the Connecticut job prior to the 2013 season. “He asked me and I was like, ‘Yeah, I’m in,’” McKnight said. “That’s the way I felt about it, to be honest with you.”

Herman wouldn’t get his first head coaching shot until Houston in 2015. McKnight packed up his cold-weather gear in Ames and couldn’t move fast enough.

“A lot of people say why would you leave a Big 12 job to go to Houston or wherever,” McKnight said. “You just know what you know and what your belief is. Seeing the success at Rice, Iowa State and then at Ohio State, with their offensive success there, just had a pretty good hunch that he was going to be a good head guy.”

Most know the rest of the story. McKnight pumped up the Cougars physically, and Herman directed the program to a 22-4 record in two seasons. That catapulted Herman to the Longhorns, and now it’s hard to imagine him doing it without McKnight.

Looking back, McKnight figures it probably took eight weeks of offseason workouts to train the Horns how he wanted them to work in the weight room. Having no bowl game in 2016 and then a coaching change prompted players to take too much time off.

Strength coaches essentially control everything during the offseason. Without McKnight’s firm direction in January and February of 2017, the Horns’ turnaround might have taken longer. Instead, UT snapped a three-year losing streak that fall and won a bowl game.

McKnight pushed the pedal to the metal the next offseason, and Texas went 10-4 in 2018. The season ended with a physical, dominating win over Georgia in the Sugar Bowl.

Herman came into this season raving about UT’s offseason work. “Physically, they look great,” Herman said after the first preseason practice in August. “You can tell they’ve had a good eight-week session with coach McKnight.”

Good luck finding anyone now that will call Texas soft.

Texas rewarded Herman financially, and school officials did the same with McKnight. According to USA Today’s database of college salaries, McKnight is the 10th-highest paid strength coach in the nation with an annual salary of $436,000. Iowa’s Chris Doyle leads the list at $725,000 annually.

McKnight should take pride how none of the Horns had cramping issues last Saturday. Maybe LSU players were faking theirs, maybe not.

This is the program Herman wants. McKnight is the strength coach willing to carry out the coach’s wishes. And to think this might not have happened if McKnight had stayed in Tulsa.

Golden: Expect Texas’ Keaontay Ingram to bounce back after his LSU struggles

Bohls: What does 12th-ranked Texas have to worry about? Let’s remember 1994 …