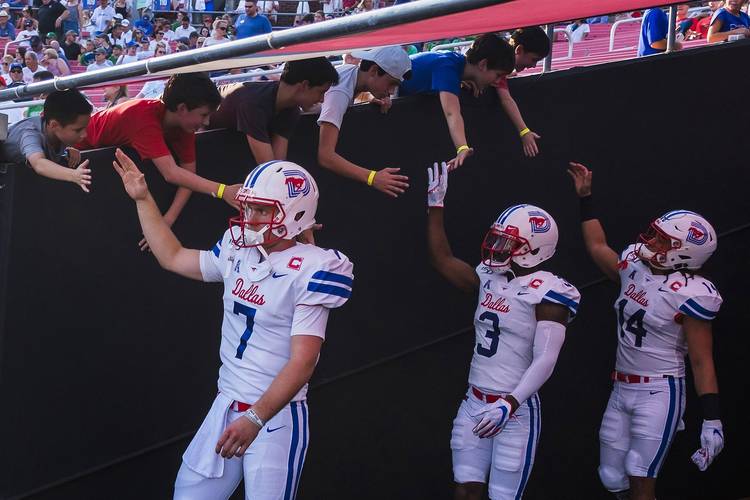 DALLAS — Shane Buechele was far from perfect Saturday night, and that works well if the numbers add up favorably on the scoreboard.

SMU’s graduate transfer quarterback brings confidence, experience and that extra bit of moxie that’s ideal for the position. He made big plays against Texas State. He also made a couple of questionable throws that resulted in turnovers.

All said, the laughs and high-fives dominated the postgame landscape after the Mustangs’ 47-17 win.

“Ugly first half,” Buechele said outside SMU’s locker room with a smile and a shake of the head.

He was Metroplex born and now he’s back in familiar surroundings and feeling great about it. Once upon a time, Buechele was thought to the future of the Texas program and its charismatic head coach Charlie Strong. Things didn’t work out for either guy. Buechele threw for nearly 3,000 yards with 21 touchdowns as a freshman in 2016, but it wasn’t enough to get the Horns to a bowl game or save Strong’s job. Injuries took their toll in 2017 and a freshman by the name of Sam Ehlinger seized the starting job.

Buechele’s transfer to SMU was the right call. The Mustangs and offensive-minded head coach Sonny Dykes are the right fit and the start of the 2019 season has been a feel-good story. SMU is 3-0 for the first time since 1984, one year before his dad Steve played his first game with the Texas Rangers.

These days, the son’s team is alive and well. Buechele, who exchanged greetings with President George W. Bush and First Lady Laura Bush at the pre-game coin toss, sat out the last 10:15 of the blowout but not before connecting on 14 of 18 passes for 219 yards and a pair of touchdowns, the latter coming on a 58-yard connection with Westlake product Kyle Granson.

“We didn’t do a really good job of being patient in the first half,” Dykes said. “I thought Shane forced a couple of throws. And I thought once our offensive line settled in and Shane settled in, we played a lot better in the second half.”

Being three wins away from a second bowl appearance in three seasons isn’t being taken lightly up here, especially since the Ponies lost their last two games of 2018 to miss out out on a chance to play in the AAC title game and a bowl game. But Boo Jr. is calling upon the lessons he learned at his last stop when it comes to the season that lies ahead.

“It’s important for us to just keep going week by week and try to go and get a win,” he said. “It’s big for us a program to be 3-0, but to carry it over from the last place, we like to go 1-0. We want to go 1-0 and win every week and things will take of themselves.

The Bobcats (0-3) presented a tough challenge defensively in the early going. Defensive coordinator Zac Spavital did a good job of mixing coverages and often dropped eight defenders into the secondary while rushing three. It resulted in two first-half interceptions.

“That stuff is tough to go against,” Buechele said. “I forced it a little bit. It’s important for us to do what we do best and take what they give us.”

SMU isn’t exactly a UT transfer pipeline, but things worked out well for Austin preps legend Garrett Gilbert, who succeeded Colt McCoy in 2010 but fizzled as the Longhorns’ starter and transferred to SMU for the 2012 season. He rediscovered his stroke with 6,460 yards and 36 touchdowns over his last two years in Big D. He’s now backing up Baker Mayfield with the Cleveland Browns.

As for Buechele, the promise of playing time was an attractive option in his decision. Plus he was accepted into the business school where he can continue to work on biz management and his dream of becoming a GM of a professional team if the NFL thing doesn’t work out.

For now he’s the manager of an emerging offense that’s miles better than it was this time last season. The Mustangs have a young offensive line that will experience some growing pains, but there are weapons at wideout with James Proche and at running back with Xavier Jones and running back TJ McDaniel, who ran for 159 yards and three touchdowns in his college debut.

Next Saturday’s opponent is a familiar one for Buechele, except that this time he won’t be playing TCU for Big 12 pecking-order status, but for bragging rights in the annual Battle for the Iron Skillet.

It’s early yet, but Buechele and the Mustangs are cooking so far. He’s completing 66 percent of his passes for 871 yards and a nice passing efficiency rating of 151.7.

“We’re thankful to have him,” McDaniel said. “If he wasn’t here, it would be a lot different. It would be a different program.”