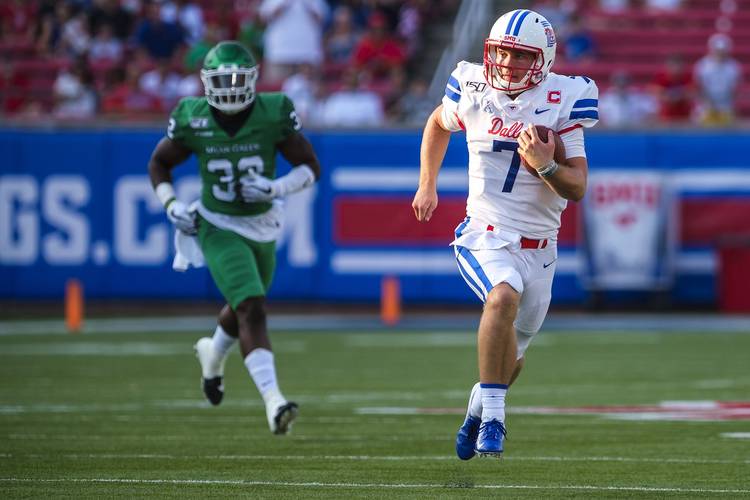 SMU quarterback Shane Buechele (7) runs for a first down against North Texas during the first half at Ford Stadium in Dallas on Saturday, Sept. 7, 2019. SMU won, 49-27. (Smiley N. Pool/Dallas Morning News/TNS)

The corner cashed for the second straight week and we’re now 13-13 since the start of the NFL season. Future bets placed in the inaugural Craven’s Corner are looking fruitful with Ohio State rolling and the Baltimore Ravens impressing. There is still time to place a few future bets, and I suggest looking at LSU in the SEC and Ohio State to win the national championship. Both bets provide tremendous value.

Baylor +3 over Iowa State: This Iowa State team looks nothing like the one many expected to contend for a Big 12 title. The lack of a running game hampers the offense and we’ve seen the Cyclones struggle to score against Northern Iowa and Iowa. Baylor is a pesky team with the ability to put up points, especially at home. I simply don’t see Iowa State blowing out Baylor, so I’ll take the points and home-field advantage.

SMU -7.5 over South Florida: SMU and former Longhorns quarterback Shane Buechele are undefeated and emerging as a true candidate to win the AAC. Buechele faces his former head coach Charlie Strong, and that should provide Buechele with the motivation to carry his team to a big win over South Florida.

Kansas State +4 over Oklahoma State: This is a tough game to pick. Oklahoma State impressed me in its loss to Texas. Quarterback Spencer Sanders is a budding star and Mike Gundy is clearly committed to running the football. I also like this Kansas State squad that matches up well in the trenches against the Cowboys. I’m not sure if Kansas State can win, but it’ll be close.

North Texas -7.5 over Houston: I attended a Conference USA school, so I’m probably more inclined to watch games outside of the Power Five programs than the average fan. North Texas is an offensive giant with quarterback Mason Fine leading the group. Houston is in turmoil with quarterback D’Eriq King deciding to redshirt.

Notre Dame -12.5 over Virginia: I expect this line to reach 14 points by kickoff. Notre Dame is simply a better team than Virginia, even if the Fighting Irish can’t hang with the elite programs in the SEC. Virginia isn’t close to the Georgia program Notre Dame lost to last weekend, and this gives Brian Kelly’s squad a chance to build momentum.

Vikings +2 over Bears: Do you trust Mitch Trubisky? The over/under on this game is currently 38.5, so Vegas doesn’t trust either of these offenses. This is an important game in the NFC North with Green Bay on track. This Vikings team is playing with more confidence and that’s why I’m taking Minnesota.

Bengals +4 over Steelers: This Steelers team is a hot mess. The Bengals aren’t much better, but at least Cincinnati has a starting quarterback in Andy Dalton. Neither team is impressive and I’m not sure why this game is on Monday Night Football; I can’t bet on the Steelers to beat anybody by more than four points.

Giants/Redskins Over 49.5: This line continues to grow as the public remembers that both of these defenses are atrocious. It should be a good week for both offenses, and it could turn into a shootout because the Giants are without running back Saquon Barkley. Giants quarterback Daniel Jones looked solid in his NFL debut and the Redskins offense should be able to attack a poor New York secondary.

Detroit +7 over Chiefs: The Lions aren’t bad. Take away a terrible fourth quarter in the opener against Arizona and Detroit is undefeated. Kansas City is a machine and the team likely to emerge victorious, but I like Detroit to keep it tight and cover, just like the Ravens did in a loss last week against Kansas City. Detroit is at home and hoping to make a statement.

Cowboys +3 over Saints: I hate betting on the Cowboys. I’ll break my own rule this week because the Saints are without Drew Brees. Dak Prescott is looking great and Zeke Elliott is slowly rounding into playing shape. The Saints’ win last week over the Seahawks made this line closer than it should be considering the health status of both teams.

Eyes on Texas: Yes, it was slow at the DKR student gate, but UT students need to chill, bro