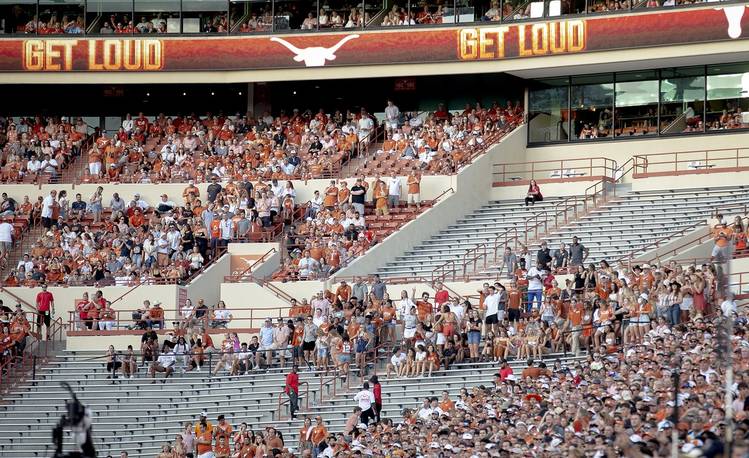 Rows of bleachers remain empty during an NCAA football game between Texas and Oklahoma State on Saturday, Sept. 21, 2019, in Austin, Texas. [NICK WAGNER/AMERICAN-STATESMAN]

College administrators are confounded by the lack of student attendance at football games. At Texas, they can’t get students through the gates fast enough, apparently.

Athletic director Chris Del Conte has landed on the hot seat via hot tweets during the first three home games over student seating, or the perceived lack thereof.

Turns out, Royal-Memorial Stadium has plenty of space for rear ends, and we’ve discovered there’s infinite space on social media to act like one, too.

UT students had legitimate complaints about the slow wristband, ticket and entry process for last Saturday’s game against Oklahoma State. Large sections were empty at kickoff. But things spiraled out of control when students starting blasting the AD on Twitter.

“@_delconte if you’re going to sell me a ticket, give me a seat. Not that hard man. Thousands of students turned away. Class action suit incoming,” one student screamed via his keyboard.

And Del Conte, who just can’t help himself, answered back. Why they don’t confiscate his phone on Saturdays is beyond me at this point. Can someone introduce him to Instagram?

“What I’m getting at is passion. I would rather deal with passion,” Del Conte said in an interview this week. Part of the reason why Texas is Texas, Del Conte believes, is because of passionate constituencies — Texas exes, donors, fans, students, administrators, media, you name it.

“There are two emotions I can deal with: Hate and love,” he said. “Apathy, you have no shot because you can never get it back. No one’s hating. They’re just upset, they’re frustrated, they got a lot of passion.”

Somehow, we’ve gone from fun-loving Bevo Boulevard, Jack Ingram concerts and silent discos to “My dad’s a lawyer,” as one fan tweeted. That was in jest, we think. It prompted Del Conte to respond, “I’m glad your father is a lawyer.”

Another fan tweeted a photo that showed large swaths of empty bleachers in the student section. “This pic was taken well into the first quarter,” the fan tweeted at Del Conte. “The TX student sections are still empty. Passed hundreds of students waiting to get into the game.”

Del Conte couldn’t help but notice the obvious. “I think this was well before kickoff as you can see the band on the field,” he shot back.

Heavens to Bevo, this has spiraled out of control.

Our story begins, as with many things, with good intentions. Del Conte welcomed a first-come, first-served approach to student seating. But with the south end zone expansion beginning this season, the student section that previously wrapped around the southeast corner had to be broken up.

Del Conte said the school has issued 15,000 student tickets, known as the “Big Ticket,” which grants students admission to all UT athletic events.

During the season opener against Louisiana Tech, students crammed sections 29 and 30 close to the field creating something of a fire hazard. When students went to the restroom or concession stands, security wouldn’t let them return to their seat. Thus, students had legitimate gripes.

Then came the top-10 matchup against LSU. Hundreds of students rushed the gate, pushing past security and forcing their way into the stadium. The videos posted on social media looked plain awful, if not outright dangerous.

Asked if some students got into DKR without a ticket, Del Conte said, “For sure, dude. They ran by everybody.”

Texas officials could not let that wild scene happen again. So the athletic department put in a new policy for the Oklahoma State game. Students would have to line up in a queue to get a color-coded wristband that determined where they could sit.

Obviously, those who got in line early got to sit in the best sections. Security directed the late-comers to other sections in different parts of the stadium.

Del Conte said about 3,000 students were let in three hours early when the gates opened. Then there was almost a two-hour lag as students trickled in. When it got close to kickoff, a flood of students rushed in, overwhelming those running the single gate used for entry.

Obviously, the error was not opening more gates, something Del Conte said had been discussed but wasn’t acted on. Basically, stadium operators were too slow to realize the issue and too slow to open a second or third gate, leaving students fuming out on the street armed with Twitter as the game began.

“Some start lining up at 45 minutes before the game. Some got there at the last moment,” Del Conte said. “But we had plenty of seats. We just need to adjust the gates. I’m not going to blame anyone. That’s on me. We had a plan; it’s on me. We’ll get it better the next game. That’s what it is.”

In the days before social media, that’d be the end of the story. Not anymore. With Twitter, what once was meaningless now gets magnified — typically going well beyond the realm of sanity.

“Love all that you do but this is not right,” one angry fan tweeted at Del Conte.

He responded, “All big tickets holders have a seat in the house.”

Del Conte spent time this week in Washington with other college athletic officials. But he addressed the issue in his weekly missive to UT fans. “Any new initiative has growing pains, and that’s what we are going through now,” he wrote.

In an interview with the Statesman, Del Conte said, “Anyone that sends a disrespectful comment, too, it’s also an opportunity to educate. Hey, guys, look, we’re in a process. That’s what happened today with Twitter and social media. Reading tone and being disrespectful is commonplace, and I don’t think it needs to be commonplace, right?

“We’re all Longhorns. We’re all striving for the best,” he added. “And they’re holding me accountable for something that did not go as well as they would like it, too. They don’t understand all the process that goes behind it. But that’s OK. We’ve just got to continue to get better. And I say that to all of us.”

Texas’ next home game is Oct. 19 against Kansas. Kickoff is at 6 p.m. To paraphrase Mack Brown, students should come early, be loud, stay late and hold up their phones to “Don’t Stop Believin.’” By then, temperatures should be in the low 90s, hopefully.

If the athletic director takes more hits than the Jayhawks, something’s gone awry.

“I get the behavior that’s on social media today. It is what it is,” Del Conte said. “You don’t need to be disrespectful and say mean things. My response back? It’s OK, I got it.”

Craven’s Corner: Baylor, SMU are among the smart teams to back in Week 5