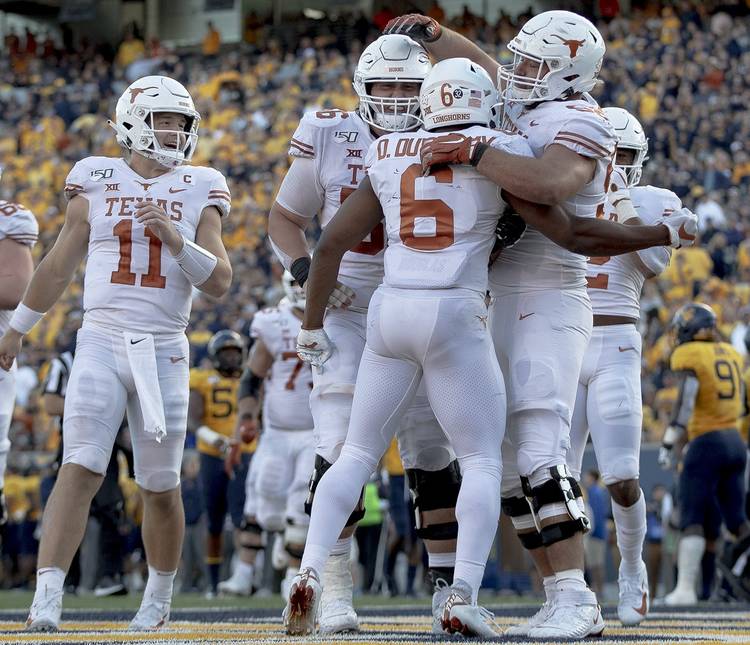 MORGANTOWN, W. Va. — Presumably Texas has something really special saved up for Oklahoma.

It sure did for West Virginia.

The 11th-ranked Longhorns unleashed their bag of tricks for a pair of eye-popping, fourth-quarter touchdowns against the unranked and outmanned but inspired Mountaineers, unveiling a throwback lateral to an offensive tackle and a running play by a wide receiver who was lined up in the backfield. The tricks up Tom Herman’s sleeve helped propel Texas to a 42-31 win and set up a mammoth showdown next Saturday at the Cotton Bowl with sixth-ranked Oklahoma.

Texas (4-1, 2-0 Big 12) may or may not have needed to dust off the gadget plays, but the ploys certainly helped the team ease past a West Virginia team trying to pull off a statement win for first-year head coach Neal Brown before a rowdy bunch of 62,069. Not many places like Morgantown, where the team holds a contest for best facial hair with its BeardCam.

But this proved to be a little hairy for the Longhorns.

There was little doubt Texas needed a little extra boost, and the Longhorns got it by way of four interceptions — two from D’Shawn Jamison — and a stout defense that bailed out a sputtering offense in the fourth quarter.

The trick stuff worked to perfection.

All-America wide receiver candidate Devin Duvernay has stood out as one of the best wideouts  in college football. Now he can add play-making running back to his résumé.

“Duve’s all-everything with what he does for us,” Herman praised. “He’s got elite acceleration.”

Early in the fourth quarter with Texas leading by four points, the senior took a spot next to quarterback Sam Ehlinger, received a handoff around left end, followed a block and stepped out of a would-be tackle en route to a 13-yard touchdown to give Texas a little bit of separation on the scoreboard.

“I just followed the running back and ran it in,” said the soft-spoken Duvernay. “We ran it against Lousiana Tech and I got like 2 yards. This is a play we always have.”

Then, after Jamison’s second pick, Samuel Cosmi got his name in the boxscore with a play called “Moses” named after the lineman’s high school line coach, Todd Moses.

With the new wrinkle inserted into this week’s game plan, the tackle ran it to perfection. The 6-7, 300-pound sophomore cleanly caught a throwback lateral from Ehlinger and ran it in from 12 yards out, colliding with 292-pound Darius Stills at the goal-line for a 35-17 lead and the first touchdown of his career.

“Never scored in high school,” said Cosmi, who said he caught the ball all five times Texas ran the play in practice. “I wish I could have finished a little better, but I just wanted to get in the end zone.”

After the game, he even heard from Moses himself, his old line coach.

So are his fellow offensive linemen jealous?

“Derek (Kerstetter) is,” Cosmi said of the right tackle. “He was very jealous. He said that’s his play next year.”

But the Longhorns are more concerned about this year and what they have in front of them.

Besides the gadget stuff, Herman pretty much emptied his bench. He played backups all over the field, sometimes by design and sometimes by the necessity of dealing with a battered secondary crippled by injuries to two starters.

None of that mattered.

Everything worked. At least after a tense first half in which Texas led just 21-14 and committed all manner of penalties.

Texas was surprisingly pressed by the 10.5-point underdogs, trailing twice in the first half.

But this is a different Longhorns team.

It didn’t flinch for a second.

No, the Longhorns instead flexed their muscles. And used an opportunistic defense, freshman converted running back Roschon Johnson’s first 100-yard game and another typical Ehlinger four-touchdown performance to eventually cruise to the victory.

So now it rolls into the game of the season for a Red River matchup with blood rival Oklahoma.

And what does Herman have saved up?

“We always have a bunch of trick plays,” said a grinning Ehlinger. “Coach comes up with a ton of stuff. Coach Herman and our staff has a lot up their sleeve.”

We presume he’s got the kitchen sink in reserve.