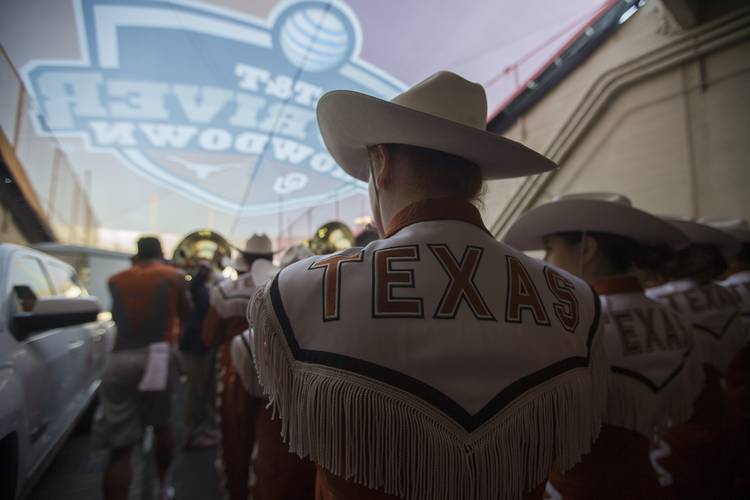 Unlike the early, lopsided betting line, the breakdown of this week’s Texas-Oklahoma game isn’t nearly that one-sided.

But then, the last time Lincoln Riley had a close shave, he was in his bathroom.

The oddsmakers installed the sixth-ranked, unbeaten Sooners as a surprisingly large 10 1/2-point favorite. Maybe it’s not a coincidence that ESPN’s Power Index lists OU at No. 6 and Texas way, way down at 20th.

Advertisement
“We’ll be burning the midnight oil tonight, trying to find a way to score some points and hold them to something reasonable,” Texas coach Tom Herman said.

Just hope the Longhorns staff has stocked up on some excess oil.

That said, some of the critical elements in this showdown suggest the game might be more even than some expect.

The quarterback position is a wash.

Jalen Hurts has developed into the Sooners’ Heisman candidate du jour, or rather, du anni, for all you subscribers to Latin Illustrated. He cannot be stopped. He may not even be able to be slowed. He’s in the same mold as Baker Mayfield and Kyler Murray except he has a national championship ring and they don’t.

Hurts is 31-2 record as a college starter, but is a much better runner than he is a passer. The stats show he’s damn good at both. He’s the only quarterback ranked among the top 25 rushers nationally with 499 yards and an average of 8.75 yards a carry. And he’s sixth in the nation in passing with 305 yards a game and a 75.2 completion percentage. Texas cannot let him loose in the open field.

But Texas’ Sam Ehlinger has to be a legitimate Heisman contender as well, tucked somewhere behind Hurts, Joe Burrow, Tua Tagovailoa and Jonathan Taylor. Ehlinger, with a hard G and even harder shoulder that he leads with on his scrambles, is James Street with a better spiral. He’s thrown 17 touchdown passes with just two picks and ranks 13th in the country with 290 yards a game.

Both quarterbacks have intangibles out the wazzu. They have a Tim Tebow ferocity about them.

The defense is a wash. Neither’s is all that hot.

Oklahoma’s, under new defensive boss Alex Grinch borrowed from Ohio State, is much better than last year, but that’s not saying all that much. The Sooners are vastly improved at linebacker and cornerback but can still be burned over the middle.

Texas’, under blitz king himself Todd Orlando, is mildly better but totally beat up in the secondary. It thinks pass rush is a suggestion.

The receivers are a push. Well, maybe.

Yes, CeeDee Lamb is the elite of the elite and a bona fide All-America candidate. He may end up as one of OU’s best ever. Shockingly, he only has 18 catches all year, but he’s averaging 24 yards a catch. Charleston Rambo, his sidekick, averages 27.4 yards. And look out for tight end Grant Calcaterra, who had a terrific touchdown catch against Texas in the Big 12 title game but only has five grabs this year. Guess they’re saving him.

The Longhorns have the best receiver in the nation that the nation just don’t know yet. Senior Devin Duvernay is that good. He catches everything but flak. He’s a tough bird. And he’s faster than your monthly bills.

Jake Smith, Duvernay’s backup at slot receiver, is the early favorite for Big 12 freshman of the year with four touchdowns. Brennan Eagles has emerged as the deep threat. And now senior Collin Johnson is set to return after an absence of three games because of an angry hamstring. Come to think of it, give OU the edge.

However, Texas has several clear advantages although secondary may not be one of them, given the fact starting cornerback Jalen Green and safety Caden Sterns are both out with injuries. OU is average at safety and nickel back and vulnerable over the middle, but it’s stepped up its game at cornerback and linebacker.

The Longhorns are the underdog, and underdogs are always more dangerous than the fat and happy favorites. Besides, OU won the last meeting in Arlington for the Big 12 championship, thanks to a certain corner blitz that Ehlinger still hasn’t seen coming.

Texas has a much better offensive line. That’s not entirely due to Herb Hand, who it says here is Tom Herman’s best assistant. The starting five has graded out entirely as champions almost every game.

And heck if Sam Cosmi hasn’t thrown his name into the mix as emergency running back after hauling in a lateral from Ehlinger cleanly and rumbling in for a game-sealing touchdown to beat West Virginia last Saturday. That’s athleticism, folks.

Oklahoma broke in four — count ‘em, four — new offensive line starters, most of whom are starting now in the NFL. And now there are reports the two starting tackles are injured and could miss the game. If that holds true, it could be a huge benefit for Texas, which has clamped down on the run but hasn’t been all that effective at rushing the quarterback without help from blitzers.

The Longhorns have the best linebacker on the field in Joseph Ossai, who is a menace for opponents, but Sooners Kenneth Murray and Ronnie Perkins are shining at linebacker and up front.

The Longhorns have the best kicker in — wink, wink — sophomore Cameron Dicker, who had the game-winning kick to beat OU last October. Redshirt freshman Gabe Brkic has made all three of his field goals for OU, but this is all new to him.

The Longhorns have had the more taxing schedule, meaning they’re more accustomed to facing adversity. The Sooners haven’t played any team the caliber of an LSU or probably even an Oklahoma State.

“We’ve been in a couple of big games already,” Herman said.

This one will qualify as such, too.