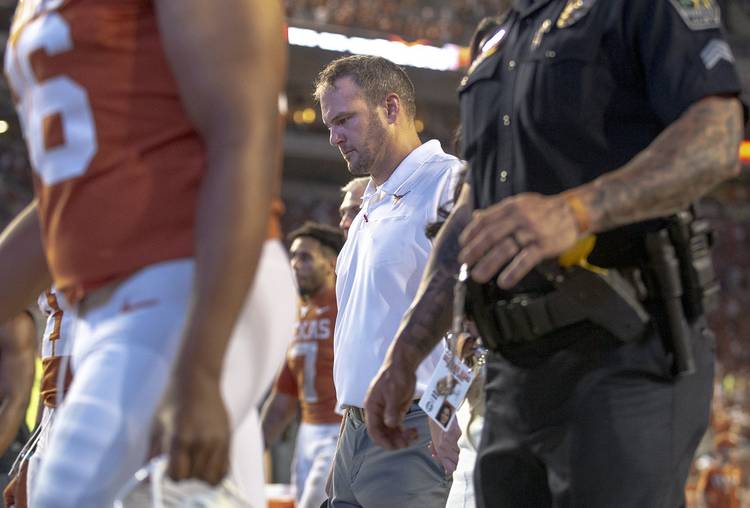 “The sun came up,” Tom Herman insisted in his introductory remarks Monday afternoon.

Technically, it did and the world didn’t spin off its axis, a devastating loss to Oklahoma notwithstanding.

The world didn’t stop, but Texas’ shot at a College Football Playoff berth did. In falling by the misleading margin of 34-27, the Longhorns fell short again.

The third-year Longhorns head coach did his best job of being Mr. Sunshine after arguably the gloomiest loss of his tenure if only because of the stakes. It’s a big setback.

Sure, offer up your Maryland disasters — both of them — and the heart-breaking loss at home to West Virginia. Even the humbling defeats by Oklahoma State in Herman’s first two years. The narrow loss to LSU was an electric game, but oh so painful. Seems the Tigers were bent out of shape about air conditioning or something.

This one, however, hurt to the core because many thought Texas was Oklahoma’s equal, at the minimum.

This time, falling to blood rival OU in the fashion Texas lost is numbing and a bit disturbing.

This time Texas looked outmatched and overwhelmed. And even Herman admitted to being “out-physicaled,” the most stinging indictment a coach can admit.

Up until Saturday, the Longhorns had proven their worth. They had positioned themselves for a legitimate run at their first Final Four. They’d whipped the Sooners last October, were poised to repeat that victory in Arlington until a certain corner blitz, and then walloped a Georgia team in a Sugar Bowl that apparently the SEC doesn’t care about.

Now Texas had dropped both its games against Top 10 competition this year.

Not that it was, Sam Ehlinger’s pronouncement in New Orleans aside. Being back constitutes multiple double-digit win seasons. Being back means winning at least one Big 12 championship. Being back doesn’t register until you beat teams besides Louisiana Tech and Rice.

All hope is not lost. Texas (4-2, 2-1 Big 12) is a good team properly ranked at 15th in the AP Poll. However, the lopsided nature of Saturday’s game suggests Texas just isn’t elite yet. It’s one thing to crow about the quality losses to OU and LSU — a pair of unbeaten teams that are 12-0 — but if you don’t beat them, you might as well be Texas A&M bragging about being in the SEC. It loses a lot of its meaning if you’re not really a factor.

It’s one thing to play OU and LSU close — it was close on the Cotton Bowl scoreboard, though not in viewers’ minds — but that only measures how far away you are.

Herman has constantly proclaimed that Texas will win with defense. Texas, in large measure, has won for the last year-and-a-half in spite of its defense. The Longhorns are ranked 112th in total defense nationally. They’re tied for 75th in scoring defense.

Asked about all the missed tackles against the Sooners, Herman said, “They were glaring.”

What’s really troublesome has been the inadequacies of the defense, even with a glut of injuries in the secondary, as well as recurring flubs on special teams with dropped punts and Devin Duvernay’s poor decisions on kickoff returns in the Cotton Bowl.

The lapses defensively could draw into question the merits of Todd Orlando as defensive coordinator. Where did the hot commodity go? What’s happened to the coach in more demand than Snoop Dogg at basketball exhibitions.

“Everything is fixable,” Herman said.

The list of things needing fixing go on and on. Tackling. Getting more separation from the receivers. Developing a consistent running game. Admitting Roschon Johnson is the best tailback. Finding a pass rush.

“We got our hands on (Jalen Hurts) quite a bit,” Herman said. “But we didn’t get him down. I’m not sure the concern is at a Defcon 5 level yet.”

Kansas, this week’s opponent, should help that process along.

But no one wants to hear Longhorns saying their goals are still intact. They’re not. If they are, that means their main goal was to win the conference, and the standards around here have drastically changed.

Winning a national championship should always be the goal in Austin. Has it become a distant light?

Texas isn’t paying Herman $5.4 million a year to try to win the Big 12. But that would be a healthy start since the Longhorns haven’t done that since 2009 and have won just three Big 12 titles in the 23-year history of the league. That’s a dry spell.

But at least the sun came up.