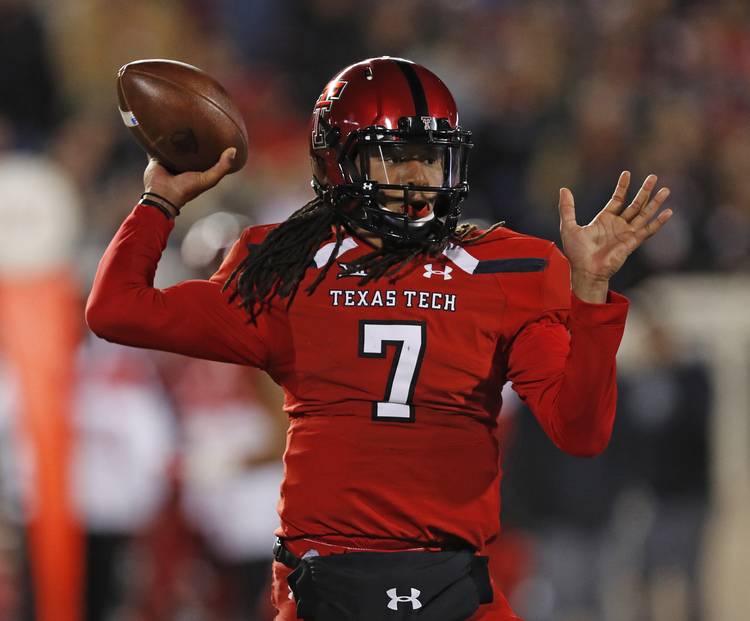 Texas Tech's Jett Duffey (7) passes the ball during the first half of an NCAA college football game against Texas, Saturday, Nov. 10, 2018, in Lubbock, Texas. (Brad Tollefson/Avalanche-Journal)

A 4-6 record last week puts us at 26-29-1 since the NFL season started seven weeks ago. Not great, but we’re also not mortgaging our future with losses. A few bad beats and injuries marred the last edition of Craven’s Corner. That should even out over the season. Our futures bets placed in the initial column all look good halfway through the season, so that’s a positive.

Oklahoma State -3.5 over Baylor: We’ve used the Bears to win recently as the program is under a resurgence under head coach Matt Rhule. The undefeated record comes to an end this weekend with a trip to Stillwater. Oklahoma State received an open week following a disappointing loss to the same Texas Tech team that lost in overtime at Baylor last week. The running game of Oklahoma State helps the Cowboys cover.

Florida -6 over South Carolina: The Gators lost at LSU. South Carolina won its biggest games in years with an upset against Georgia. That leads me to believe that South Carolina is due for a letdown game following such a high against the Bulldogs. LSU is a national championship contender and Florida hung with the Tigers for three quarters. Give me the Gators to provide a reality check to South Carolina.

Texas Tech +7 over Iowa State: The Red Raiders look like a different team with quarterback Jett Duffey leading the charge. The defense is playing inspired and Texas Tech nearly toppled Baylor in overtime on the road. Iowa State is figuring it out and should win this game, but I’ll take this version of Texas Tech to keep it within a score at home.

Memphis -4 over Tulane: Memphis is my pick to win the AAC. The Tigers dropped a heartbreaker on the road against Temple. Memphis needs this game to remain in the race. Tulane does sport the best defense in the conference, but I’ll take the bounce-back factor for Memphis in a home game.

Philadelphia +3 over Dallas: Someone has to win the NFC East and these two teams are the only ones capable. Both lost road games last week. The Eagles fell to the Vikings while the Cowboys were embarrassed by the Jets. Dallas looks like a team that gave up on its head coach and Jerry World rarely offers much of a home-field advantage. I trust Philadelphia’s offense more than Dallas’, even on the road.

Los Angeles Rams -3 over Atlanta: The best medicine for a struggling NFL offense is a game against Atlanta’s defense. The Rams need this game while the Falcons are nearly out of playoff contention with half of the season remaining.

Kansas City -3 over Denver: This line is heavily influenced by recent results and the fact that Denver is at home. The Broncos are on a two-game winning streak with victories over the Chargers and the Titans. That doesn’t do much for me. Neither does the recent slump of Kansas City. The Chiefs wake up for this divisional contest and Patrick Mahomes makes a statement.

Houston +1 over Indianapolis: This is a huge game in the AFC South with Houston rolling after a victory at Kansas City. The Texans need another strong performance on the road to beat the Colts and take a stranglehold on the division. This line is only one point because Indianapolis is at home and coming off a bye week. Give me Houston’s momentum over Indianapolis’ rest.

Jacksonville -4 over Cincinnati: The Bengals are awful. Teams tend to play better following the exit of distraction. The Jaguars unloaded disgruntled star Jalen Ramsey this week, and I expect them to rally against the Bengals. This line started at -3 early in the week and could grow toward six by kickoff.

Miami/Buffalo Under 40.5: The Dolphins can’t score. Buffalo’s defense is the strength of the team. Get in on this line as soon as possible because it’ll come down throughout the week. The Bills offense is fine with running the ball and keeping the score low.

Eyes on Texas: Missed tackles are nothing new around here, but Todd Orlando’s got to stop it