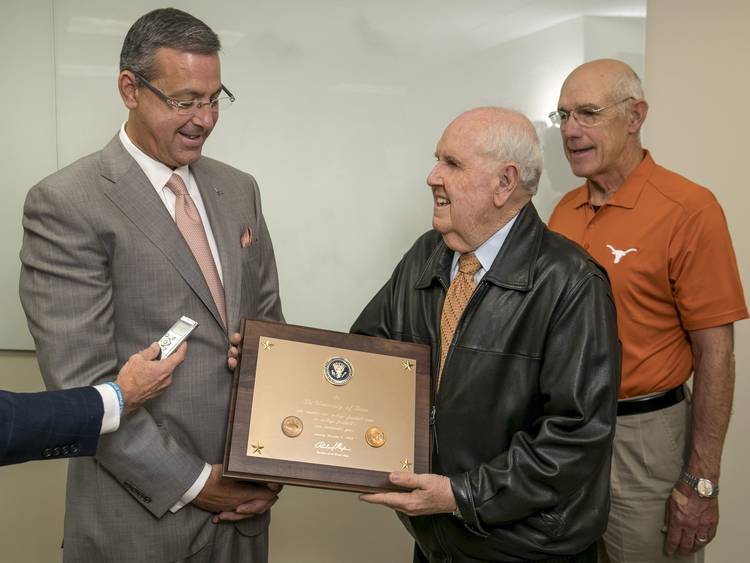 In a recreation of a famous 1969 photo, former UT media relations director Bill Little (center) presents a replica plaque to UT athletic director Chris Del Conte (left) while Ted Koy, co-captain of the 1969 team, watches at Del Contes office on Thursday Oct. 17, 2019. The original plaque, which has been lost, was presented to UT head coach Darrell Royal by President Richard M. Nixon after the Longhorns beat Arkansas in 1969, has been missing for 50 years. [JAY JANNER/AMERICAN-STATESMAN]

To this day, no one knows where it is.

But anyone who is a college football fan knows its roots.

Moments after Texas had beaten Arkansas in the Game of the Century in December 1969, there in the din of a delirious, cramped visitors locker room bursting with joy, was President Richard Nixon presenting Darrell Royal and his Longhorns an official plaque commemorating their milestone victory and proclaiming them the No. 1 team in college football.

An iconic black-and-white photograph chronicled the special scene with Nixon and Royal and Texas quarterback James Street and tailback Ted Koy looking on, a historic sports moment in time that capped the dramatic 100th season of college football.

There may have been no bigger football fan than the late 37th president, the deep-jowled, swarthy-looking politician who was a backup lineman for his Whittier College team and was so enamored with football that he sent recommended plays to NFL coaches like George Allen and Don Shula and once considered Vince Lombardi as his vice-presidential running mate.

In the hubbub of the presentation in 1969, Nixon eventually retrieved the plaque from Royal, who had taken it and tucked it between his arm and side. Nixon said he would take it back with him to Washington and have it officially engraved with “Texas Longhorns” burnished on it for all time.

And then it was gone forever.

Lost in the dustbin of time, a treasured relic from those heady days of the 1960s, when Texas flexed its muscles as the powerhouse of the decade with two national championships and a third on the way in 1970, had disappeared. That 1969 team will be recognized during Saturday’s Kansas-Texas game, but on Friday night they will be feted in the new $17.1 million north end zone Longhorn Hall of Fame.

“This is awesome,” said Texas athletic director Chris Del Conte, who was only 1 in 1969 living with his parents in Cuernavaca, south of Mexico City. He didn’t see his first  college football game until 1983. “Darrell Royal was the ultimate gunslinger. You talk about cojones. The national championship. The president was there. You can’t make this stuff up.”

The ’69 team will tour the glitzy, high-tech hall among the 392 championship trophies, including the one earned by Bruce Berque’s men’s tennis squad last summer, the school’s 55th national champion in all sports.

But that original Nixon plaque will not be there.

Little was there that cold, dank wintry day in Fayetteville, Ark., when the two teams battled  before a transfixed crowd at Razorback Stadium that included the world’s foremost Christian evangelist, Billy Graham, and the first sitting president to watch a Longhorns game in person along with Congressman and future president George H.W. Bush in attendance as well.

Little was a 27-year-old assistant sports information director for Texas, serving under the legendary Jones Ramsey, and he had been assigned to gather quotes in the victorious locker room. Everyone in the room was physically and emotionally spent, Koy remembers.

“It was one of those surreal atmospheres,” said Koy, who stood behind Royal as one of the three team captains.”The Secret Service guys were back off in the corners. It was just an unbelievable thing.”

Koy said he distinctly remembers Nixon telling Royal that he’d return the plaque to him.

The epic game had been one for the ages. Originally the brainchild of television commentator and football historian Beano Cook, the game was moved  to the final week of the regular season in December, and Texas and Arkansas obliged. They entered that week ranked No. 1 and No. 2.

The Razorbacks controlled the game for the duration of the first three quarters, but the momentum tilted in Texas’ favor when Street ran forever on a touchdown scramble to start the fourth quarter and bring the Longhorns to within a single score of the hosts.

Then, on the most famous fourth-down play in school history up until one of similar magnitude involving the No. 1 and 2 teams in the country in the Rose Bowl some 36 years later, Street found tight end Randy Peschel behind two Arkansas defensive backs with the most perfect pass of his career. Koy ran for 11 yards on the next play to set up Jim Bertelsen’s winning 2-yard score for a heart-pounding 15-14 win.

The victory came against a backdrop of war protesters on a surrounding hillside clamoring for Nixon to end the Vietnam War, but the president stood oblivious to the noisy distraction and even said during a halftime interview to beware a spirited Texas comeback before game’s end. He’d gone to the losing locker room as well that afternoon and told the sullen Razorbacks that he understood losing, but coming back as well.

Contrary to popular belief, Nixon did not proclaim Texas the national champion that day, but the No. 1 team in the land. It might be a small point of distinction, but the gist of the matter was lost on the Penn State faithful. The Nittany Lions, also unbeaten, bristled at Nixon’s crowning of the Longhorns and made their displeasure well-known.

Years later, a still irate Joe Paterno would add his strident voice in opposition to Nixon’s grandstanding and clamor that, “I don’t know how the president can claim to know so much about football and so little about Watergate.”

Cotton Speyrer, the standout receiver on that Texas team, had kidded that “some Penn State fan had probably gotten the plaque and thrown it into Lake Erie.”

The plaque supposedly made its way back to the Texas camp, but no one can confirm that. It’s not in the Longhorn archives. Edith Royal, Darrell’s widow, has no idea of its whereabouts but swore Nixon never sent it back to Austin. Only Fred Akers, who is suffering from Alzheimer’s, remains as the sole living survivor of Royal’s coaching staff. Little searched high and low for it and thought he once saw it hanging on the wall in the coaches’ lounge in the Gregory Gym complex.

The shiny piece of sports memorabilia, however, was gone.

So Little did the next best thing.

With a celebration of the 50th anniversary of that 1969 team looming, he and his wife, Kim Scofield, dined with Del Conte and wife Robin over salmon and short ribs at the Headliners Club downtown on the Thursday night before this season’s Texas-Rice game. The topic came up, and Little came up with his brainstorm.

“What if we recreated it?” he posed.

Del Conte quickly signed off on the plan.

“And it went straight to the Nixon Library and a picture of the plaque,” Little said. “I about jumped out of my chair.”

Little was on the case. He contacted the White House about gaining access to the presidential seal to apply to the reproduction. He talked to director of marketing Joe Lopez at the Nixon Library in Yorba Linda, Calif., about authenticating and copying Nixon’s signature because Nixon signed very few documents. Lopez recited the exact verbiage on the plaque, and Little got Longhorn Trophies, a local company founded in 1969 of all years, to mirror the same font and same spacing.

“It’s a cool, little tidbit of history,” said Dean Mire, the 26-year-old sales associate at Longhorn Trophies. “I’ve always been a bit of a history buff.”

Mire said they went with a dark walnut instead of the less-available oak on the official plaque. They received a digital version of Nixon’s autograph. Little found the college football centennial medallions — the two sides of the coin are flanked on the lower portion of the plaque — on eBay and another website.

From the wording to the step edges, Longhorn Trophies made it a perfect match.

Little said the task wouldn’t have been possible without Del Conte giving birth to the Hall of Fame, but Del Conte gives all the credit to Little and his wife. “It’s been a labor of love with Bill and Kim.”

On Friday, at least 56 members of the 1969 team will gather to tour the new Hall of Fame. They’ll have a reception, they’ll share stories and sit down for a dinner. And then Del Conte will unveil the plaque before it takes its final resting place.

“Until Chris created the Hall of Fame, the plaque had no place to go,” Little said. “Now we can give it a home.”

Eyes on Texas: Missed tackles are nothing new around here, but Todd Orlando’s got to stop it

Golden: Texas got the win, but the Longhorns’ defense remains comatose