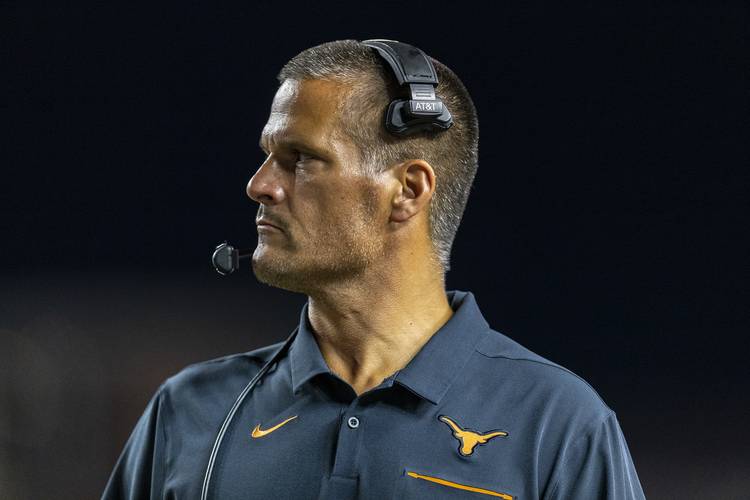 Texas defensive coordinator Todd Orlando watches as his squad competes against Louisiana Tech in the second half of an NCAA college football game at Royal-Memorial Stadium, Saturday, Aug. 31, 2019. [Stephen Spillman for Statesman]

Todd Orlando won’t share his secrets, but it’s clear he’s been losing weight since the season began. The 1993 Wisconsin roster listed the 6-foot linebacker at 225 pounds. He’s bound to be well under that now.

On Wednesday, Orlando met reporters with multi-day scruff poking out from that Pittsburgh steel-tough jawline of his. If this guy is sleeping at night, it can’t be much.

Stress does funny things to us all. Orlando doesn’t need anyone to remind him what happened last week against Oklahoma. He’s had a front-row seat all six games this season. The Texas defensive coordinator knows his unit ranks 10th out of 10 in Big 12 total defense and is putting up historically bad numbers. The Longhorns are ranked 126th nationally in pass defense, too.

But what bothers him the most? It’s all those missed tackles.

Maybe replacing those eight defensive starters from last season isn’t as easy as most inside Moncrief thought.

“Well, that’s what majority of everybody saw (against OU),” Orlando said. “You know, the missed tackles were glaring, so we went out on Tuesday and we addressed it. We did a whole bunch of live work and our kids responded really well to it.”

From the sound of it, Orlando and his defensive coaches literally had the Horns practicing step by step — from wrapping up the ball carrier, driving your feet and getting him to the ground.

Probably would’ve helped if one of those four Horns did that to OU’s CeeDee Lamb at the Texas 20. He still got loose for a 51-yard touchdown. Or like when Lamb was near the sideline and squirted free for a 27-yard score.

“There’s technical things, angle things,” Orlando said. “But things like that, like any fundamental or technique, we’re going to rep the heck out of it until it gets resolved.”

Some TV talking heads were crowing last weekend that “Texas leads the nation in missed tackles.” How does anyone really know that? I’d like to see the rankings of missed tackles for all 130 FBS teams.

On this topic, Texas is an easy target. Nobody misses tackles quite like the Longhorns.

“Very disappointed,” Manny Diaz said after BYU rang up 550 rushing yards on a night of spectacularly bad tackling in 2013. “Our level of execution was not where it needed to be tonight.” Mack Brown ran Diaz out shortly thereafter.

In 2015, Charlie Strong said, “We missed so many tackles.” And that was after a win over Rice!

Strong said he told defensive coordinator Vance Bedford, “I guarantee you, we have 20 missed tackles or more. And sacks, God almighty, what did we miss, about 10 sacks?”

Texas fans may not know X’s and O’s, but they know missed tackles. They can accurately diagnosis this problem.

“You watch the film and you critique it to them, it’s all technical,” Orlando said. “There’s not a kid out in the field that can’t do that.”

Orlando said it’s all about how you “launch” at the ball carrier. “You throw a little bit too early and you got a dynamic guy that’s strong in his lower half, and he’s going to break right through that stuff,” he said.

Orlando acknowledged this is a fundamental taught during the offseason. Not too much the Horns can do about it at the moment, not with at least six games left and an already thin depth chart due to injuries.

“It’s not like this is the first day we’re teaching tackle,” Orlando said. “You come into spring ball, you do it all the time. You come into fall camp, you go through it. But then when that’s live bullets and you’re going against some good guys, it better be exact and that’s what we want. We weren’t exact.”

No. 15 Texas (4-2, 2-1 Big 12) will probably come out gangbusters Saturday against Kansas (2-4, 0-3). Kansas running back Pooka Williams sure will. One of the Big 12’s more dynamic runners averages 89 yards per game. If he played for Oklahoma or Texas, he’d probably be a national household name, not just known in the heartland.

Williams and Khalil Herbert have combined for 829 yards and three touchdowns this season. The rushing duo is one of the few bright spots for the Jayhawks. Kansas’ defensive totals are near the bottom of the Big 12, hovering above or near UT’s.

Anyone getting themselves revved up about Orlando or his job status should probably take a breath, though.

Considering the opponents still remaining on Texas’ schedule, the Horns’ defensive numbers should come down a bit in the coming weeks, although it’s probably too late to alter the major averages at this point. Orlando’s salary was bumped up to $1.7 million last season, making him UT’s highest paid assistant by a mile. He also got an extension, too, pushing his contract out to March 2021. Thus, Orlando’s deal is guaranteed for at least one more season.

Make no mistake, Orlando and his defensive assistants have landed in a stew. Injuries to multiple starters in the secondary haven’t helped. Some young linebackers are coming on, though, like Joseph Ossai, Ayodele Adeoye and Juwan Mitchell.

“To me, it’s always been when we’ve gotten in these spots is to put your hands up and figuratively fight and work harder,” Orlando said.

Let’s not kid anyone. The defensive line needs help. That unit has produced only two sacks all season. Texas as a team hasn’t had a sack in two games. Defensive end Malcolm Roach will be suspended the first half against Kansas for a targeting ejection against OU.

“There is some stuff schematically that we can do,” Orlando said.

Orlando said he “wasn’t necessarily fired up” about the rushing lanes that were left open against OU and how quarterback Jalen Hurts escaped out the back door at times. Orlando said there are things UT can do to fix that. Hurts had 131 rushing yards and averaged 7.7 yards every time he tucked and ran.

A little bit of scheme and a little bit of coaching with maybe a dash of get the guy on the ground. If not, can someone make sure Orlando gets a hot meal and a shave?