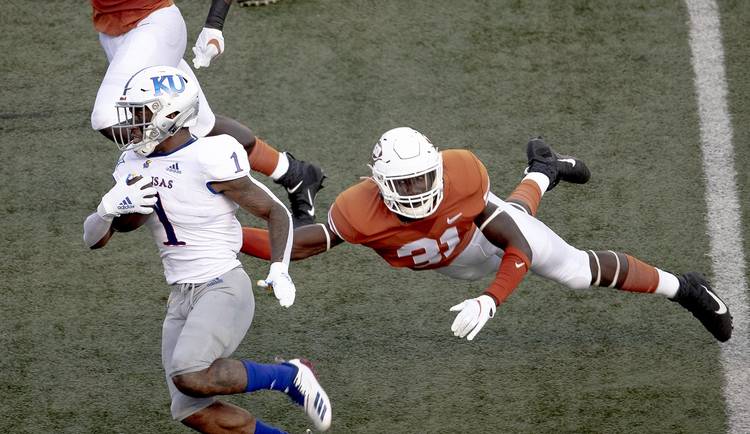 It was a barn-burner for long-suffering Kansas fans.

But if you live in Austin, this was closer to a dumpster fire.

The Texas Longhorns are beaten up on defense, turnover prone and still one of the friendliest pass rushes in all of college football.

They’re also no longer the second best team in the Big 12. Not after this near-disaster.

Give Baylor that honor for now. The Bears have earned it. They’re  7-0 and tied atop the Big 12 with top dog Oklahoma after spanking Oklahoma State in Stillwater.

As for the Horns, they won  —  and it’s a much better result than the one that befell No. 6 Wisconsin at Illinois — but their defensive coordinator may have to change his name to “To Orlano”  if this keeps up because there was little to no D being played as 97,137 groaned and gasped after every missed tackle, after every blitz that came up short and after each throw that found its way into the waiting arms of a Kansas receiver.

Somehow the Longhorns survived, thanks to some clutch play from Sam Ehlinger, Collin Johnson and Cameron Dicker, who coolly split the uprights on the final play to give the home team a 50-48 win over a 2-5 Kansas crew that actually lost a game, 12-7,  to Coastal Carolina at home in Week 2.

On nights like Saturday, it pays to have an experienced hand behind center, but Sam — on a night where he threw for 399 yards and four touchdowns — was spotty at times, throwing a gift interception deep in his own territory when a long drive would have preserved a 31-24 lead early in the fourth. Freshman receiver Jake Smith also cost the Horns a chance to make things easier when he coughed up the ball with the Horns up seven at the 6:19 mark.

It’s a season-long problem that’s not going away.  Todd Orlando’s defense has given up 2,040 yards in the last four games. Opponents are averaging just under seven yards per play. The Horns have allowed five players to top 100 yards rushing in the last four games and the pass rush has been comatose with just one sack in the last 121 pass attempts against West Virginia, Oklahoma and Kansas.

Those are  historically horrible numbers and no amount of spin will change that reality, not from the head coach or a defensive coordinator who makes $1.7 million a year but isn’t required to answer questions regarding his unit’s performance until four days after the game.

“There’s not a guy that’s ever played defense that has made 100 percent of his tackles,” UT coach Tom Herman said. “It doesn’t happen. It’s got to be proper technique and if the guy makes you miss, he makes you miss but at least you’ve held him off long enough for the cavalry to arrive, and we’ve got to make sure that our guys are fresh and healthy enough to be running to the football.”

Kansas quarterback Carter Stanley, who played a lead role in sticking the penultimate nail in Charlie Strong’s coaching coffin in Lawrence three years ago, nearly derailed Texas’ Big 12 title game hopes with a stellar performance with an able assist from running back Pooka Williams. The two accounted for 500 of Kansas’ 569 yards and all six touchdowns as Texas defenders flailed and floundered after giving up an early 14-0 lead.

If anything, it’s a referendum on the depths to which the worst defense in program history — yep, worse than Charlie’s in 2015 and 2016 — has fallen amid the myriad injuries and just some really bad football from some of the regulars.

Guys like  Malcolm Roach and Joseph Ossai —  tough-minded players whose blocked kicks turned out to be pivotal  —  will have to stay after the newcomers during these tough times because the Horns just announced themselves as beatable to any team remaining on the schedule.

“You gotta keep going, man,” Ossai said. “Keep working hard. The next guys up are pretty tough guys. They may be young, but you just gotta work with them, get in the room, getting as much film as  you can and do what you can to get a win, to scrap out a win. That’s what we’re doing.”

Texas improved to 5-2 overall and 3-1 in conference. That’s not a cause for panic, but somewhere down the line, this defense has to step up.

Up next, TCU. The Horned Frogs aren’t playing the kind of ball that had Cowtown citizens wanting to erect statues of coach Gary Patterson and quarterback Andy Dalton after they beat J.J. Watt’s Wisconsin Badgers in the Rose Bowl back in the day, but they will be licking their chops after a 24-17 loss to Kansas State.

Well, the same Kansas team that nearly toppled Texas got worked in Fort Worth, 51-14.