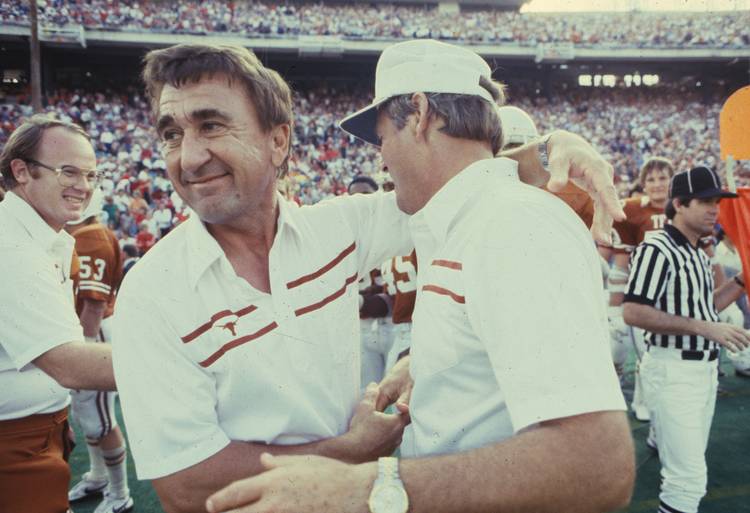 You just listened. If you were smart.

He was the most spellbinding storyteller since Ernest Hemingway, and he could spin a tale like few others.

When the loquacious former Texas football coach/recruiting coordinator and first Westlake head football coach in that school’s history would tell a story, you became immersed in it. Didn’t matter if you’d heard it before. The excitable manner in which he told it — always with his ear-splitting grin and hearty chuckle from the belly — you relished hearing it again.

Quite simply, it was impossible not to like Ken Dabbs.

He may have been the most gregarious, upbeat and helpful person this writer has ever had the pleasure of coming across. Many were the times I’d interrupt Ken and his lovely bride, Marguerite, over their cheese enchiladas and puffy tacos at Tres Amigos because if you saw him, you were compelled to have a conversation with him.

He was always that sociable.

One of his three sons, Bryan, indicated that may have partly been by design.

“He knew that by telling stories to people, they would feel connected to the program,” Bryan said. “And if he was telling them stories, they weren’t being Monday morning quarterbacks.”

That’s one thing Ken Dabbs wasn’t. There was no fair-weather in the former football coach.

Fiercely loyal. Totally accommodating. Friendly to all. He would be at ease whether he was grabbing a Dan’s cheeseburger on the east side with Darrell Royal, Mack Brown, Bill Little and Eddie Joseph or in a living room with the momma and dad of a five-star quarterback. He’s what we call a people person. He knew no other way.

He grew up in Freer in dusty South Texas where you didn’t lock your house door and you wouldn’t think of passing by someone on Main Street without saying hello. It was there that Dabbs the quarterback met Marguerite the drum major. Love at first Friday night, if you will. In Freer, you knew everybody and everybody knew you.

In that respect, working as a recruiting coordinator was the perfect job for Ken Dabbs, who is a huge if under-appreciated figure in Longhorns history.

Dabbs knew every nook and cranny of the state, every Dairy Queen and every football field. Everyone knew him as “Coach,” right up until he died of cancer last Wednesday at age 84.

The native of Ranger, Texas, would have celebrated his 85th birthday on Friday, the same day he will be remembered in a celebration of a life well lived at Westlake Hills Presbyterian Church.

“He made a difference in people’s lives,” said former UT sports information director Bill Little, who knew Dabbs since Royal hired him out of Westlake in 1973. “He changed the direction of a lot of players who might have gone the other way. He always did for other people, and he never wanted the acclaim. Ken Dabbs didn’t care about that. He just wanted to help kids.”

Steve Massey, a former defensive lineman who was part of Royal’s last recruiting class, said after graduation Dabbs introduced him to Texas alums in Midland to help start his career in the oil business.

“We were friends for a long time,” Massey said. “I don’t know a single human being like him. I remember how genuine he was with everybody. He was the nicest of the nicest.”

Dabbs related to people, young or old, black or white, Longhorn or Aggie. In fact, he connected so easily that it was a huge reason — maybe the main reason — that Earl Campbell became a Longhorns great and also a reason why other black football players like Ricky Williams and Vince Young eventually followed suit.

It was Dabbs who recruited Campbell out of the rose fields of Tyler, once staying 17 consecutive days in Room 164 in a Ramada Inn there to secure his signature, and Campbell, with his signal that it was acceptable to go play for Royal, then recruited a new generation of Longhorns black athletes.

“I think he stayed more than 100 nights at that Ramada Inn,” Campbell said this week.

Asked if he would have come to Texas if there were no Ken Dabbs, Campbell said, “I don’t believe so. I didn’t know nobody like I knew Ken Dabbs. Ken Dabbs was the reason I went there.”

He said Dabbs is the main reason Texas landed other black stars like Kenneth Sims and Alfred Jackson and Jerry Gray and Tony Degrate.

“I first thought he was an average guy,” Campell said. “But Ken Dabbs was the daddy that passed away when I was in the fifth grade. All the coaches were knocking on Ann Campbell’s door — Barry Switzer, all of them. But there was one guy that was always there, no matter what. And that’s Ken Dabbs. Now Darrell Royal and Fred Akers got all the glory, but the guy who knew all those people like me and Sims and Jackson was Ken Dabbs.”

And the two of them formed a lasting relationship that remained until last week. Campbell still talks about how Dabbs knew the names of each and every one of Ann’s 11 children. He still talks about Dabbs being there recently when his brother, Steven Campbell, had open heart surgery.

Had Royal listened to Dabbs, Texas would have had its first black player in the early 1960s when many of the state’s best athletes ignored lily-white, segregated UT and left for racially blind Northern schools like Michigan State and Notre Dame. Instead, Julius Whittier became Texas’ first black letterman in 1970.

Dabbs had started his coaching career at Sweeny as an assistant, and in the fall of 1966 an extremely talented receiver named Elmo Wright approached him about going to Texas. Dabbs has told the story for years but hadn’t consented to seeing the words in print until he was interviewed by author Asher Price for his recently released book, “Earl Campbell: Yards After Contact.”

Dabbs told Price that he telephoned Royal to alert him to the talents of this rare player. Wright visited the Texas campus, but Royal would later call Dabbs back and say, “He’ll have the opportunity to make it somewhere. He’s the real deal, grades and everything. But unfortunately, at this stage of the game, we’re not ready to take that step.”

Houston was, and Wright took a lot of fancy steps there and later for the Kansas City Chiefs. Interestingly enough, his first game as a Cougar was at Memorial Stadium in Austin, where the fourth-ranked Longhorns struggled to leave the stadium with a 20-20 tie.

Bryan Dabbs said Royal told his father that he’d have to cross that racial barrier with multiple recruits and Texas, because of either regental resistance or booster opposition, just wasn’t ready.

“Coach Royal told my dad that ‘If I had listened to you in 1966, I wouldn’t be in the mess I’m in now,’“ Bryan said. “My dad didn’t care about what someone’s color was. You could be as green as Gumby and he’d love you just the same.”

That was Ken Dabbs, and a whole lot of us loved Ken Dabbs right back.