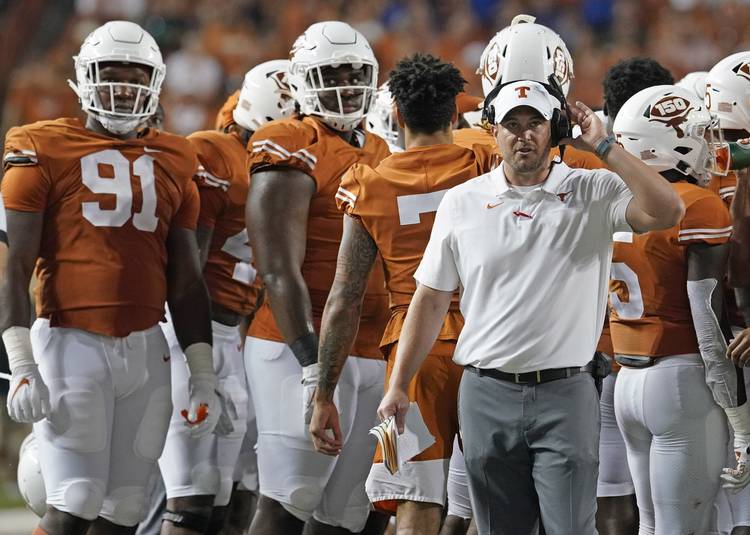 It’ll be a very merry Christmas around Tom Herman’s house this year, provided the Longhorns keep it between the guard rails from now until then.

Herman is scheduled to receive a $1-million bonus if he’s still Texas’s coach on Dec. 25. If that’s not the case, it’ll be one incredible story.

Now, this isn’t new news. Herman’s stay bonus was included in the original contract signed upon his arrival in November 2016. It’s only interesting now because that line item sort of jumps off the screen in USA Today’s updated college football coaching contract database for 2019. The newspaper blasts out all those pesky open records requests and digs through tax records so us local ink-stained wretches don’t have to.

This year’s listing reveals that Herman ranks seventh nationally in pay this season. His total package is worth $6.75 million this year, which includes the $1-million stay bonus due on Dec. 25.

If former UT athletic director DeLoss Dodds was still running the place, he’d probably give Herman a raise, if you can believe it. Dodds always thought Texas head coaches should rank among the top five salaries in their chosen sport. The average salary of the top five coaches in 2019 is about $8 million.

Whether you agree with that is something else entirely.

Clemson’s Dabo Swinney leads the list at $9.3 million for this year while Alabama’s Nick Saban has to settle for $8.86 million. Michigan’s Jim Harbaugh can buy all new khakis with that $7.5 million. Texas A&M’s Jimbo Fisher can spend all night at the Dixie Chicken with his $7.5 million. Georgia’s Kirby Smart can get someone else to trim the hedges with $6.87 million.

“We try to teach our guys (to) use football to create the opportunities, take advantage of the platform and the brand and the marketing you have available to you,” Swinney famously said in 2014. “But as far as paying players, professionalizing college athletics, that’s where you lose me. I’ll go do something else, because there’s enough entitlement in this world as it is.”

In both contracts, the school gets reimbursed their premium payments from the death benefit, and the payoff to those coaches’ families would be far greater.

As UT contracts go, Herman’s contract is fairly straightforward . Some of Herman’s money is paid directly to a business entity the coach controls, but that’s not unprecedented. His buyout at the moment is just north of $20 million.

Texas gave him a two-year extension in May that pushes his contract to 2023. It was a reward for a breakout season in 2018 capped by a Sugar Bowl win.

“The message we want to send to our head coach, to the players on the team, to the recruits and Longhorn Nation is that we’re committed to Tom Herman as the head coach of Longhorn football,” UT President Gregory L. Fenves told the Statesman in May.

What’s interesting is that Fenves and athletic director Chris De Conte want to back up a Brink’s truck and pay Herman a fortune. They’d gladly do it, too, if the Horns won the Big 12 or reached the College Football Playoff.

“You think we wouldn’t do that,” one high-ranking UT official told me in May when Herman got his extension. “We know how to work with the regents.”

If the Longhorns ever get to the CFP under Herman, expect Texas to tear up his contract and start all over — at much higher prices.

Speaking of contracts, Stadium scratched the open records itch and gathered up all the men’s basketball coaching contracts they could get. That’s got some interesting information, too. Texas’ Shaka Smart checks in at 15th nationally at $3.3 million. That’s tied with another basketball coach at a football school: Oklahoma’s Lon Kruger.

Stadium calculated that Smart is still owed $13.8 million for the final four years of his deal. The Statesman measured it at $12.9 million last spring, and that number drops down another $3 million-plus after this season. The money is guaranteed, by the way.

Smart and Kruger are clipping coupons compared to their counterparts. Duke’s Mike Krzyzewski leads the list at $8.89 million, according to information obtained by 247Sports from the private institution. Kentucky’s John Calipari is second at $8 million.

Kansas’ Bill Self checking in fifth ($4.48 million) isn’t a surprise. Texas Tech’s Chris Beard is now sixth, getting $4.2 million this season after a contract negotiation designed to keep the Texas ex away from the Longhorns.

Oh, Tech fixed the language just right. Beard’s buyout is $6 million this season if he accepts another job at “another NCAA school in Texas or in the Big 12.” The Red Raiders will let him off easier if Beard goes to the NBA, another non-Big 12 school or basically anyone who doesn’t wear burnt orange.

Think these guys make too much money? You’ll get no argument from Del Conte, who has to deal with their agents.

“We operate in a business based on emotions,” Del Conte told me in New York just before Texas’ NIT championship victory.

I’m emotional now, too. Should’ve picked up a whistle instead of a notepad all those years ago.