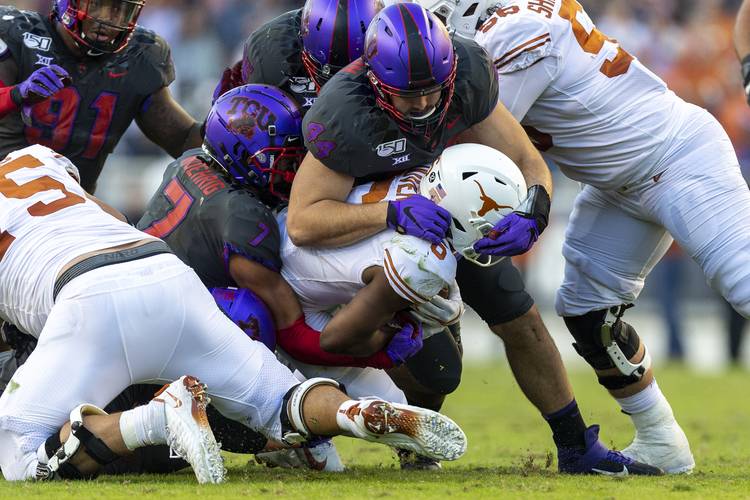 Texas wide receiver Devin Duvernay (6) is tackled by TCU safety Trevon Moehrig (7) and defensive end Colt Ellison (44) in the second half of an NCAA college football game in Fort Worth, Saturday, Oct., 26, 2019. [Stephen Spillman for Statesman]

FORT WORTH — Surely there’s a good explanation for this mess of a season. But given the soaring expectations for this Texas team after the statement win in the Sugar Bowl, there’s plenty of blame to be spread around at this jaw-dropping, under-achieving juncture.

And that leaves a few harsh possibilities that must be considered:

Head coach Tom Herman, at 22-13 at Texas, isn’t as good as advertised.

Defensive coordinator Todd Orlando, under fire all year for a leaky defense, may need a change of address.

Sam Ehlinger is human after all.

The offensive line is overrated.

The defense is cooked.

Something’s clearly broken. And it appears highly improbable that it will get fixed by season’s end.

Texas, still ranked as one of the best 15 teams in the entire nation although it was charitably ranked 21st on this writer’s Associated Press ballot, wasn’t even the best team on the field at Amon G. Carter Stadium. And the other team, TCU, was a pedestrian 3-3 before Saturday and barely had a pulse.

That was before the once promising Longhorns season went up in smoke.

Texas fell for the second time in three weeks because Ehlinger wasn’t Superman once. Heck, he wasn’t even Max Duggan, the nimble rookie quarterback who scalded the Longhorns for 273 yards and two touchdowns. Ehlinger threw for 321 yards and a pair of scores, but was rushed into a career-high four interceptions that crippled his team’s prospects.

Texas lost because it still has no consistent pass rush and looks lost in the secondary where Horned Frogs receivers regularly got open deep time and again in the second half.

The Longhorns failed to produce any points on possessions that began at the TCU 26 and the 42 and realized only a field goal after a first down at the TCU 6 when it totally forgot running the ball was legal. Roschon Johnson was nowhere to be seen until the final quarter, carrying just five times for 9 yards, and Keaontay Ingram never had a gain longer than the 17 yards he had on the first play of the game.

“You’re not going to win a game on the road turning over the ball four times and not scoring touchdowns in the red zone,” said Herman, who was very conservative early when he kicked a field goal on fourth-and-1 at the 3. “This (TCU unit) is by far the best defense in our conference. I thought we played fairly well in the first half. But we didn’t put our guys in great position in the second half. Our defense was put into too bad a position and wore down.”

Herman must pick up the pieces. He said he still has faith in Orlando, but that seemingly has to be tested at some point unless he wants to go down with the ship. Orlando’s defenses have allowed 30 points or more in five straight games and 119 points the last three games.

The Longhorns still have a winning record at 5-3, but a winning record will never be the goal in Austin. It’s expected. And unless you’re a fan dying to get invited to the Camping World Bowl in Orlando, Fla., this has turned out to be an unmitigated disaster to this point.

The last three games, Texas got crushed everywhere but the deceptive scoreboard by Oklahoma, needed a last-play field goal to squeak by one of the worst teams in all of college football in Kansas — at home, no less — and most recently got whipped by an average Horned Frogs team and a true freshman quarterback impersonating Sam Ehlinger.

After losing to the blood rival Sooners, the Longhorns were bent on running the table. But after eking by the Jayhawks and falling to the Horned Frogs, the tables have been turned on Texas.

Things are looking worse, not better.

“There are no excuses,” Herman said. “We’ve got to get the guys who are healthy ready to play.”

Granted, the team is battered in the secondary, but the rest of the team remains healthy, which makes the recent shortcomings all the more baffling.

The same team played top five LSU toe-to-toe but is now spiraling down the drain faster than you can say missed tackles. The Longhorns remain tied for third in the Big 12 with three other teams and will play two of them (Kansas State and Iowa State) as well as unbeaten front-runner Baylor. That’s either good new or horrifying news, depending on how much a diehard you are.

This program is rapidly wasting the career of a brilliant quarterback, albeit a frustrated Ehlinger who has played awesome for two seasons but was awash in turnovers against TCU in his worst worst performance as a Longhorn. Three years into his tenure, and it appears Texas is no closer to a College Football Playoff or even a Big 12 championship now than it was his freshman year. In fact, this team doesn’t look a whole lot different than the 7-6 club in Herman’s first year.

To use Herman’s parlance, Texas went 0-1 on Saturday.

A perplexing and, to be honest, a very disturbing 0-1.

“We got a lot to work on,” Ehlinger said. “We got to come together after a loss like this.”

The Longhorns never were in control and followed the same script they’ve used all season, save for Ehlinger’s rare struggles. Aside from spectacular performances by Devin Duvernay and Collin Johnson and strong play from Malcolm Roach, there was nothing to brag on.

The defense looked good in spurts but gave up five scores in the Horned Frogs’ final seven possessions. Texas’ DB-Whew stayed in form and allowed quick-strike deep balls time and again against a TCU quarterback who threw for 132 yards his previous game. The running game was spotty once more.  The special teams remain pedestrian as freshman Jake Smith fumbled his second punt of the year (but recovered it), and Cameron Dicker missed a 26-yard field goal.

Is there a drawing board big enough for Texas to go back to?