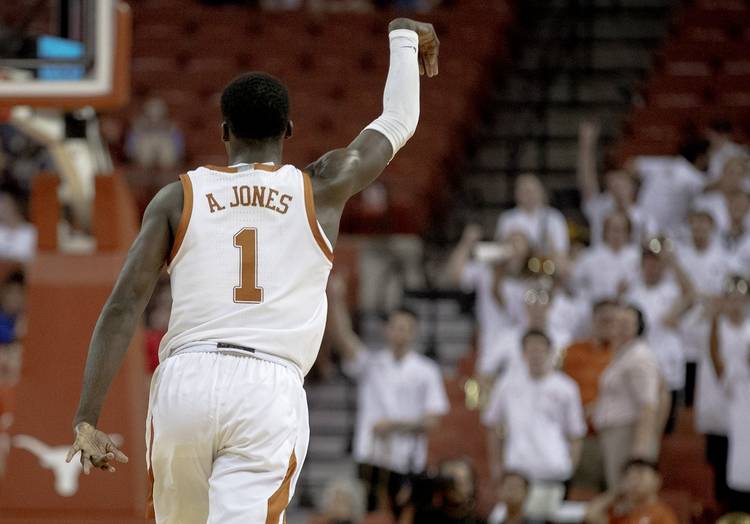 That was easy enough to see. His easy, fluid motion as he ran up and down the court. His burgeoning confidence when he had the basketball in his hands. The unbridled joy with which he played. The first time he hit a three-pointer, Jones sprinted back up court, three symbolic fingers down. Moments later, he sank another and stuck the pose, arm extended, wrist bent, for a few extra seconds.

It was as if he’d never left.

And the appreciative Erwin Center crowd exhorted him at every turn of Texas’ 69-45 season-opening win over Northern Colorado, with every positive play that the sophomore had in a game with four treys and a career-high 20-point performance. Career-high? Heck, after not one, but two medical redshirt seasons, the talented, athletic guard was giddy that he just has a career. And a full, normal life.

Andrew Jones was back. And his long, tumultuous journey was complete.

“Andrew’s a fighter,” said his coach, Shaka Smart. “I don’t think he was that surprised tonight. He’s got an inner confidence. He never gave up.”

Jones returned from the darkest of places, a bottomless pit of frustration and anger, sadness and disbelief that first frightened him, then consumed him and finally pushed him to get back to his passion, his family, his life.

It’s been almost two years since he walked into the training facility in the north end zone of Royal-Memorial Stadium in January 2018 to visit with the basketball trainer and a team doctor. A few weeks before, he’d fractured his right wrist in the closing minutes of a win over Virginia Commonwealth, an injury that sidelined him for the next four games.

Over that Christmas break, he could barely practice. He was short of breath and just didn’t feel right. During one afternoon workout, he almost passed out.

He tried to convince himself that he had some sort of viral infection, a respiratory ailment that fatigued him and might delay his comeback from his wrist injury. But deep down, he knew better. He had no energy, and he had begun coughing up blood.

That morning at the stadium, he received the devastating news that no 20-year-old should ever hear. He had acute leukemia.

All but a death sentence in his mind. His future, once so promising for this pure shooter and electric playmaker, was suddenly bleak. To say he was shattered doesn’t begin to describe the catastrophic meltdown he felt.

“I was sad,” Jones said quietly in a hallway Tuesday night, his big brown eyes staring straight ahead. “I just busted out in tears.”

Over the next two years, he’d go through months of chemotherapy, 12 rounds of 28-day cycles. He had a PICC line inserted in his arm and a fanny pack that held the toxic medicine that flowed through his body to fight a blood cancer that normally afflicts children.

Finally, on Valentine’s Day of 2018, he got a sweetheart of a message. He was in remission. But his medical team wanted to make sure the cancer didn’t return. So the PICC line remained.

Yet, he never complained. “I did a good job of hiding it,” he said, smiling.

Through all of this, he still practiced with the team last season. He’d lost much of his strength and about 10 pounds from the 194-pound frame he sported as a freshman, when the McDonald’s All-American was starting to make a name for himself and connected on 46% of his three-point shots, the only Longhorns player Smart has had with that level of marksmanship.

Jones made it into only two games last season. He played nine minutes against Eastern Illinois on Nov. 6. He scored one point. Ten days later, Smart inserted him again against The Citadel. He played two minutes and scored two points.

Three weeks later, he went back to MD Anderson for another round of pre-scheduled treatment. He returned to school in early January, but didn’t play again.

More treatment followed this spring and summer. He worked on the scout team, wearing a sleeve to hold his medical contraption in place.

Near the end of September, he passed another milestone. The PICC line was finally removed. He got his life back. He felt whole again.

So after not playing meaningful basketball minutes for 23 months, should Jones be considered a miracle man after all he’s endured?

“How can he not?” Smart asked.

Jones began regaining the weight and strength he’d lost. He’s not totally 100%, but he’s not far off. Even he was stunned, however, when he played more than 29 minutes Tuesday, the third most on the team.

Jones still has the homemade sign in his locker at Denton Cooley that reminds him Longhorn Nation is pulling for him. His teammates mobbed him at every timeout. The cleansing adoration from the fans washed over him.

And he’s changed. Smart calls him wiser. Jones, weeks from his 22nd birthday, said he wants to be a better leader and an example for younger players like freshmen Donovan Williams, Will Baker and Kai Jones. He’s certainly got a compelling story to tell.

And now a future. In basketball or out. Life is precious, and he’s got it back.

With every basket, with every rebound, with every sprint down the court, Jones felt like himself again. He’s been rejuvenated by basketball, recharged after months of being poked, prodded, examined, stuck with needles and hooked up to machines.

Tuesday night marked a homecoming of sorts. The happiest of homecomings.

“From a life standpoint, this is just one game,” Smart said. “It’s a terrific thing for him after all he’s gone through. But there are lots of chapters still to be written.”