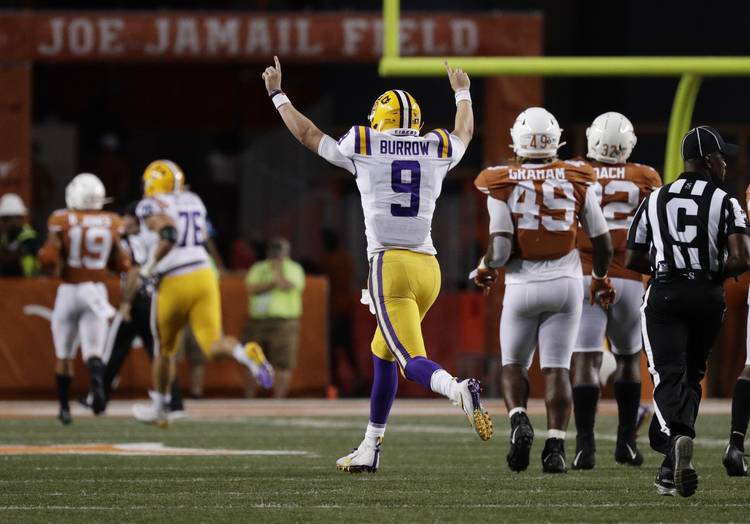 LSU quarterback Joe Burrow (9) celebrates after connecting with receiver Justin Jefferson for a touchdown against Texas on Sept. 7, 2019, in Austin. (AP Photo/Eric Gay)

We went 4-2-1 last week to grow our season record to 38-40-2. Another week or two of positive performances will put us in the money for the first time this season.

The Corner takes the slow and steady approach to life, and gambling. It’s all about how we finish and there’s a great slate of games this weekend to make more interesting with a small bet.

Baylor -2.5 over TCU: TCU might start a walk-on at quarterback with a lingering injury to Max Duggan making him questionable for the rivalry game. The Bears struggled the last time out in a win against West Virginia, but that Thursday game gave Baylor two extra days of rest compared to the Horned Frogs. A motivated Baylor squad is too much for a TCU program reeling after a loss last week and uncertainty at quarterback. The Baylor defense is real.

Kansas State +7 over Texas: Do you trust Texas to beat a ranked team talented enough to upset Oklahoma by more than seven points? I don’t. The Longhorns should be better defensively with the expected return of multiple starters. Texas should win at home coming off a bye week, but my money is on this game coming down to a possession in the fourth quarter. We can’t trust the Texas defense to get enough stops to beat Kansas State by more than a touchdown.

Alabama -6 over LSU: The game of the week deserves a bet, though I admit to not feeling too strongly on this line. I’ll take Alabama since its under a touchdown. This feels like one of those games where Nick Saban humbles an opponent with a ton of hype. This isn’t your older brother’s Alabama or LSU. Expect a ton of points and momentum swings. My money is backing the home team.

Penn State -7 over Minnesota: The other matchup between undefeated ranked opponents provides another opportunity to cash on Penn State. The Nittany Lions are responsible for a pair of our college wins this season and we’re backing them to win by at least a touchdown on the road against an untested Minnesota squad. Penn State was ranked fourth in the first College Football Playoff projections and a statement win on the road only helps.

Packers -5 over Panthers: I expected the Packers to be a touchdown favorite at home. That means I’m jumping on this game now before the market corrects itself by Sunday as big money pours in to support Green Bay. A bad performance on the road against the Chargers doesn’t undo the strong season the Packers were experiencing. The Panthers win over the Titans last Sunday doesn’t move the needle.

Bills +2.5 over Browns: The Browns are falling apart at the seams thanks to a horrible second-year performance from Baker Mayfield. Cleveland can’t get the ball to talented wide receivers, while Mayfield isn’t struggling to find defenders for interceptions. The Bills are a good, steady team that performs well as an underdog. I’m hoping the line grows to +3 by the weekend.

Chargers -1 over Raiders: The Raiders are capable of beating the Chargers. We’ve seen Oakland overachieve in wins against the Colts and the Bears. This team also lost by 20 points to the Vikings. The Chargers are turning the corner with a strong defense and Phillip Rivers at quarterback. Los Angeles enters the game on a two-game winning streak. I’m betting it becomes three after a trip to Oakland.

Lions +2.5 over Bears: The Bears stink. That’s my reasoning. Chicago is only favored because it’s a home game. Detroit should bounce back after a loss in Oakland to the pesky Raiders.