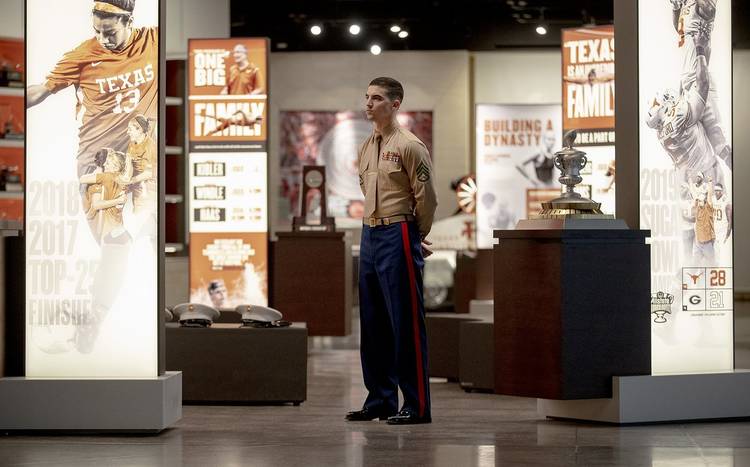 Marine Corps Staff Sgt. Christopher Merrill listens to a speaker during a ceremony as a part of UT's Salute to the Military game week on Thursday, Nov. 7, 2019, in Austin, Texas. The University of Texas recognized three United States Army soldiers who were awarded the Medal of Honor. [NICK WAGNER/AMERICAN-STATESMAN]

Thursday marked the seven-year anniversary of Darrell K Royal’s death, and there are some who have a humble request of all Texas fans:

Please stop referring to the football stadium flippantly as “DKR.”

You’ve done it. I’ve done it. We’ve all done it at some point, if we’re being honest. It’s as common as saying you’re headed to “The Drum” to watch the UT basketball teams. Here’s betting even former UT regent Frank C. Erwin Jr. would’ve called it that, too.

Try telling that to retired Lt. General Lawson W. Magruder III. To veterans, it’s still Texas Memorial Stadium, although they do acknowledge the coach’s name is now a part of the official verbiage.

With Veterans Day approaching, it’s worth remembering why the Texas football stadium is called what it’s called in the first place.

“So we want to keep beating the message, beating the drum loudly every year, to remind people what this stadium is,” Magruder said. “It’s a memorial.”

Magruder presided over a short ceremony on Thursday where the school honored three Medal of Honor recipients that went to UT. These were simply fantastic men.

Neel Earnest Kearby commanded the 348th Fighter Group in the Southwest Pacific. On Oct. 11, 1943, he shot down six enemy aircraft, the most in a single day by an American pilot during the war. He was later shot down in New Guinea and died from his wounds. He’s buried in Dallas.

John Cary Morgan participated in a bombing mission on Hanover, Germany on July 26, 1943. He co-piloted a B-17 plane that was attacked by enemy fighters. The pilot’s skull was split open by an exploding shell, according to military records, but Morgan somehow continued to fly in formation with his squadron and land two hours later. Morgan died in 1991 and is buried in Arlington National Cemetery.

Russell Albert Steindam led a platoon of 35 soldiers on a night ambush attack in Vietnam on Feb. 1, 1970. While moving wounded into a shallow bomb crater, a grenade was thrown into the site. Steindam “deliberately threw himself on the grenade, absorbing the full and fatal force of the explosion as it detonated,” according to the military. He’s buried in Dallas, too.

Here are the three plaques that have been added to the Frank Denius Plaza wall on the stadium’s NW corner. These Medal of Honor recipients all went to UT. pic.twitter.com/f8ZR2BeyCq

All three former UT students now have plaques that will permanently tell their story hanging on the northwest corner wall in Frank Denius Plaza, named after the Texas ex and one of the most decorated servicemen in U.S. history. Steindam’s son, Russell Steindam Matthews, was proud to know that thousands will learn about his father’s heroics.

“My father has the good fortune to be recognized, but millions of people have sacrified around the world that have never gotten the recognition they deserve,” said Matthews, who lives in Nashville but flew in for Thursday’s ceremony.

This is exactly what UT students from the early 1920s would enjoy. It’s what the stadium was meant to be — a memorial for those who served and, in some cases, gave the ultimate sacrifice.

Patriotism has long been a fundamental component of the Texas psyche.

Approximately 500 male students from UT participated in World War I, and soldiers eventually went through training exercises at Clark Field. All told, 91 students, alumni and faculty members died in the effort, according to UT student media records.

In 1923, UT’s only known memorial to those fallen soldiers was a plaque inside what is now called Sutton Hall. State legislators introduced a bill that would have appropriated $500,000 for a memorial building “of indeterminate nature” to honor Texans who died in the war. That effort stalled, though.

There were plans for a “Memorial Dormitory” in 1921, and then an idea for a “Memorial Union” in ’22. Neither idea gained traction. In 1923, there was disagreement on campus what was needed more: An indoor gym or a new football stadium.

On Nov. 25, 1923, a group of 28 students met with school officials, including L. Theo Bellmont. It was determined that UT would go forward and build a football stadium. “That date… should certainly be designated a campus holiday for years to come,” Nowlin Randolph wrote in the November 1924 issue of The Alcalde.

UT regent H.J. Lutcher Stark suggested the stadium should be dedicated to Texans who served in the war. The dean of the UT School of Law, Ira Hildebrand, filed paperwork with the state to form the Texas Memorial Stadium Association. And thus began a rather aggressive fundraising drive to reach a stated goal of $500,000.

Author Richard Pennington described several incredible anecdotes about the stadium’s origins for his excellent historical read, “For Texas, I Will.”

Fundraisers were instructed to use no “evangelistic, pressure-type tactics.” But school officials allowed the newly-formed Texas Cowboys to borrow a cannon from the Capitol grounds and fire it for every $10,000 pledge.

In 1926, families could pay $5.75 to have an 8×12-inch bronze plaque erected in their honor. Records indicate 223 were made and put onto the stadium walls. The six Southwest Conference schools in Texas had a tablet installed to highlight how many students they lost in the war. Texas had 91 names, A&M 54, Baylor 24, Rice 16, SMU 11 and TCU three.

In 1977, Memorial Stadium was rededicated to include veterans of all wars. On Veterans Day in 2009, the school renamed the stadium’s northwest corner Frank Denius Plaza.

Texas Hill Country sculptor Paul Tadlock created “The Doughboy” statue that now sits outside the stadium. Doughboy was a term used to describe infantrymen in World War I, but the statue was meant to represent all veterans.

“Every generation of Americans will pay a price for their freedom — past generations and future generations. This is symbolic for everyone,” Denius said in 2009. He died in 2018 at the age of 93.

Magruder wants to expand the plaza to honor those who died in other wars. Records indicate that 1,663 UT-related soldiers died in World War II. Honoring all will be almost impossible, but Magruder and his committee are sure going to try, with athletic director Chris Del Conte’s help.

“Where’s our World War II names? There were a lot of people in Vietnam,” Del Conte said. “Those that sacrificed for our country should have a place in our stadium.”

There’s room for everybody in Darrell K Royal-Texas Memorial Stadium. Just try not to reduce it to three initials.