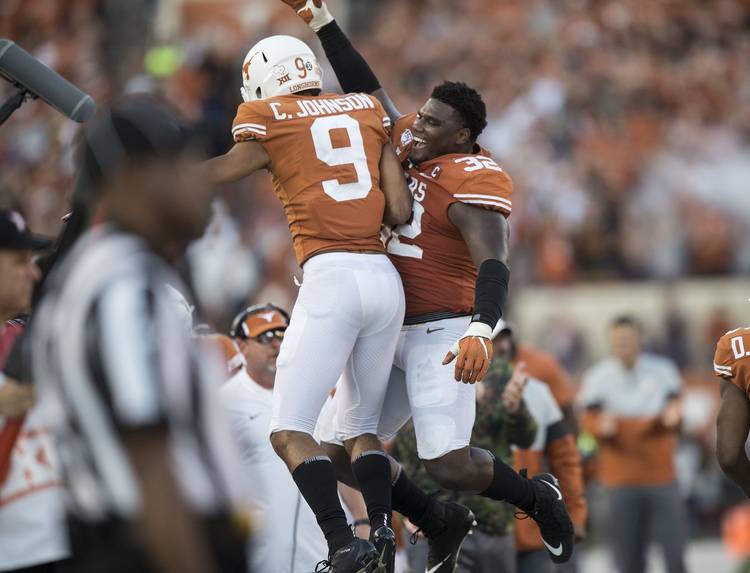 Nine games into its season, there’s one immutable fact about the Texas football team.

The Longhorns don’t do easy.

So hard, in fact, he really should get T-shirts printed up that declare Texas Does Hard.

Even after everything seemed to come easy for Kansas State in the early going Saturday.

So easy that the rising Wildcats, fresh off big momentous victories over Kansas and Oklahoma, raced out to a 14-0 lead on their first two possessions.

And then it turned.

Suddenly realizing its entire season was on the line and the direction for Herman’s program in its third year was at hand, the unranked and so far underachieving Longhorns took matters into their hands.

They looked — and played — like a complete football team.

“Complementary football,” senior wideout Collin Johnson said. “The offense did well. The defense did well. Special teams. That’s what we have to do.”

And that’s what they did, even after that troubling start. Texas is not an elite, dominant team. But for once it was a well-balanced team whose heretofore mediocre defense stiffened and whose offense found a rhythm in the second half and in the final clock-killing drive to set up Cameron Dicker’s game-winning, 26-yard field goal on the final snap for a 27-24 win.

And that represented progress. Clear and abundant progress.

Herman was a little defiant after the game and justifiably proud of the “fantastic” win.

“We put ourselves on the ropes,” he said, “and we took a step toward swinging and scratching our way off the ropes.”

After three crummy games — two of them losses to OU and TCU — Texas served notice that it isn’t going away. Oh, it still trails front-runner Baylor and one-loss OU, but with the win, the Longhorns improved to a respectable 6-3 and a still Big 12-relevant 4-2 in league play.

So plaudits are due.

Todd Orlando, take a well-deserved bow. You get to keep your job as embattled defensive coordinator for another week after tightening up your defense and giving up just one long-distance pass beyond 21 yards when safety Brandon Jones whiffed on a stop.

Cameron Dicker, hear the applause after your third game-winning kick at Texas.

Tom Herman, you coached ‘em up after intermission, and your bunch came out with its hair on fire. Well done.

“We went out and played physical ball,” defensive end Malcolm Roach said. “Everyone on the team has a high sense of urgency. We want to get better and play our best ball.”

They did for three-plus quarters.

So how much improvement was there?

The defense showed up and finally was not a liability.

Orlando’s bunch, more maligned that runaway scooters in this town and almost as hazardous, came alive. After two rapid-fire scores, his unit buried the Wildcats. Save for an electrifying, 98-yard kickoff return by Kansas State’s Joshua Youngblood, the defense totally stymied Kansas State and held it to a lone field goal and a scant 165 yards over the last 50-plus minutes.

Again, obvious progress against the No. 16 team in the College Football Playoff rankings.

And that’s the first positive sign in a month.

Oh, Sam Ehlinger had a rebound game. Keaontay Ingram ran with more burst and anger than he has all season. Twin tandems of Johnson and Devin Duvernay had spectacular, 100-yard-plus performances. And the 67-yard, 13-play march capped by Dicker’s kick was a thing of beauty.

“I was just looking at the beautiful crowd and standing on the sideline,” an appreciative nose tackle Keondre Coburn said. “We showed what would happen when we’re fully healthy. Our defense has been good. We’re just hurt.”

That was clearly the best news. Following those two touchdown passes, both of which came at the expense of Brandon Jones, Orlando’s crew forced five punts and a fumble that Texas recovered. K-State got stuffed.

Curiously enough, Texas lined up in a four-man front on the game’s opening play and brought more pressure on an opposing quarterback than it has all year. Roach, who once ran side by side with a Kansas State running back on a wheel route, was his usual disruptive self.

Texas produced three sacks and four hurries — two of them from linebacker Joseph Ossai — and made six tackles for losses. After giving up more cushion than a furniture store, they tightened up their coverage, played a little more press coverage in the second half and only got burned deep once.

Now Texas is set up to make its own run at the Big 12 title game, but will need some help. Baylor survived its own scare in Fort Worth and will have to navigate back-to-back tests from OU and Texas the next two weeks.

It’s a long, long way from perfect, but Herman will take progress for now.

Because progress, too, is hard.

Golden: With its season on the line, Texas boots Kansas State behind its leaders