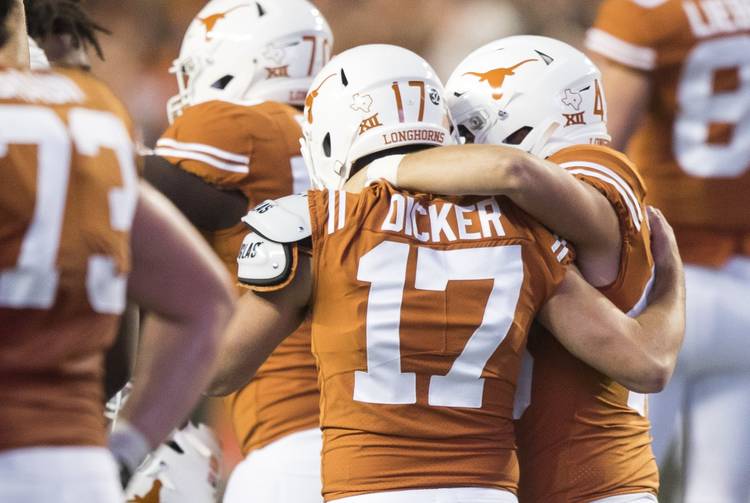 Congratulations go out to the Texas Longhorns.

But the Longhorns got the desired result.

Because of their leaders.

They shrugged off the early 14-0 deficit, the long kickoff return surrendered for a touchdown and a red-zone interception and pulled their teammates across the finish line by a nose. At this time of the season, teams that know they won’t be part of the College Football Playoff conversation understand that style points stopped mattering a long time ago.

Survive and advance. Texas did both, and as a result, they’re still a player in the Big 12.

“Obviously we put ourselves on the ropes and come out sort of swinging and clawing and scratching our way out, but we’ve got to go on the road and continue to get off the ropes,” Herman said. “Doing it with this level of confidence helps.”

Kansas State is far from a world beater, but the Wildcats came in here with a plan and early on, it was working to the mass chagrin of the home faithful, who wondered over the bye week whether their team was going to turn that Fort Worth nightmare into some ATX bounce-back.

When times get tough — in a fan base, in a locker room, on a coaching staff or life in general — leaders mush emerge. In the nick of time, the biggest dogs on this roster arrived to administer a heavy dose of it’s-going-to-be-alright.

Roach provided the physical and emotional support this defense needed against a team that has made its bones on pounding opponents into submission with a deliberate ball-control offense. He did a few turns as a linebacker in addition to his normal defensive end position. Above all else, he has emerged as one of a struggling defense’s bright spots.

He gave the team muscle and moxie, something that helped pull them through.

“Young guys can get rattled in situations like that,” Roach said. “I’ve been doing this for a long time. I’ve been around the block a few times, so I’ve seen things like this before. You can never get rattled. You can get too high or too low.”

Ehlinger rebounded from that four-interception performance against TCU to play more like the Sammy we’ve become accustomed to. He completed 22 of 29 passes for 263 yards — 14 of those going to Johnson and Duvernay for 220 yards. Ehlinger is a junior but he’s the alpha dog on this team. Still, even the big dog had to give a nod to Roach.

“He’s that elderly voice we needed to hear,” Ehlinger said.

Jones provided the second biggest special teams play of the year, after that blocked PAT for a two-point against Kansas. All was needed to get one in the books.

So here they sit at 6-2 overall and 4-2 in conference play. The Horns are who the standings say they are: The third best team in the Big 12. They would have relinquished that position had the 16th-ranked Wildcats finished like they started, but Texas stood strong and like Steve Perry crooned at game’s end, they didn’t stop believing.

They’re embattled but they imposed their collective will on a team that came in here with plenty of confidence after taking out Oklahoma and Kansas in successive weeks.

It doesn’t get any easier for Texas: At Iowa State, at Baylor and then home for Texas Tech the day after Thanksgiving The Big 12-leading Bears may not be on the same level as teams like Ohio State, LSU, Alabama and Clemson talent-wise, but give it up for the undefeated Waco City Grizzlies because they went into Cowtown and turned a 9-0 third-quarter deficit into a 29-23 overtime win over TCU.

More important, the Bears have been able to win road games in conference, something the Longhorns will have to do if they have any hopes of returning to Jerry World for a second consecutive appearance in the Big 12 title game.

The TCU loss behind them now, the Horns are still in the mix with things to fix.