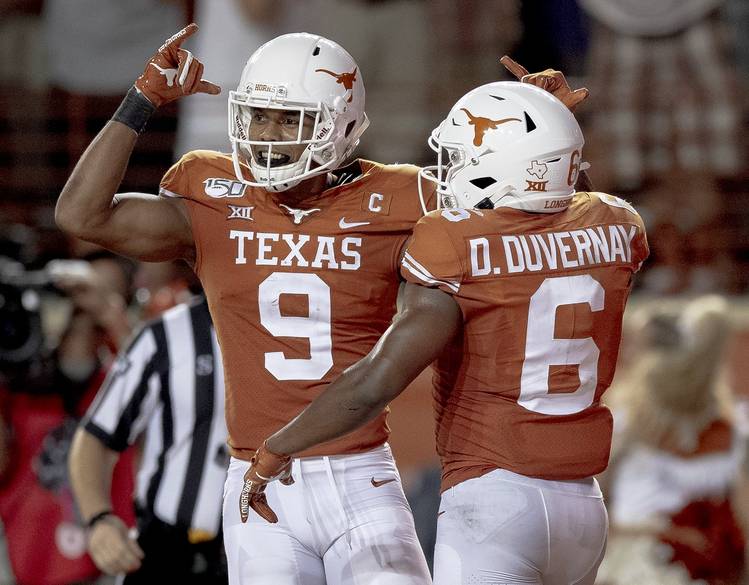 Or, rather, relocated it.

You know, the formula that was supposed to carry the Longhorns to double-digit wins again and ultimately the College Football Playoff to rub elbows with the powerhouses, a narrative that was shattered early after Texas’ second loss of the season in its first six games.

A team with a 4-2 record at the midway point no longer considers the Final Four a destination, only a fantasy.

The Longhorns have been scrambling for a foothold ever since but have been stymied by a horrible defense that can’t rush the passer, can’t tackle in space and can’t defend the deep ball and a running game that has largely been hit and miss all season.

On Saturday, they made the necessary corrections and were rewarded.

The best version of the Texas football team was in full display for all to see in a riveting, 27-24 comeback win over 16th-ranked Kansas State on Saturday.*

(The asterisk is necessary because the Longhorns looked totally discombobulated and lost in the opening minutes of the game.)

The 14-0 deficit notwithstanding, Texas (6-3) looked solid thereafter. Not perfect. Not elite. Not dominant. But really good. Good for three quarters against a strong opponent that had upset Oklahoma.

And good enough to remain in the mix for one of the two spots in the Big 12 championship game in Arlington if — a very big if — a lot of things happen.

With Texas, there’s always an if.

However, that team from Saturday can run the table against Iowa State (5-4) this weekend, Baylor the next and Texas Tech the day after Thanksgiving if it follows the same form. But that team rarely shows up week after week.

This time, though, Sam Ehlinger had help.

Keaontay Ingram ran hard and fast with his best day as a Longhorn to keep the Wildcats off balance.

Devin Duvernay and Collin Johnson had twin 110-yard performances, making it hard to double either and still bottle up the ground game.

The defense, victimized on five of Kansas State’s six third downs in the early going, didn’t give up another third down the rest of the game and gave up three points to the Wildcats’ offense the last 50 minutes.

Nobody got deep on the secondary.

Asked if the balanced offense and an obviously improved defensive performance were the ingredients for the type of team he envisioned in August, Herman said, “Yeah, I think so. I think playing complementary football the way that we did, to be able to beat Kansas State the way that we did in terms of time of possession and running the football and stopping the run, I think, is exciting. Obviously we’ve got to replicate that throughout these coming weeks.”

The problem is this is a team that has been wildly inconsistent with huge swings of success and mediocrity, often in the same games, and hasn’t been all that on the road.

It’s a touchdown underdog against Iowa State, which has four tough losses by 11 total points. That includes a two-point loss to Baylor — which dominated for three quarters — and single-point defeats by Iowa and Oklahoma last Saturday. It had no offense against the Hawkeyes and no defense versus the Sooners, giving Matt Campbell’s club a look of unpredictability.

In truth, Texas and Iowa State are the two most underachieving teams in the league. Picked just behind the Sooners, they both can still make a run, but they have seven losses between them, six in the Big 12. It’d be difficult to say which of the two is better because they’ve both had similar issues in pass defense where the Cyclones are ranked 73rd and the Longhorns 124th.

But Iowa State will at least be at home.

In four away games, Texas has a 2-2 mark with a pair of victories over hapless Rice and hopeless West Virginia, two teams that are a combined 3-15 and have one Conference USA/Big 12 win between them. The Mountaineers this season have been outscored by 99 points, the Owls by 119. They’re bad.

“It’s harder to win on the road. That’s why they call it a home-field advantage,” Herman said. “If you allow the (forecasted cold) climate to be a distraction, that can be a hindrance as well. But we have proven … we feel like West Virginia’s atmosphere is really dang good , too. and we played well there. We didn’t play real good in Fort Worth.”

In the Longhorns’ two road losses by 17 total points, counting the neutral-site Cotton Bowl, they played poorly against Oklahoma and TCU even though they somehow managed to keep the margins fairly respectable.

“It’s harder to win on the road, there is no doubt,” Herman said, “but it’s not something we lower our expectations for.”

Who knows just what those realistic expectations are these days.

Golden: Ramey, Texas guards are taking care of business in the early season