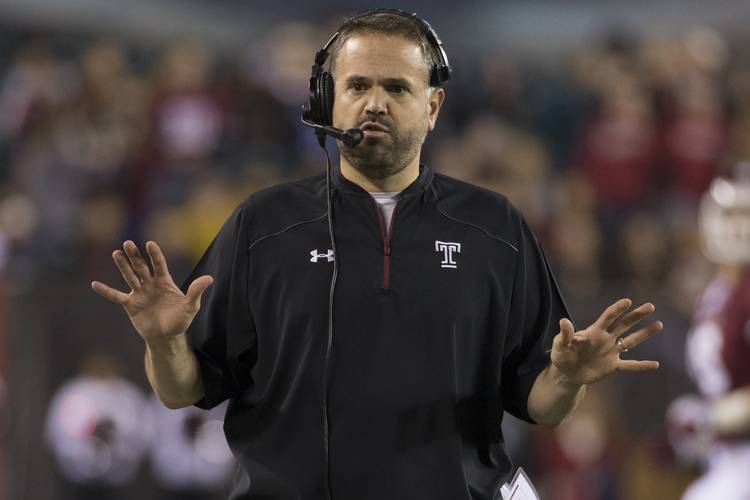 FILE - In this Nov. 28, 2015, file photo, Temple head coach Matt Rhule reacts during the first half of an NCAA college football game against Connecticut, in Philadelphia. Rhule is the new coach at Baylor, where he takes over a beleaguered Big 12 Conference program after winning 20 games over the past two seasons at Temple. (AP Photo/Chris Szagola, File)

Gambling is a painful love. A tricky mistress. We found that out last week with a 3-5 record that could have easily been 5-3 with a few breaks. Instead, the record for the year stands at 41-45-2. Not great. The meat of the college football schedule is upon us, while the NFL is at the midway point. It’s time to cash.

The Corner takes the slow and steady approach to life, and gambling. It’s all about how we finish and there’s a great slate of games this weekend to make more interesting with a small bet. With a heavy bye week in the NFL, we concentrate on five college football bets.

Baylor +10 over Oklahoma: This is the game of the week in the Big 12. Oklahoma enters as a 10-point favorite on the road against the undefeated Bears. I won’t go out on a limb and say Baylor wins this game, but I’ll feel comfortable with a 10-point cushion. This Sooners team isn’t perfect and was one Iowa State two-point conversion from entering this game on a two-game losing streak. It’s hard to imagine a blowout with so much on the line for Baylor.

Texas +6.5 over Iowa State: This is a contest between two relative 2019 disappointments. Both were expected to compete for a Big 12 championship, yet it’s Baylor that has emerged through two-thirds of the season. The winner of this game still has a shot at reaching the Big 12 title game and I expect a close game. Texas’ defense played great against the run in a win over Kansas State. That gives me the confidence to take the Longhorns and the points.

Texas Tech +3 over TCU: We might as well continue the trend of taking the underdogs in the Big 12. TCU lost a winnable game in overtime against Baylor and it’ll be hard for the Horned Frogs to reach the same intensity on the road against Texas Tech. The Red Raiders can get in position to reach a bowl with a home win against TCU. Texas Tech can outscore TCU.

Georgia -3 over Auburn: We picked Georgia to win the SEC East heading into the season and a win over Auburn is another step toward the College Football Playoffs for the Bulldogs. Georgia is fourth in the rankings this week. Give me a motivated Georgia squad to win by more than a field goal against a freshman quarterback at Auburn.

Minnesota +3 over Iowa: Minnesota burned us against Penn State last weekend, so this weekend we back the Gophers on the road against Iowa. I can’t turn down three points and the undefeated team against Iowa. This line is weird, which scares me.

Golden: Ramey, Texas guards are taking care of business in the early season