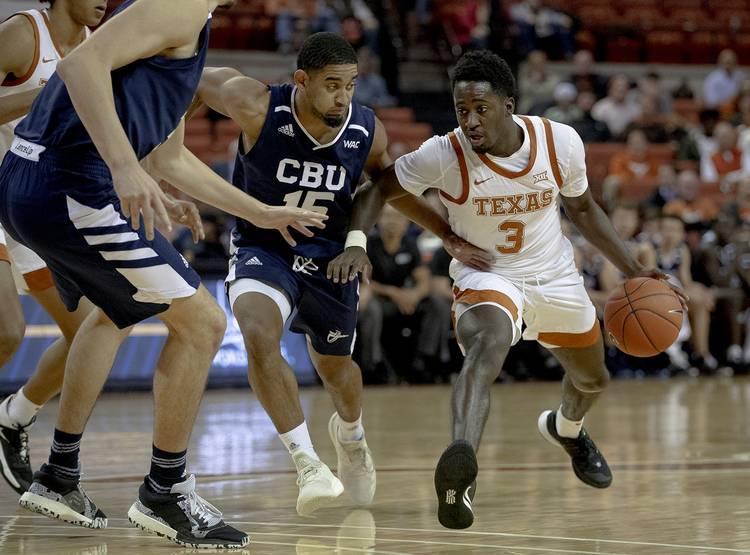 The guards are running things early.

That’s how it will have to be this basketball season if the Texas Longhorns are to make some real noise in the postseason.

Tuesday’s 67-54 win over California Baptist gave us a look at how Texas could look come the money games. The guards will lead this group either to the Big Dance or down the drain to futility. Courtney Ramey. Matt Coleman. Andrew Jones. Jase Febres. Those are the names that make or break Texas this spring.

Either way, it will be an interesting watch. The 3-0 Horns have playmakers, and we’re not just talking solely about scoring the ball but the ability to create opportunities for others.

After the first three games, including that statement road win over a Purdue team picked to finish fourth in the physical Big Ten, it has become evident that the Horns will go as their perimeter guys go. Jones was the story in the season opener over Northern Colorado with 20 points. Matt Coleman averaged 16 points in the first two games.

Tuesday was Ramey’s turn and the sophomore, who scored  just one point in West Lafayette, put the team on his back amid a dry spell at the bucket. Texas made only two of 16 shots from behind in the arc in the first half half, which allowed the Lancers, who were 16-point underdogs, to stay within striking distance.  Some locals at Club Erwin, amid the early brickfest, couldn’t help but flash back to last season’s soul-taking 62-59 loss to Radford where the Horns blew a double-digit lead and made only five of 27 3-point attempts.

But this time, Texas came out with a new approach after the half and Ramey was the focal point. A mercurial sort who can get his shot off any time he wants, he played the patient role early, but when it became apparent that his team needed an offensive lift, he was more than ready. He scored 15 of his game-high 19 points in the second half and helped turn a would-be nailbiter into a relatively comfortable win.

“I think it just happened,” Ramey said of his eruption. “It was just, I had it going, so I just asked for the ball, (coach Shaka Smart) gave it to me and good things happened. That’s the good thing about our team having two dynamic guards. You don’t know whose night it might be. It can be Andrew (Jones) the next game or Jase (Febres) the next game. We have a great team and we’ve got a lot of deep players.”

Ramey loves his jumper, and we’ve all watched him sometimes launch them from Curry-like distance, but he seems to understand that he helps the team more with high-percentage drives and being more judicious with the J. That’s maturity happening. On Tuesday, he put his head down and attacked the rim with the type of aggressiveness that allowed the others to follow his lead. He also found teammates open on the perimeter for wide-open shots, shots that would have been contested had the Lancers not had to tend to his drives.

“He’s good, ” said Lancers coach Rick Croy. “He’s a confident player. You know when you’re training defensively to start the year, you tell guys ultimately you’re going to run into perimeter players that can shoot it, drive it and make shots off the dribble.  He’s that.”

The four guards are still learning how to co-exist on the floor, since it’s obvious that Smart likes this alignment, particularly the one with 6-9 jumping jack Jericho Sims manning the paint. The four-guard look depends on what the other team puts on the court, but on a night like Tuesday where the Lancers had only two starters 6-7 or taller, it worked well, like it did against Purdue, especially after the Horns got it going in the second half.

“It gives us more decision makers on the floor, and depending on who we have in the game, more shooting,” Smart said. “Obviously it makes you smaller and can impact your rebounding. But at the end of the day, you want to have five guys out there that can create for each other and play together.”

Good start, Texas. Thanks to the guards.

Bohls: In this Big 12 stretch run, Texas will follow the same blueprint or sing the blues