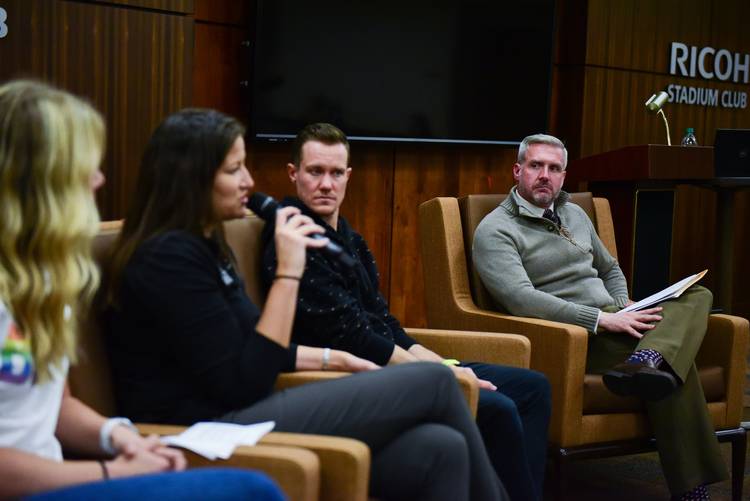 Here in Austin, where keeping it weird is a way of life, you can be whoever or whatever you want. Just not homeless. That’s frowned upon.

Imagine you are the best athlete in your sport, so good in fact the University of Texas offers you a full scholarship. This is amazing! Hook ’em, the whole bit. Your parents are proud, the coach is ecstatic, your friends and family can’t wait to wear burnt orange.

Come on down, because you can be whoever you want right?

Should you tell your parents back home? Or the coach that controls your scholarship?

Who exactly can you talk to when the pressure to win at Texas starts mounting, your performance slips, so do your grades, the media turns up the heat, social media runs wild and, oh, by the way, you’re keeping a major lifestyle secret forcing you to hide who you really are?

On Tuesday and Wednesday, the NCAA’s Office of Inclusion held its fifth annual Common Ground conference inside Royal-Memorial Stadium. It’s the first time that the event, meant to be an inviting space for student-athletes, coaches and administrators, was held at a public institution.

Amy Wilson, the NCAA’s managing director for Inclusion, admitted some people actually said, “You really going there?” As in, are you really bringing a conference about LGBTQ issues in college athletics to red-state, conservative Texas? Like, the University of Texas?

Want to bring real attention to an issue? I say bring it to UT, a school with a platform, progressive mindset and microphone as big as anyone’s in higher education.

The NCAA has over a half-million athletes. If it’s serious about developing 18- to 22-year-olds, Wilson said, “Then we have to make it a priority to create spaces and environments where there is respect and dignity and they can prosper.”

Reporters were not allowed during the two-day function. The whole idea was for UT athletes, coaches and administrators to meet with people from all across the college landscape and talk openly. Tape recorders and cameras tend to be deterrents.

Drew Martin, UT’s director of external affairs, said there were about 75 participants. Some were from public schools, many came from smaller Division II or III schools and others from faith-based institutions where LGBTQ issues are likely kept hush-hush.

It was worth going just to meet Chris Mosier, the first transgender athlete to earn a spot on the men’s Team USA. The long-distance runner and triathlete would be so worried at the starting line about what other competitors were thinking, it affected his performance.

“Personally, when I came out, my performance excelled,” Mosier told the American-Statesman. “Once you are able to own all the power of who you are, the world becomes a much better place.”

To be clear, this wasn’t a seminar where NCAA officials were trying to out people. Really, it wasn’t about forcing anyone to do anything. There was a deep dive on issues that create incredible angst for gays, those thinking about transitioning and people who want to understand but are afraid to ask.

For a lot of coaches, Martin said, “They don’t know what to say in that situation, because they’ve never been faced with it.”

Take basic vocabulary, for example. What’s the proper pronoun use for a transgender person — he/him/his or she/her/hers? On a lot of campuses, athletic departments that pride themselves on having the best equipment, weight room, academic tutors and nutrition would send athletes somewhere else on campus to figure it all out.

What if an athlete wants to come out publicly? How would that be received by the athletic department? By the media? By the fan base that contributes thousands in donations and season tickets?

It’s long been my belief that if a UT athlete wanted to come out, it’d be met with a collective shrug within the athletic department. No offense, intended. That’s a positive. This is Austin, for goodness sake.

UT swimmer Matt Korman came out in 2013. Divers Jacob Cornish and Kennedy Lohman both helped the Longhorns win Big 12 titles last spring. There are other gay athletes at Texas, but for whatever reason, they choose to remain quiet. Don’t judge.

Kansas State football player Scott Frantz came out in 2017. At the time, then-UT defensive end Naashon Hughes said more people need to come out. “I think that would help today’s society a whole­ lot more than where we’re at right now,” he said.

At Big 12 football media day in 2017, Texas coach Tom Herman said, “If we are family like we say we are, then this member of our family has just shared with us a piece of information that’s a bit sensitive — but he’s also asking for your love and acceptance. I think we’d be just fine.”

Mosier laughed about that old stereotype of “what’ll happen to the locker room.” But he wasn’t laughing about the idea that it’s mostly the media that sensationalizes an athlete’s sexuality.

Think about this: Would Missouri’s Michael Sam have had a better shot at the NFL without all the fuss in 2014? Sam didn’t make his sexuality a big deal, although he did come out just before the 2014 draft. The media blew it up into a larger-than-life story and basically short-circuited his career.

“Just because I’m gay doesn’t mean I lack taste. Sorry to shatter your illusions here,” Mosier said. “By focusing our attention on locker rooms and restrooms, that’s a dangerous path to take.”

There are gay administrators, coaches and athletes throughout college athletics. My guess is UT fans would cheer for those in burnt orange just as much as they’d boo those wearing Oklahoma crimson and cream.

“My hope would be that any of our student-athletes, high-profile or otherwise, if they came out, they would be supported and embraced,” said Martin, the detail-oriented architect behind Bevo Boulevard. Any Texas athlete who wants to come out as gay or lesbian would have the full support of the department behind them, he said.

“How would it play out? I don’t know,” Martin said. “I know from my own personal experience that I built up a lot of things in my head that would not be accepted. I would be fired. I would never have a career in college athletics. I had colleagues tell me, ‘You will never achieve what you ultimately want, which is to be a Division I athletics director.’ And I feel like I’m on a fairly good path as an out gay man to do that.”

Wilson said every coach and administrator should have a simple message for any athlete who wishes to talk.

“I’m listening to you. I care about you. I’m here for you,” Wilson said. “You don’t have to know all the answers. But giving that unconditional support and love and conveying that I’m on this journey with you, that’s a very important part of that.”