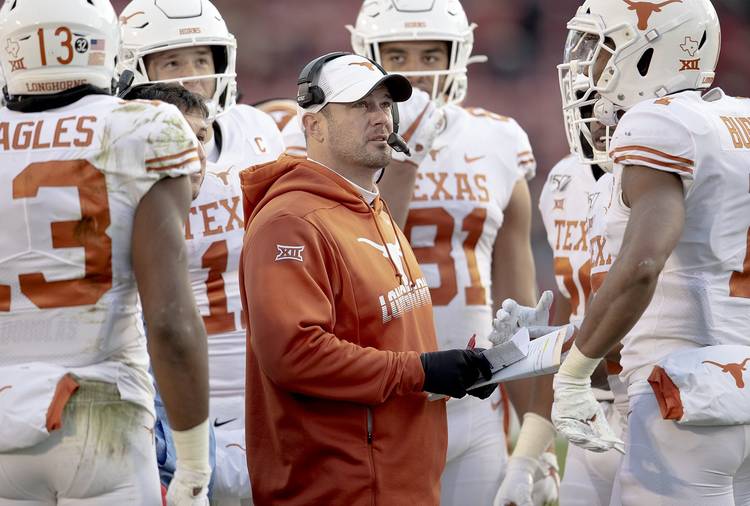 Saturday’s 23-21 loss to Iowa State wasn’t about any specific unit that played on the field.

The loss was comprehensive in scope, but shouldn’t be attributed entirely to the players who participated.

This one was mostly on the coaching staff. Texas played undisciplined ball, didn’t look anywhere near inspired in the first half and lost because Iowa State was the better team. Not the most talented one, but the better one.

Any blame should start with the guy at the top.

Thomas Joseph Herman III is the man sitting in the big office. He’s the one making $6.75 million this year if you count that $1 million bonus check that will drop into his checking account on Christmas Day. He’s the one who led the team to a Sugar Bowl title last season, fostering hope that this program would take another step forward in Year 3.

He has capably led the Horns out of the Charlie-Strong wilderness, but the plan didn’t include a near-loss to woeful Kansas, a no-show at TCU and this latest disappointment.

More on that later, but first, let’s go back to the final minute of the game.

I stood near the Texas bench at Jack Trice Stadium with nattily attired UT athletic director Chris Del Conte, he of the recent $18 million contract extension. It was money time and the defense needed a stop to escape the Heartland with a season-sustaining win.

The defense was up against it after the offense had taken a one-point lead on Sam Ehlinger’s magician-like touchdown pass to  a diving Malcolm Epps, but the Longhorns had failed in the subsequent drive to run out the clock, giving the Cyclones one last chance to pull it out.

“My mindset was we were going to go back on the field,” Ehlinger said of how he felt being up 21-20. “We did and couldn’t get a first down. We pride ourselves on being able to run out the clock and keep our defense off the field and we weren’t able to do that when it came down to it.”

So it was up to the defense, a unit that’s long on guts but short on a pass rush and couldn’t hold its water. Safety Caden Sterns was flagged for pass interference, putting the Cyclones in play for kicker Brayden Narveson to become a hero with a 42-yard field goal.

“He won’t make this,” I told Del Conte. “You can never trust a college kicker.”

Narveson missed badly, and in Texas’ perfect world, Ehlinger would have trotted on the field to run out the clock for a seventh win and some needed momentum going into the final two weeks.

So back to that Christmas line. It came early for the Cyclones, and Santa’s elves were disguised as two UT football players who jumped offside. Five penalty yards later, Assalley’s choke essentially had become just a practice try. Reprieve granted, the Cyclones ran the clock down to four seconds and this time,  replacement kicker Connor Asselley was true.

In a manner of seconds, the Horns went from 7-3 to 6-4, from 5-2 in the conference to 4-3, from a would-be challenger for Oklahoma’s Big 12 crown to a team that’s just trying to figure out how to beat two in-state rivals in order to avoid a bad bowl game.

Herman had no answers for why the Horns could go from running for 214 yards against Kansas State to averaging 2.0 yards a carry. He had no answers as to why his offense nearly reached double-digits in three-and-outs and didn’t get a first down in the first 10 minutes of play.

“It was a really really poor performance by our offense the first few quarters,” Herman said. “We have to really examine our run game and our execution. To not be able to run the ball like we thought we would … that was the biggest difference.”

Two of the late penalties were questionable, but the Horns never should have been in the position of having to defend a lead that wasn’t theirs until the the final 5:37.

The Horns had everything to play for. They knew a win over Iowa State would keep their Big 12 title hopes at a flicker. They knew the Cyclones have had some uneven moments. They understood that Brock Purdy was at the head of the league’s top passing offense.

Their coaching staff didn’t have them suitably prepared to win.

Now they’re a third-place team at best. For a group that entered the season thinking well beyond a Big 12 bronze, the season has taken on the look of failure. They talked about shooting for the stars, but the Horns ended up shooting themselves in the foot.

There are two games left, but title hopes no longer reside in the hearts of Horns fans.

Texas didn’t get it done and it all starts with the head coach.

Bohls: OU’s got a real shot at playoffs