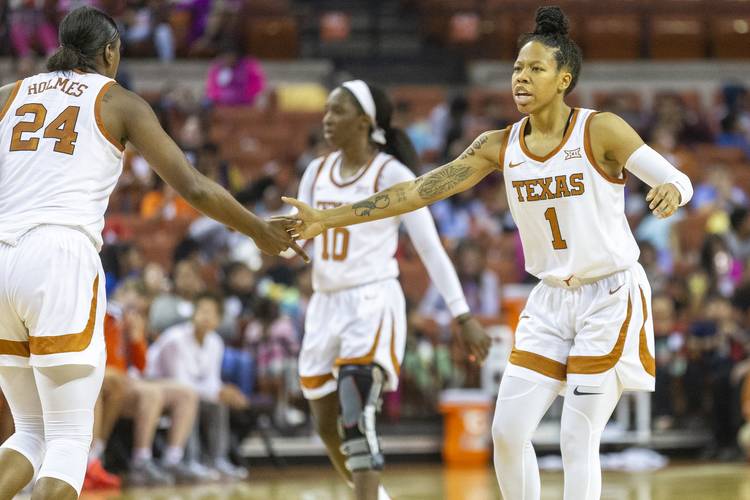 There was a lot to like on Wednesday in a very predictable, 85-69 blowout win over UT Rio Grande Valley, a necessary tonic for a scuffling Texas women’s basketball team looking to find itself.

Like the 11 3-pointers the Longhorns made, six of them from freshmen Celeste Taylor and Isabel Palmer.

Like the balanced scoring with six players in double figures, paced by Joyner Holmes’ 19 points.

Like the plus-25 rebounding margin over the lesser, tremendous undersized opponent.

All was good, including a raucous, appreciative audience of 7,233 that included more than 5,000 fourth- through seventh-graders for the annual 40 Acres Field Trip game for students from 54 Central Texas schools.

Lane Lord liked what he saw.

“I love watching Holmes. She’s my favorite player,” said the impressed UTRGV second-year coach. “She’s a big-time WNBA player, a first-rounder in my mind, for sure. And how about (Charli) Collier, just a sophomore. That one-two punch is really tough to beat. If they can get their guards to make a few shots, Texas has a chance to be outstanding.”

She did finally get her guards to fill up the basket. The Longhorns got the transition game in gear. She got a much-needed win after losing at home on Sunday by 25 to Arizona, a talented team but one that’s still picked sixth in the strong Pac-12.

“It was pretty nice to see (shots falling),” said Taylor, who hit three treys and also had a pair of steals after connecting on just one of 11 long shots and three of her first 21 overall attempts. “My teammates were finding open shots and reversing the ball. It was good to see the ball go through.”

But the defense was something else again. Same for turnovers, which has for so long been an Achilles heel that it’s probably taught at the Dell Medical school.

Aston wasn’t at all pleased with those two phases of her team’s routine win over the school formerly known as Pan American, one that had lost by 27 to Texas Southern.

For the second game in a row, an opposing guard went on a tear, this time when 5-8 guard Trelynn Tyler scorched Texas for four bombs and 29 points. On Sunday, Arizona’s pint-sized scoring machine Aari McDonald sank all but four of her 18 field goal attempts to score an all-time road opponent-high 44 points on the Longhorns at the Erwin Center.

That and the maddening issue of turnovers continue to haunt this team that showed a glimpse of its offensive prowess and shooting ability but must solve the other two problems if it hopes to have any success this season. The Longhorns were guilty of 20 turnovers, 14 in the first half. They committed 21 in the loss to Arizona and rank a distressing 210th nationally in that category.

As solid as Holmes was offensively, she was guilty of four turnovers and her post-mate Collier five. But seven Longhorns had miscues ranging from five traveling violations to poor cross-court passes and even on an inbounds play.

“I continue to be a little frustrated because we’re careless with the basketball. We’re not making plays there, and I worry about our inability to guard the basketball,” Aston said. “Everybody knows I love defense. We’re just not guarding the ball very well.”

Aston turned to a 2-3 zone for much of the second half against the height-challenged 2-2 Vaqueros, who relied mostly on a lineup with no player taller than the 6-foot Jordan Agustus. They were no match for the 6-5 Collier and the 6-3 Holmes, who between them had 21 rebounds, seven of them offensive.

That may be a choice of last resort for Aston, who’s still displeased over her defense allowing 21 three-pointers in the last two games.

She joked that because two of her freshmen, Taylor and Palmer, hail from New York and Australia, perhaps it’s a language barrier.

“We try to understand a New Yorker,” Aston kidded. “I’m not sure we know what either one of us is saying. Maybe that’s why we don’t understand each other on defense.”

Kidding aside, she knows they have to develop an awareness of better team defense and ball-handling and decision-making on the offensive end if Texas is to make any serious challenge of Baylor’s supremacy in Big 12 play.

In fairness, Palmer had a foot stress fracture injury as did returning senior Sug Sutton, and senior guard Lashann Higgs is still trying to come back from her serious surgery for torn knee ligaments. That was a huge setback to their offseason and early fall workouts.

Higgs contributed in a big way, hitting five buckets in an 11-point effort but more importantly crashing the boards for a team-high in rebounds.

That’s the kind of impact Aston is searching for from her guards, so they don’t have to just rely on the bigger Holmes and Collier down low.

“Every day is another chance to get better and get back to my old self,” Higgs said. “I just take it one day at a time. It’ll eventually come back. I feel my game is a little more balanced. I’ve got to be more patient.”

Maybe this win will settle Texas down and make the Longhorns more aware of what’s needed to be done, especially concerning defensive stops and turnover issues.

“We sometimes are over-anxious,” Aston said. “At this level, we just need to make the simple play, shorten our passes, meet passes better. Just slow down. We’re in too big of a hurry, and that’s where turnovers come from.”

At least they’ve identified the problem. Now they have to fix it.

Craven’s Corner: Backing the Bears over the Longhorns, plus other Big 12 plays