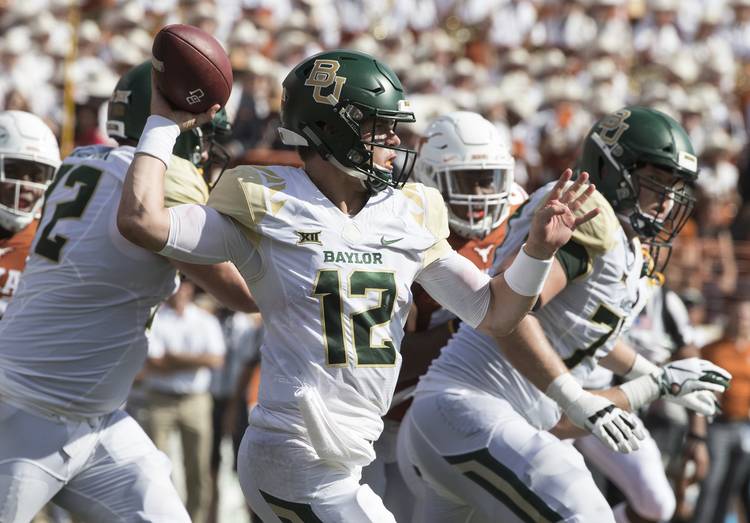 Don’t call it a comeback! Craven’s Corner went 4-1 last weekend to bring our season record to 45-46-2. We’re inching our way toward the money as the season gets truly interesting. This week we’ll focus on the Big 12 and a few NFL plays for Sunday.

Baylor -5.5 over Texas: The Longhorns head to Baylor as a 5.5-point underdog. The Bears should be ready to prove they’re capable of playing four quarters of complete football against a name-brand program like Texas one week removed from a prime-time collapse against Oklahoma. Baylor is the better defensive team. Combine the consistency of Baylor with its ability to win close games and it feels like a touchdown loss for Texas.

Oklahoma State -7 over West Virginia: I love the Cowboys. Oklahoma State is 8-2 against the spread heading into the road trip to West Virginia. Mike Gundy’s squad currently holds the longest winning streak in the Big 12 with freshman quarterback Spencer Sanders growing up and valuing the football. West Virginia is due for an emotional letdown after knocking off Kansas State.

Penn State +18.5 over Ohio State: Can Ohio State be this good? I’m including this game in the column because it’s the biggest matchup of the week, but a line this big in a game of this magnitude is always worrisome. Ohio State looks unbeatable, which is why I’ll take a three-score advantage and Penn State. This feels like the week Ohio State looks human, even if the Buckeyes win by two touchdowns.

Texas A&M +13 over Georgia: The Georgia offense isn’t explosive enough to give 13 points against a solid Texas A&M squad. The Aggies can keep this one close and haven’t really been tested since October. A game against UTSA was followed by a bye week and then a win over South Carolina, so A&M should be plenty healthy and ready for a dog fight in Athens. Georgia is running on fumes after contests with Florida and Georgia already this month.

Kansas State +2.5 over Texas Tech: Texas Tech lost by two points to TCU at home last week and I consider Kansas State a better team than the current version of the Horned Frogs. Plus, Kansas State needs this win to stop a losing streak. A win for Texas Tech would move the Red Raiders to within one game of bowl eligibility with only Texas left on the schedule.

Texans -3.5 over Colts: The Texans were embarrassed last week against the Baltimore Ravens. I expect a bounce-back effort in a truly important AFC South showdown. Both teams are 6-4 and need to win the division to reach the playoffs. Give me Deshaun Watson over Jacoby Brissett in a game that could decide the division championship. It’s a short week for both squads.

Seahawks +1.5 over Eagles: Bettors hate West Coast teams on the road playing in the Eastern Time Zone, but I’m not worried about that with Russell Wilson at quarterback. The Seahawks must keep winning to keep up with San Francisco, so I don’t foresee Seattle sleepwalking into a road contest with the Eagles. Something isn’t right in Philadelphia.

49ers -3 over Packers: I’m done losing money betting against San Francisco. The 49ers are winning with a strong running game and a dangerous defense. Expect Aaron Rodgers to deal with a ton of pressure from the San Francisco defensive line. This would be a pick-em game on a neutral field. I’ll take the home team and give the points.

Rams +3.5 over Ravens: Baltimore is the hottest team in the NFL and Vegas is the perfect example. The Ravens went from an underdog in their own division to start the season to a 3.5-point favorite on the road against the defending NFC champions. I’m taking the home underdog with playoff pedigree.