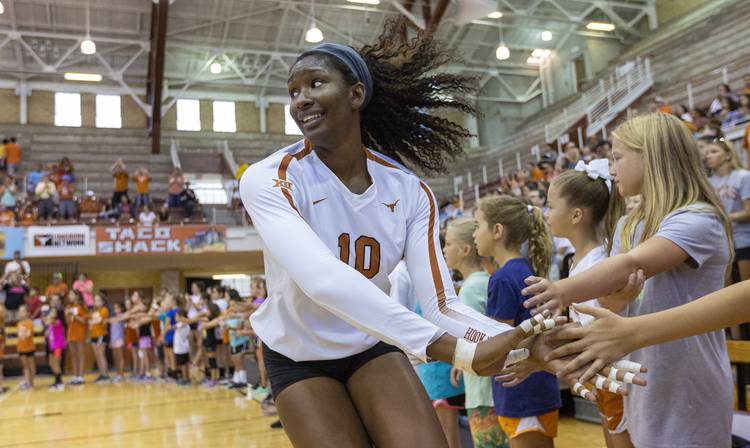 Butler is the exact opposite. Introvert. Quiet. Humble. Selfless. Her hobbies? “Food and clothes,” she said.

“She’s not a big people person, but people still gravitate to her,” Grant said. “Everybody wants to be around Bri. Me, I enjoyed the limelight. We’re like night and day.”

While her mom is a special education teacher at Lamar Junior High in Rosenberg, her only daughter doesn’t really like kids. Both of them admit it. Something about being an only child, they guess.

Butler also hates her first name, a concoction from her divorced parents’ first names Brian and Javonne, and she grows weary of it being pronounced Bri-OWN instead of a soft o. Just correct them, her mom shrugged.

Yeah, the two of them are not at all alike.

Except on the volleyball court. There, they share a common thread.

While Butler was just named to the All-Big 12 team for a Texas team that’s seeded second nationally as it opens the NCAA tournament on Thursday with a home match against Albany, her mom could play a little, too. OK, a lot.

As one of the best hitters in college volleyball at the University of New Orleans, Grant recorded the absurdly ridiculous number of 2,932 kills back in the day when matches were best of three and sets ended at 15 points. Who knows what kind of numbers she would have put up had sets ended at 25 points and if matches frequently went five sets like today.

So who’s better, Butler, a third-year sophomore defensive machine who is an intimidating 6-4 1/2 and the latest in a long line of middle blockers at Texas, or Grant, who by her own admission “just killed the ball” every time she came near the volleyball.

“Oh definitely,” Butler said. “She might argue it, but I know for sure I’m the better player.”

Butler heard some rebuttal from Longhorns assistant Tonya Johnson, who played at LSU against her mom, but she will get no argument at all from Grant, who confesses, “Bri’s 10 times better than I was. Bri can pass, set, serve. Do it all. My job was basically attacking. I broke a lot of noses, hit a lot of eye sockets. I think Bri’s a silent killer.”

In truth, they’re an incredibly close pair, a tight bond forged forever stronger after Brian and Javonne left their eastern New Orleans home that was destroyed by the ravages of Hurricane Katrina in 2005 and then split in a divorce a year later. J

avonne settled in her remote hometown of Kendleton southwest of Houston and eventually remarried. Bri was 6 when they relocated.

“She actually favors her dad in looks,” Grant said, “but she got her athleticism from me.” But her dad played basketball at a New Orleans junior college and a cousin, Lamar Lathon, played linebacker for the Houston Oilers.

Butler grew into her body, sprouted up more than two inches during middle school and her talent became so obvious that she stopped playing for the Boling High School team after the 10th grade to specialize with elite volleyball clubs in Weimar and Houston.

She’d tried basketball in junior high when the coach begged her to play, but she doesn’t really like contact. She tried her hand at track and, in spite of practicing only one day a week, had enough raw talent to finish fourth in the Class 3A state track meet in the 400 meters as a freshman.

But her future was volleyball.

And while she visited Rice and Florida, and USC’s Mick Haley recruited her just as he had Bri’s mom years earlier, Butler knew she’d always wind up at Texas, close to home. Unlike her mom, who spurned Haley’s request to become a Longhorn and redshirt, Butler did show up here. Early, in fact, as a mid-semester graduate. And as the No. 2 recruit in the nation — behind Lexi Sun, who also signed with Texas but transferred to Nebraska after one year — Butler did redshirt, sitting and learning behind career blocks leader Chiaka Ogbogu, watching the four-time All-American’s every move.

Jerritt Elliott knew Butler would shine, once she had the middle blocker position to herself after that first season. And he’s watched her mature into the dynamic player she is today after an emboldening, summer stint with the gold medal-winning U.S. team in Peru last summer. However, she suffered a foot injury that kept her sidelined for nine matches.

“Bri is one of the most dominant middle blockers in the country,” Elliott said. “We’ve had to monitor her practices, and her rhythm was in flux, but when she goes to that next level, she’ll take us.”

She may be getting there quickly. So will the Longhorns.

“Bri’s had a huge impact,” All-Big 12 teammate Skylar Fields said. “I think she brings a certain kind of intensity because when she gets rolling, you can’t stop Bri. Bri’s a monster out there. It pumps everybody else too.”

Once Butler returned to the starting lineup, Texas’ opponents have had no answer for her. Having gone 7-2 without her, the Longhorns have won 14 of their last 15 matches with her swatting balls back with regularity. With a healthy Butler, Texas is poised to make a serious run at the Final Four with a bracket that includes one-time loser Western Kentucky, Minnesota and Florida.

“Oh, definitely,” Butler said of Texas’ chances at a title. “Texas is going to win.”

The last six matches, no opponent has hit better than .197 against Texas. The Longhorns have improved in blocking from 126th in the nation to 17th. Rivals rave about Butler’s quickness and physicality at the net. She can rise up to approaching 11 feet and can even maneuver around triple-teams.

“The players were joking that this is Middle Blocker U,” Elliott said. “We’ve had Rachel Adams, Chiaka, Lauren Paolini. A lot of great middle blockers in this program. It’s been fun to see. It wouldn’t be a surprise to see two of our middle blockers on the U.S. Olympic team next summer. As she continues to mature, she has the upside to be at that same level and the skill set.”

So does her mom.

Elliott joked that he wishes he could screw off his head and put it on Butler’s body.

“At times, she’s got a little nasty streak in her. It’s about getting that nasty streak out of her,” he said. “I’m always giving her a hard time. She doesn’t know how good she is. She has all the pieces and she can control a game from an emotional standpoint both offensively and defensively.”

Butler may know more than she lets on. She’s on a mission to improve, hopes to embark on a pro career and eventually become an anesthesiologist. For now, she only has volleyball on her mind.

“I think I can get better,” she said. “I’m seeing my game go to a higher level.”

It will happen. Bet on it.

“I couldn’t ask for a better daughter,” a beaming Grant said. “We’re like sisters. I’m the older, bigger sister.”

And equal but quite different killers on a volleyball court.