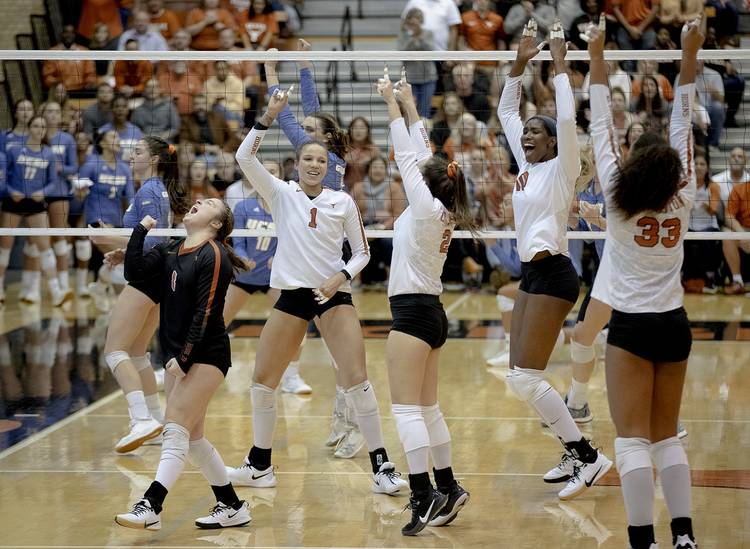 No one promised Texas an easy stroll through the NCAA volleyball tournament even if the bracket appeared friendly on initial inspection.

The Longhorns, who are the No. 2 overall seed in the tournament, found out early that looks can be deceiving and it nearly cost them their postseason dream on Friday night before it really got started.

One night after blowing past past Albany in the NCAA opener, the Horns nearly met an unexpected end. The unheralded UC Santa Barbara Gauchos were not interested in the chalk that often accompanies the top of an NCAA bracket. They staggered the favored Longhorns time and again and came within a few shots of pulling the upset of the tournament.

As the old saying goes, what doesn’t kill you will make you stronger.

“That’s the hard way,” UT coach Jerritt Elliott said to our own Danny Davis before the post-game presser.

His Horns didn’t die Friday night. The five-set win was a timely show of will by a team whose coach admittedly emptied his mental bag of tricks in trying to get the right mix of physical play and mental balance this season. They overcame what Elliott described as some “glassy-eyed looks” at times to find their way to the Sweet 16.

Skylar Fields’ game-ending kill was met with a standing ovation at Gregory Gym and a sense of relief with Longhorn Nation. The 15-10 score didn’t accurately illustrate how close the 23-3 Horns came to elimination.

“We’re young and there’s nothing like experience,” Elliott said. “When we get determined to play Texas volleyball, and that’s an aggressive behavior, we’re talking, we’re looking at each other the right way, our communication, we’re dialed in to what we’re doing, we’re really good.”

They survived and they advanced. That’s the name of the game at tourney time and huge props have to go out to the big-hitting trio of Micaya White, Brionne Butler and Logan Eggleston, who combined for 53 of Texas’ 63 kills. Butler, in the middle, added 11 blocks. Claire Hahn led the back end with 15 digs.

Elliott’s best move may have been to insert senior Autumn Rounsaville at libero to give the team a lift after the third set. Turns out everything worked just enough to push the Horns forward, even if it didn’t come as easily as many expected.

The road to a championship can include some unexpected twists and turns, but the key is to learn from these experiences. It also helps to have the support of a few important people who have traveled a similar path.

Former UT players Khat Bell and Haley Eckerman have traveled these NCAA tourney streets, teammates on the 2012 national championship team. They spent Friday night getting fans in their section pumped and Bell even went over to the Texas huddle to give the team a spirited pep talk after the Horns dropped the second set to fall behind 2-1. After she finished, she went back to a spot near the bench where she danced alongside Elliott’s wife Andrea between during timeouts.

“It’s important to have someone that has come before them to inspire them and let them know that I’ve been here before and I know how to get there,” Bell said. “I told them that right now, we’re a little messy with a few individual plays, but it’s time to come together as a team and put the game away.”

The Horns listened because they know Bell and Eckerman have the receipts. Their 2012 team was down 2-0 in the national semifinals to unseeded Michigan, which had already vanquished title contender Stanford in the regional final. The Horns pulled it together and won three sets before sweeping Oregon for the championship.

“It’s so important,”she said. “Khat came over and really just started hyping us up. We all fed off her energy.  We have a lot of respect for her. She’s been here before and she’s gone through it.”

Texas woke up Saturday in the Sweet 16. The stuff that happened before can be viewed through a lens of being a survivor eager to take on the next challenge.

They’re still in the tournament. That’s all that matters.

Bohls: Dominant LSU belongs at the top of the rankings