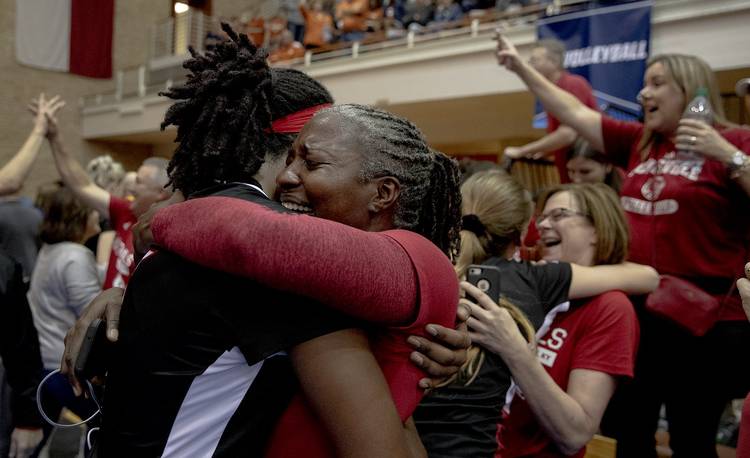 Louisville opposite hitter Aiko Jones (15) hugs her mom, Paula-Anne, after defeating Texas 3-2 in the third round of the NCAA volleyball tournament on Dec. 13, 2019 in Austin. [NICK WAGNER/AMERICAN-STATESMAN]

Louisville players were the ones dancing off the court, celebrating with their parents and embracing their coaches.

Meanwhile, the Texas Longhorns and coach Jerritt Elliott were the ones hit head-on with the reality of tournament elimination well before the desired destination. They have a young roster, but their talent should have been enough to beat a nine-loss Louisville that did not beat a single ranked team during the regular season.

Advertisement
Texas avoided getting boat raced, but the Cardinals raced out to an early lead in the fifth set and finished off the Horns, sending them to their earliest offseason since 2005. Around that time, championships were falling from the sky on campus.

The 25-22, 25-22, 17-25, 18-25, 15-12 loss will stick in Elliott’s craw for a long time. He will ask himself how the Horns weren’t able to gut out a win at home with the season on the line. He will challenge his players to dig deeper at money time and he will have to ask himself tough questions about his team’s mental focus “when things go south,” as he said.

A 23-4 finish looks good on paper, but the Horns underachieved as it turns out. There was a feeling walking out of Gregory that the best team didn’t win even if Louisville held the edge on the scoreboard despite being outhit .320 to .235.

That’s where the intangibles come in. The Horns didn’t play enough of the big points well, including a second set meltdown where Louisville turned an 11-4 deficit into a two-set lead. The Cardinals played fearlessly and Texas, more often that not, came up on the short end of the meaningful rallies. Worse yet, the Horns committed 15 serving errors, eight more than their opponent.

The true measure of a team is how it plays in the tightest matches. The Horns are good, but that 1-4 record in five-set matches is telling and it starts up top with the coach. This team has a ways to go before it can reach the mental toughness of that 2012 title team that recovered from an 0-2 deficit to take out Michigan en route to a national title.

Some days the ball doesn’t bounce your way, but sometimes you notice that the other team just seems to have more of a connection when it counts the most. This was the case Friday. Texas was bigger and deeper, but the Cardinals were better because they played in a calmer rhythm for the majority of the game.

Outside hitters Aiko Jones and Anna Stevenson combined for 37 kills — matching the total of Texas counterparts Micaya White and Logan Eggleston — and their teammates provided enough scrappy support to make this upset possible. Elliott noticed the chemistry on the other side of the net. It’s something he must develop in his on the court and in the locker room to avoid future disasters like this one.

“That was the difference in the match,” Elliott said. “They were connected and they were prepared. For me, that was one of the biggest keys, the competitiveness of this match. They stepped up and played really well and served and passed well. Jones had a monster night. We knew she was good and we couldn’t contain her.”

Elite teams hit patches like these, but Texas’ problem didn’t appear to be physical but between the ears or in its chest. Elliott will have to find a few more alpha females, especially with White departing. Her final match was supposed to come next weekend in Pittsburgh, not at home in the Sweet 16.

Louisville  was supposed to be just a small piece of work. The  five-set win over UC Santa Barbara in the second round had already been filed away as a learning experience that would propel the tournament’s No. 2 seed upward and onward as the tourney field whittled down to the elite.

In advance of Friday’s match, White made a statement that proved prescient.

“We just need to hit them first,” she said this week.

It didn’t turn out that way. Louisville hit Texas first then second and by the time the Longhorns woke up, they were down two sets and staring an embarrassing exit in the face. It turned out to be a real dogfight.

Texas regained its groove to make things interesting. With White and Eggleston leading the way, Texas found its equilibrium and boat-raced the Cardinals in the third and fourth sets to the delight of a sold-out crowd.  The place was rocking before the fifth set began as Guns N’ Roses’ “Welcome to the Jungle” blared from the speakers. It was time for Texas to be Texas. It was time for the Horns to do what great teams do: Put the underdog in its place. Louisville would have none of it.

There was no closing gear for the Horns and that’s something Elliott will grapple with this offseason.

“It sucks a lot,” Eggleston said. “I love this team so much. We had such a great year and It’s really sad that it ended like that.”

The Horns had a finely paved road to the Final Four and the advantage of playing the first four rounds on their home court. White, one of the best players on the planet, will leave here without a championship and the program will face an offseason of questions, the biggest being if they can get mentally tougher.

This wasn’t supposed to happen to Texas. But it did.

It’s up to Elliott and Co. to figure out why.

Craven’s Corner: Our hot betting streak hopes to trickle up to the NFL

Craven’s Corner: Betting on Dallas or Philadelphia? Someone has to win, right?