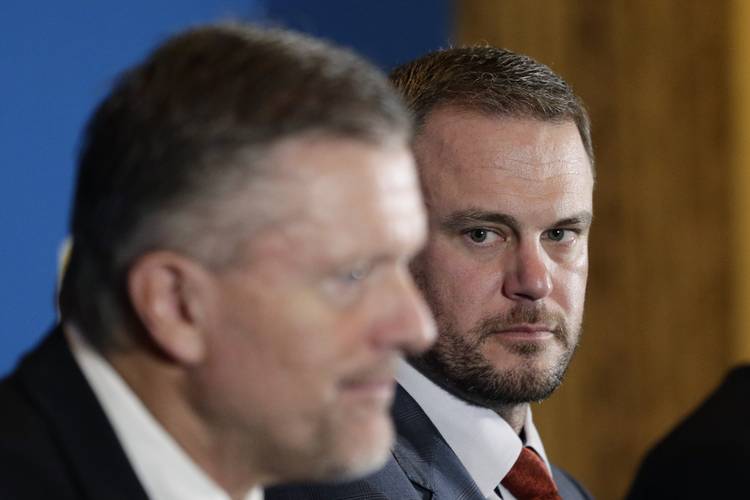 SAN ANTONIO — For Tom Herman, 2019 probably can’t end soon enough, which is saying something since he got a $1 million retention bonus this week for just being on the job.

What started with a bang in a milestone victory over an apparently complacent Georgia team in the Sugar Bowl became a bust in November and will end with another bowl matchup with yet another frustrated CFP contender in a season that has threatened to become a millstone around his neck.

All in all, it’s pretty much been a disaster since Georgia.

September brought promise against LSU, which looked every bit the national championship contender in a romp over Oklahoma on Saturday. October fomented frustration, and November was downright depressing with flat performances in losses to Iowa State and Baylor.

December has been a decidedly mixed bag for the Longhorns coach.

For every correct staff change that Herman made, there was a public-relations nightmare on Longhorn Network, the most recent where he did his best Bud Adams impersonation with a profane, two-fingered salute that defies explanation. Especially his weak alibi. That’s yet another sign Herman lacks the maturity to run this program. Next thing you know, he’ll be head-butting his players without a helmet. Oh, wait.

Asked if Utah head coach Kyle Whittingham has ever head-butted a player, Utes defensive coordinator Morgan Scalley said, “I don’t think I’ve ever seen that before.” But Scalley, whom Herman talked to as a possible replacement for Todd Orlando, said he has “nothing but respect for Tom Herman.”

For every player like four-star receiver Quentin Johnson who decommitted and signed with TCU, there was the overwhelming upside with the loyalty of Longhorns signee Bijan Robinson, maybe the best running back prospect in America. That’s a huge win, a statement win.

For every Jordan Whittington surgery — two and counting — to correct a chronic groin problem, there were signs that Collin Johnson’s chronically balky hamstring was well enough to play in the upcoming bowl game. Makes one wonder if we’ll see Whittington in a UT uniform, but it’s a good look that all the seniors chose to play in the bowl game.

For every attempt Herman made to lure Graham Harrell away from USC to become his new offensive coordinator, there were reports he would not give the former Texas Tech quarterback and Texas-killer the necessary autonomy to make the move. That sounds like a big mistake and suggests Herman doesn’t know how much trouble he’s in.

Herman is signed through 2023 with a guaranteed buyout approaching $24 million, but can Texas afford to sit idly by with blind hope if 2020 resembles 2019? Probably not. Next season brings a heightened sense of urgency, that is, if Texas truly wants to return to national prominence.

As we said, however, it’s been a mixed bag this month, but so have been the last three years. So basically nothing’s changed.

With that as a backdrop, it’s safe to ask. Has the die been cast for this 44-year-old coach who was thought to be a no-brainer of a hire three seasons ago but to date has sandwiched two highly disappointing seven-win seasons around a 10-4 outlier?

Or has Herman righted the ship, on the verge of replacing coordinators with quality hires on both sides of the ball, and ready to convert a third straight highly-ranked recruiting class into a legitimate championship program.

Which is the real Herman? What shape is the program really in?

The truthful answer is no one knows. Not even Herman. Or Chris Del Conte, who brazenly gave the unproven coach an unnecessary extension, or Gregory Fenves, who signed off on the same. But Herman’s seat is definitely hot.

We do know that Herman is not well-liked by Longhorn Nation. But that said, he has recruited like gangbusters, which says Herman is a top-notch recruiter or Texas recruits itself with a brand that’s too powerful to fail, at least on signing day. As bad as the Charlie Strong era was, he still put together recruiting classes ranked 17th, 10th and seventh nationally.

“Absolutely he is,” senior safety Brandon Jones said Saturday, when asked if Herman’s still the right man for this job. “He’s the perfect guy for this spot. He’s doing a fantastic job.”

If last year’s New Orleans heights and this year’s 7-5 depths tell us anything, it’s not to make too much out of a single game. Win or lose.

A win in the Alamo Bowl would make for a nice change in narrative after four losses in the last seven games — three by a touchdown or more — and lethargic performances from Fort Worth to Ames to Waco. But a defeat at the hands of an ascending Utah team that badly stubbed its toe against Oregon in the Pac-12 title game shouldn’t condemn Texas to mediocrity in the next decade, either.

So which is the real Texas? And the real Herman?

Will the Longhorns make another statement and whip a fringe CFP team that has already won 11 games? Or will they remain their inconsistent selves and barely show up against a quality Utah team has an outstanding defense and great quarterback-running back tandem in Tyler Huntley and Zack Moss?

But it’d be nice to see less gimmick and more game. Less player-kissing and player head-butting and finger-uh-pointing, and more signs of solid fundamentals and maturity.

Now the Longhorns prepare to close out a decade that includes at least four losses in every season and seven losses in four different years, two lonely Big 12 titles since 1996, and one post-season ranking higher than 19th (ninth last year) and nary a sniff of a national championship they won or flirted with in 2004, 2005, 2008 and 2009.

Will they contend for one in 2020? Or will they lose at least four games and put Herman squarely on the hot seat?