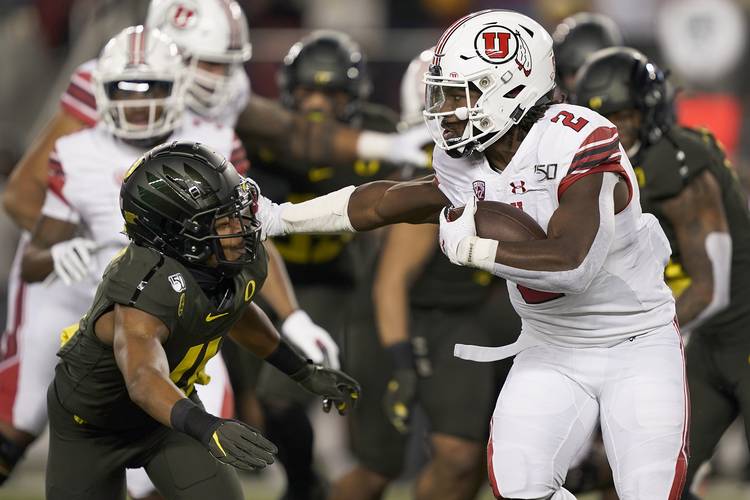 SAN ANTONIO — So after surviving a 7-5 season, the Longhorns have traveled to the traditionally strong Alamo Bowl where they will find yet another football program that’s better than them.

But that’s not that insulting because their opponent is top-shelf and on the move.

It’s hard enough for Longhorn Nation to accept that its program has been lapped by the Clemsons, LSUs, Alabamas, Ohio States and even the Oklahomas that keep winning the Big 12 year in and year out before embarrassing itself in the CFP.

Yes, those same 11-2 physical Utes that came within an eyelash of bumping the Sooners out of the Final Four when they won eight games in a row before flopping against Oregon in the Pac-12 title game.

The list unfortunately is growing. But here’s a chance for the under-achieving Longhorns to correct some wrongs and make noise that they are on the rebound against a non-brand but growing team that joins others like Baylor, Minnesota and Mack Brown’s North Carolina as teams on the clear ascent.

Few of you probably recognize Utah as a rising powerhouse. You may still wonder if Joe Pesci can explain the difference between a yute and a Ute. (The team honors the proud Ute Indian tribe, 3,300 strong, that has lived in the Salt Lake City area for over 1,000 years and was the first to use horses as modes of transportation.)

But the Utes are also one of the, say, top 12 programs in the nation under Kyle Whittingham, the best coach in college football no one ever talks about. Utah could be the most under-appreciated program in the country.

So is Utah under the national radar?

“Yeah, definitely,” said its senior quarterback Tyler Huntley, who has passed Alex Smith with 23 career wins and has thrown for more than 7,000 career yards. “Utah hasn’t been on the map for a little bit now, and it’s an improvement of the program. We’re making great strides. I feel like we don’t get that exposure as other teams on the other (coast), but we’ll continue to go out every week and try to show everybody why Utah should be considered whenever you’re talking about good teams.”

When I asked Ute defensive coordinator Morgan Scalley if that was an accurate perception, he humbly said he didn’t know.

“I know that we love our players, and Kyle Whittingham, I could not coach for a better man,” said Scalley, who had a conversation with Texas’ Tom Herman about becoming the Longhorns’ new defensive boss but quickly shut it all down. “He runs a quality program. He preaches integrity. And if you’re soft, this ain’t the program for you. Coach Whittingham keeps his players and coaches accountable.”

Scalley said he has big respect for Herman, but Whittingham just won the Bobby Dodd Coach of the Year award for his leadership, ethics and success.

“They play really hard,” Hand said. “That’s the thing that probably stands out the most.”

Here are some more of the Utes’ credentials.

Utah has won the Pac-12 South the last two years. Whittingham has the second-best bowl winning résumé in NCAA history with 11 victories in 13 tries. Utah has won nine games or more five of the last six seasons. It’s got top 10 talent at quarterback, running back and defensive line.

Huntley, who along with All-America tailback Zack Moss and receiver Demari Simpkins, all hail from the Miami area and bring a lot of swagger to Utah. Huntley said he tired quickly of the recruiting hustle and was lured to Salt Lake City by running backs coach Dennis Erickson for the chance to start quickly.

Utah has targeted the state of Texas as prime recruiting grounds just as the Longhorns obviously and have landed prospects like Katy tight end Brant Kuithe, who caught two touchdowns in a lopsided loss to Caden Sterns and Cibolo Steele in the state semifinals in the Alamodome.

“We’ll get more exposure with games like this,” Kuithe said. “I’d probably say this season really helps us get in the spotlight more.”

Scalley recruits the Lone Star state as one of three Ute coaches who mine the talent here. Utah claims 11 Texans on its roster. Only Utah (29) and California (29) produce more Utes than Texas.

“The majority are going to be within our Pac-12 footprint,” Scalley said. “We draw the majority of our skill players out of California. Florida has become a big part of what we’re doing recruiting-wise. But three (coaches) in Texas just because we’ve had strong relationships there and have been able to get some quality players.”

Huntley had no interest in sitting the bench in college for long, but said he “would have beat out Tua (Tagovailoa)” if he’d gone to Alabama and said he’d love to someday play for the Dallas Cowboys. Surely he doesn’t think he’s better than Dak Prescott, does he?

“I’m very balanced. I can do a lot of good things,” said the 218-pound Moss, who has 26 catches to go with 15 rushing scores. “Texas looks very athletic and has the look of a lot of NFL players, but they can be undisciplined at times. You can’t tell how physical a team is on tape.”

Make no mistake that Utah clearly is, especially on the defensive line with All-American end Bradlee Anae, who has 29.5 career sacks, and mammoth tackle Leki Fotu who has 17.5. Naivar says Utah reminds him of Kansas State with its tough mindset.

Like Texas, Utah has taken some hits in its secondary and approaches Tuesday’s game without its star lockdown cornerback, Jaylon Johnson, who opted to sit out for NFL preparations, and an injured safety. Texas can relate because everyone in its secondary has been X-rayed, poked, prodded and hurt.

Oh, and Whittingham has a 2-0 record in New Year’s Six bowls and has his own record over an SEC power (Alabama in the 2009 Sugar Bowl although we presume the Crimson Tide didn’t care).

Don’t think for a second motivation will be any issue for Utah like it may have been for Georgia last year.

And damn good, too.