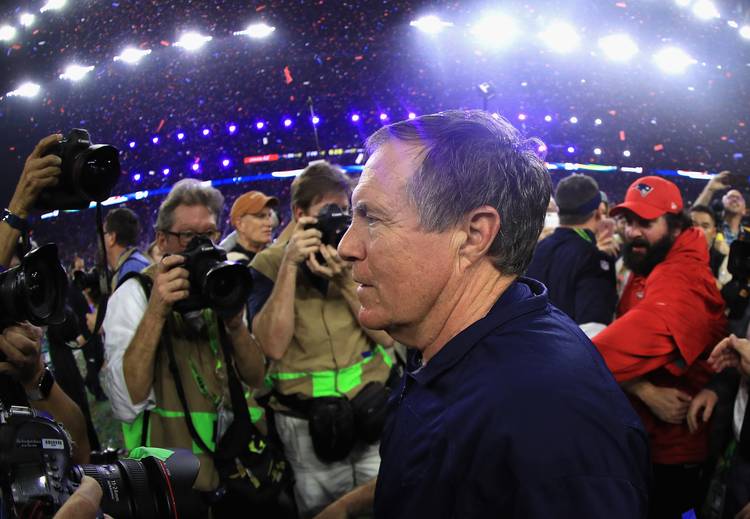 Head coach Bill Belichick of the New England Patriots reacts after defeating the Atlanta Falcons 34-28 in overtime during Super Bowl 51 at NRG Stadium on February 5, 2017 in Houston, Texas. (Photo by Mike Ehrmann/Getty Images)

Craven’s Corner returns after a week’s hiatus to spend our winnings on holiday festivities. We cashed on Baltimore +300 to win the AFC North while on break. New Orleans to win the Super Bowl at +850 is still alive entering the NFL playoffs with the Saints set to host the Vikings on Sunday.

This Corner concentrates on wild card weekend. Our season record is 64-52-3 with future wins in college and NFL already cashed and a 23-7-2 since mid-November.

Bills +3 over Texans: Books consider this a tossup on a neutral site, with the Texans receiving the customary three points at home. Houston isn’t trustworthy in the playoffs under head coach Bill O’Brien, after home playoff losses in 2018, 2016 and 2015. The Bills defense is the difference and the reason I’ll take the Bills and a field goal. The public doesn’t believe in this Buffalo team despite ample evidence, so let’s take the road dog against a team without a real home-field advantage.

Patriots -4.5 over Titans: I normally refrain from giving more than a field goal in the wild card round, but let’s make an exception for New England and Tom Brady. A lackluster regular season almost makes me believe more in the Patriots. New England missed out on a first-round bye with a Week 17 loss. Expect Brady and company to make a statement against a Titans team happy to make the playoffs.

Vikings +8 over Saints: This is a hedge bet since we took New Orleans to win the Super Bowl. Giving the eight points means New Orleans can win and we can still cash if the Vikings can keep the game within one score. A dominating performance by the Saints simply makes our +850 ticket to win the Super Bowl look even more promising. Eight points is too much for me to give early in the playoffs. The Vikings are a capable team that won’t be scared of the atmosphere or opponent.

Seahawks -2.5 over Eagles: Seattle came a foot short of winning the NFC West and earning a bye to the second round. Instead, San Francisco held on fourth down to clinch the division and force Seattle to play an Eagles squad limping into the postseason. Philadelphia is outmatched in this game and the Seahawks should win by at least a field goal despite a trip to the East Coast.