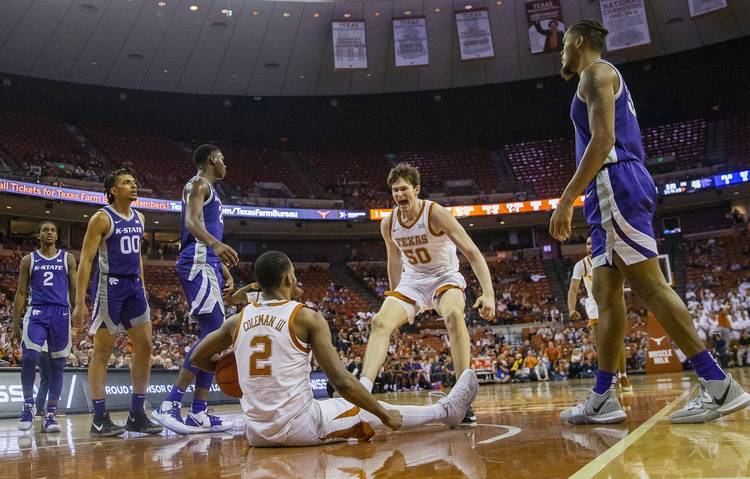 Texas Longhorns center Will Baker (50) celebrates with Texas Longhorns guard Matt Coleman III (2) after being fouled by Kansas State Wildcats forward Montavious Murphy (23) on a three point play in the second half of an NCAA college basketball game, Saturday, Jan. 11, 2020, in Austin, Texas. [RICARDO B. BRAZZIELL/AMERICAN-STATESMAN]

If ever there was ever  an early-conference game that was deserving of the “must win,” label, it was Saturday’s Texas-Kansas State matchup.
Both teams were desperate to scratch out that first conference win, especially Texas which needed to book a “W” to add to their sagging NCAA tournament resume’.
The Longhorns aren’t built for comebacks so it’s imperative that they play from ahead whenever possible and hope they can get enough stops to gut out a win.

That formula worked for the first time Big 12 play against a K-State which spent more time than they should have on an icy runway in the Little Apple Friday before their flight to Austin was pushed back a day.
“It was raining ice,” said coach Bruce Weber.
By the time the Wildcats took took the floor Saturday night just a few hours after landing at Bergstrom, something else was falling at Club Erwin.
Texas three-pointers.
“They made 10 of 23,” said an exasperated Weber who, like everyone else Texas has played, was content to allow the Horns to fire away from behind the arc. Add to that, the Horns put the clamp-down on the visitors, playing one of their most complete defensive games of the year.
The 64-50 win wasn’t a Picasso — to steal a line from embattled coach Shaka Smart — but when you’re struggling the way the Longhorns have struggled, there is no such thing as an ugly win.
As a result, the roof of the Erwin Center isn’t about to cave in just yet because the Horns just took a step toward righting their ship to improve to 11-4 overall and 1-2 in the Big 12.

The old church hymn goes along the lines of “It only takes a spark to get a fire going” and the Horns have their spark, thanks in large part to a defense that held the Wildcats to a season low in points.
The big challenge will come down to if they can take show on the road, minus the 20 turnovers of course. Repetition is the pretty sister of success. We all understood that the Horns were never going to get anything going to until they booked one — just one — Big 12 win and while the treading has been tough in the first couple of league games — an offensive no-show at Baylor and a second-half disappearing act against Oklahoma — this starving fan base was given a real treat against K-State: a chance to watch the Longhorns push around a conference opponent for the first time in a quite a while.

Advertisement
They held K-State scoreless for the first eight minutes of the second half and forced six shot-clock violations, 18 turnovers overall. Forward Jericho Sims is the best player on this team but Texas’ fortunes will ultimately rest with how the guards perform and on this night, Matt Coleman, Courtney Ramey, Jase Febres and Andrew Jones gave great energy, particularly on the defensive end where Ramey held the talented Xavier Sneed to only five points on 1-of-8 shooting. Febres, who is developing into a nice defensive player, recorded a career high four blocks.
“I used to do this in high school,” said the 6-foot-5-inch Febres. “I’ve felt like I’ve been able to do this but when you get to college, I’m a little guy now.”
Ramey, also knocked three triples and handed out eight assists, including a couple of nice lobs to Sims.
Defense is the best friend of a struggling offense and knocking balls loose can lead to some easy buckets. At one point early in the second half, Coleman deflected a ball out of bounds and pointed across the way to Smart who gestured to the statistician to mark it down. Apparently, deflections are a big deal at Texas.
“When we get 32 or more deflections since I’ve been a head coach we’ve won every game but one,” Smart said. “It’s a big deal to our coaching staff. We are trying to make it a bigger and bigger deal to our guys. I tell our guys all the time, when this stuff matters as much to you as much as it does to us then we really really got something.”
Texas hadn’t played this complete of a game in conference play since, well, since their its last conference win, against Iowa State early last March. Wednesday’s game against Oklahoma State is winnable but this team isn’t good enough to take anything for granted, especially after last season’s 61-58 loss where Texas missed 20 of 22 three-point attempts and played with the energy of a sloth colony in the first half before waking up later.
For now, some pressure has been lifted. They have an all-important conference win and a formula to possibly get more, that is, if they can figure out a way to duplicate this effort. Now that’s something we haven’t witnessed on a consistent basis in years.
There’s no time like the present.