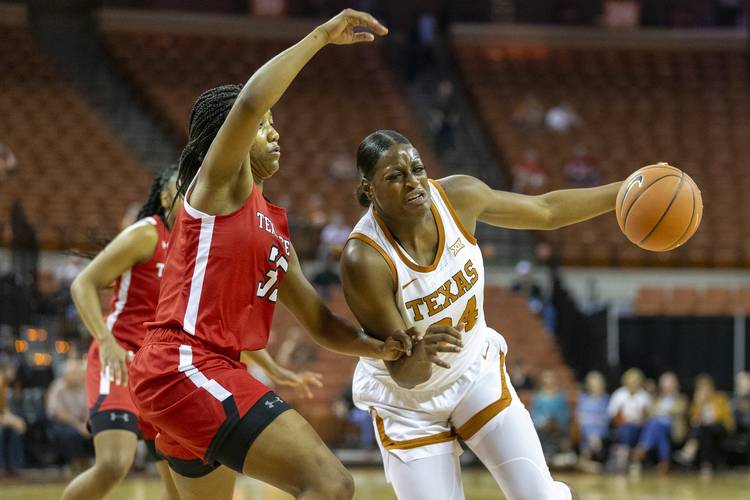 Let the big girls lead the way and the others will follow.

When Charli Collier and Joyner Holmes are controlling the paint like they did Wednesday night against Texas Tech, the Longhorns can play with anybody.

Even better for Texas is the presence of experienced guards Sug Sutton and Lashann Higgs, who have had some humongous games in the past but are savvy enough to know when to turn on the offense and when to play complementary roles.

The 92-66 home win was comprehensive in scope because the Horns played with the type of balance we watched in that spectacular 69-64 win over No. 1 Stanford. Texas rode the long arms of Collier and Holmes for most of the way and Sutton did a great job of keeping her fellow perimeter players involved as the Longhorns pulled away late.

Techs 6-5 post Brittany Brewer is the only player in the country averaging 15 points, 10 rebounds and five blocks a game, but she had her hands full with Collier and Holmes, who combined for 40 points and 20 rebounds. That’s a scary stat line reminiscent of what 2019 national champion Baylor got on a consistent basis from posts Kalani Brown and Lauren Cox. The Texas bigs had good looks the entire night, a testament to the players setting the table out front.

“I don’t want to discount how they played at all, but I think that what makes our team more complete is if everybody shares and we don’t just depend on those two,” UT coach Karen Aston said. “I think really the difference in when we’re playing well and we’re not is when we share and everybody gets involved.”

Aston used the word “intention” three times in post-game interviews, each time directed at her guards who were really aggressive amid the dominant play inside.

Texas needed this one, both on the floor and on the bench. Aston is in the last year of a contract extension that she signed in 2016, after the Horns fell one game short of reaching the Final Four for the first time since 2003. It’s get-up-and-go time for her team. To her credit, she had the Horns ready to go after they allowed a winnable game get away at West Virginia on Sunday.

So how can they figure out a way to play like that night in and night out?

“If I had the answer, we wouldn’t have the games that we’ve had,” Aston said. “I’ll continue to try to find that answer because if we can find it together, whether it be the coaches or the players or all of us together, I think we’re a special team.”

It looked easy with Texas owning the paint against the 12-3 Lady Raiders. The 6-3 Holmes, who came off the bench in her 100th career game — Aston wants to see more from her in practice — has gotten over a severe case of Kobe-itis early in her career. Now fully understanding her importance on the interior, she has become a dependable producer while the 6-5 Collier, a sophomore double-double machine, could be an All-American by the time she’s finished here.

The win moved the Horns to 10-6 overall and 2-2 in Big 12 play — marks that aren’t going to make national waves at this point — but they have the makings of being a tough out come tourney time.

If they get in.

At the start of business Wednesday, the Horns had a RPI of 68, which would probably keep them out the Big Dance. On the bright side, conference record is a first marker for Power Five conferences. If the Horns finish near the top of the Big 12, they will improve that RPI and secure a spot, especially with a round-robin conference schedule that includes a pair of games against defending national champion Baylor, which snapped UConn’s 98-game home winning streak last week.

The league, by most accounts, is the third-best in the country behind the Pac-12 and the Big Ten, so in a sense, the Horns hold the keys to their tournament destiny. It’s about momentum at this point and Sutton was dead on when she laid out the goal moving forward.

“We have to win as many home games as we can in this league,” Sutton said. “I think it was very important to come out today the way that we did because we all felt like it was the end of the world after we lost against West Virginia.”

It’s not over by a long shot, but Texas has to build upon this momentum. The guards are good, but the bigs make things a lot less complicated when they’re terrorizing the opposition.

There’s plenty of time to make a case for the NCAAs. This was a nice step.